I was speaking recently via email with the great Holocaust revisionist Robert Faurisson and with an activist about families (children, wives, mothers, fathers) that oppose us. They do not listen to logic or truth… they just want us to stop, quiet down and say nothing.

Faurisson is going on trial on the 16th in Paris for this interview, where Paul-Eric Blanrue (also indicted) interviews Faurisson, who explains what motivated this graduate of the Sorbonne (the Harvard of France) Â to sacrifice his distinguished and comfortable academic career to proclaim the truth that the Jewish Holocaust by the Germans is a filthy lie, used to 1) produce guilt and extract money and support for Israel and 2) to enact outrageous laws prohibiting any criticism of Jews per se or of their horribleÂ hateÂ cult called Judaism. The Holocaust has made Jews into a master race.

Below is the Faurisson-Blanrue video with English subtitles that has led to this trial, which has been deleted off JewTube and now exists only on www.TruTube.tv,Â a vital utility for WNs, revisionists, truthers and birthers worldwide.Â I am proud to have helped to save it financially via many days, blogs and mass emails of energetic fundraising.Â

Delaney first made a big name for himself as an 9/11 activist (here at Mount Rushmore) and produced the film “911 Missing Links” — the first serious documentary that directly fingers Israel as the perpetrator, not promoting cowardly partial truths pushed byÂ
Alex Jones /Spare Change/Michael Moore about “the banksters , ” Big Oil and Bush and Cheney.” or “the Saudis.”Â 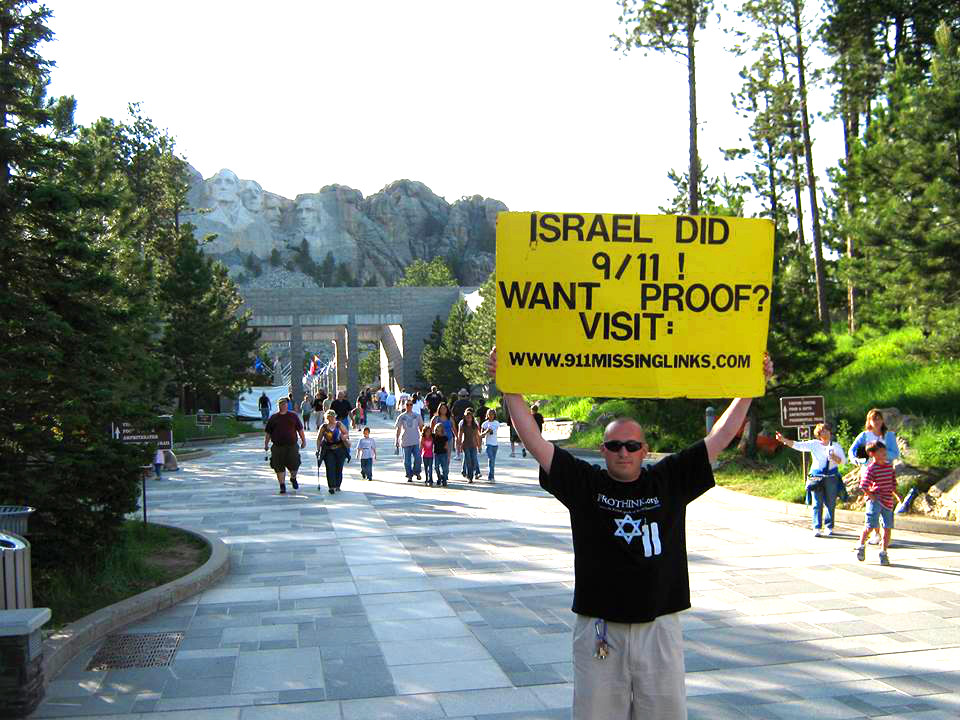 Delaney is a father of five and does not let that become an excuse to do nothing or quit! He fights on because of the 14 Words of David Lane, Â who died in ZOG-fed prison 2007 while serving an 197-year sentence (http://www.splcenter.org/get-informed/intelligence-report/browse-all-issues/2007/fall/domestic-terrorists):

“We must secure the existence of our people and a future for white children.” Â Â 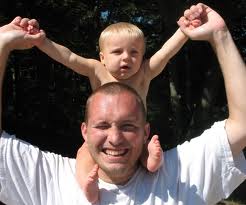 If we stop fighting, we are guaranteeing our loved ones have no future and no existence! We know the Jews’ intentions toward us! GENOCIDE!

This is the cover of the video: “A Man” ( = that is, not a hate-filled, fraud-promoting monster, as the French newsmedia depict Faurisson for 35 years now)

Faurisson was nearly beaten to death (jaw broken, ribs smashed) by a gang of young Jews a few months after I saw him speak in California at an IHR conference. What sacrifices have you made for the truth and the survival of our folk? 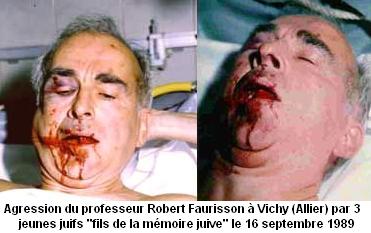 Here now is the inspiring video with English subtitles, FOUND ONLY ON TRUTUBE — and available only because certain heroic comrades have sent donations!

It just so happens that this very week I have been conversing with two awakened individuals who are being besieged by their families to quit the cause.

One is aÂ retired Air Force officer and very fine man, whose wife is battling him over his awakening to and wanting ot DO something about the Jewish threat to our survival.

And a high school teenager has awakened in oh-so-leftie Massachusetts (I lived there 1971-74 and 1995-2003) and his mother is fighting him tooth and nail, saying he will come to a bad end. She is looking up manic depresssion as the cause of his Nazism and reading SPLC publications about lost young people who become skinheads!

Of course, nothing either male says rationally has any effect on these worried females.

An Australian, theÂ Rebel of Oz, wrote me:

Yep, the one thing I have learned from the experience writing my open letter to my loved ones is that it doesn’t matter how well you argue your case. They are way too brainwashed to listen and think through your arguments — no matter how logic, sensible and documented.

It is more than brainwashing, which can be overcome by charm, determination, patience and facts.Â It is as the New Testament said 2,00o years ago (this phrase occurs 11 times!) : “fear of the Jews.” 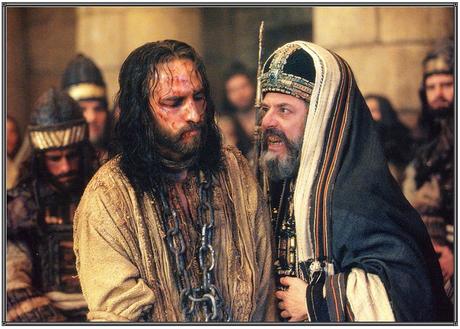 That FEAR is at the base of everything, whether they acknowledge it or not.Â Fear of retaliation, firing, ostracism, “hot water” in general

Yes, some unconscious fear of hell breaking lose onto them.

Even Hitler’s mother worried how he would end up! 😉 It is in August Kubizek’s book, ‘The Young Hitler I Knew’ ! 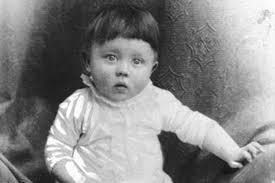 As a schoolboy he was fascinated by history and determined to stop injustice and change the world. 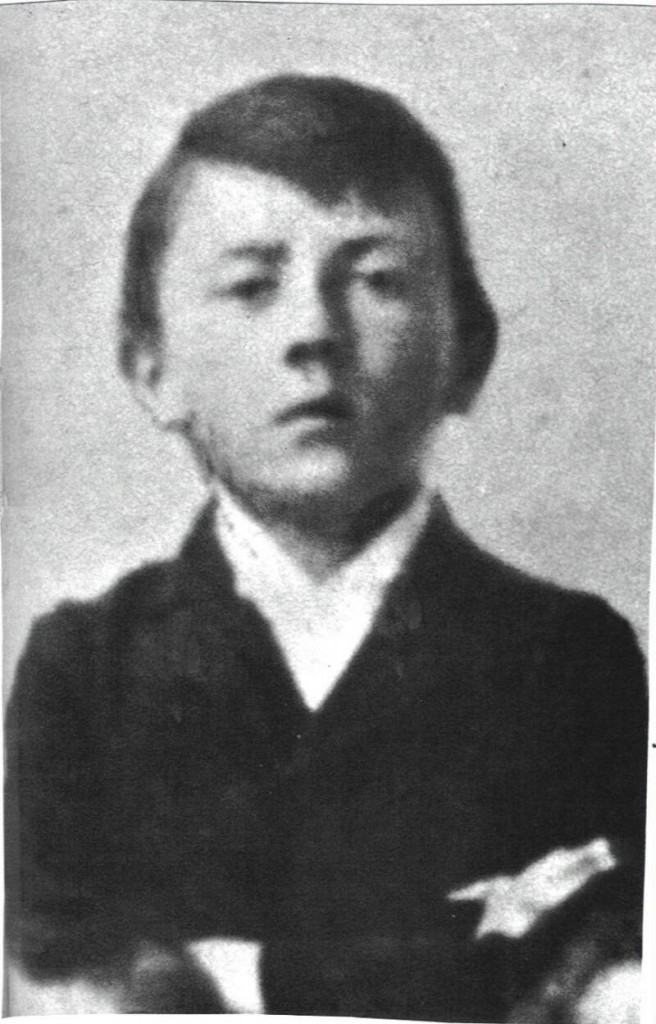 The Jews were certainly already powerful in 1900! Crushing enemies even then, and in France they had just gotten their precious traitor Dreyfus off.

Â I know two males who are having a battle, one with the wife, the other with the mother. I paraphrased to them something that you said once about men and women, and which I read in Vincent Reynouard’s magazine Sans Concession. He loved it and asked me to send him the text. 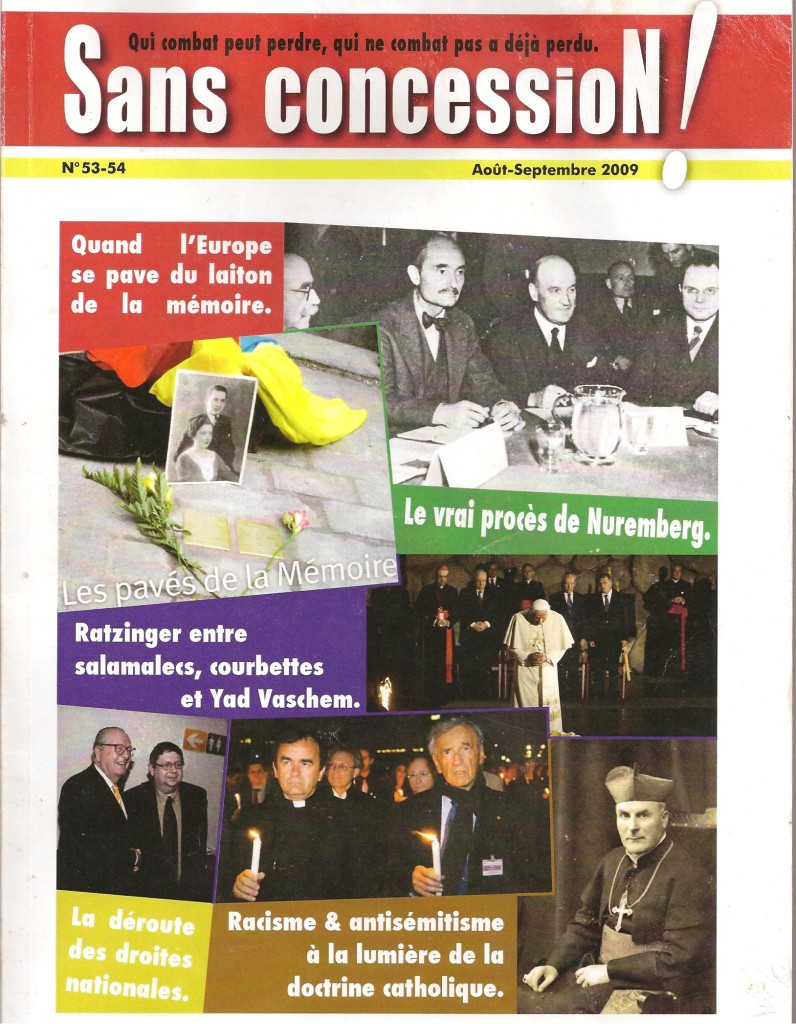 Â
I only had your observation from memory (we lost everything we owned last year, including our back issues of Sans Concession, and all the books of HervÃ© Ryssen, and were thrown on the street three times) but this is how I used it, from memory, and I added some details.
Â
The paraphrased quote from you is found here (at 11:41-12:45) : https://trutube.tv/video/13272/John-de-Nugent-Spiritual-Video-1-White-Destiny
Â
I think it is one of the most important things you ever said, Professor, and it was actually not about the Holocaust.Â

I replied: “Perhaps it is his first duty, but maybe it is his second duty.

Maybe the first duty of a man is to be a man.” 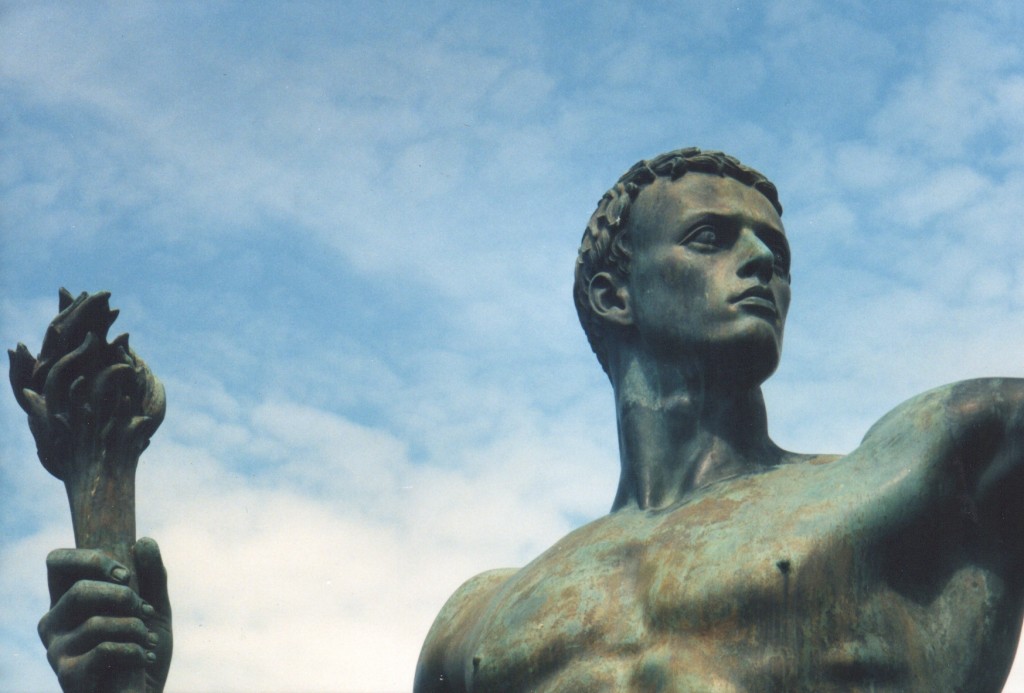 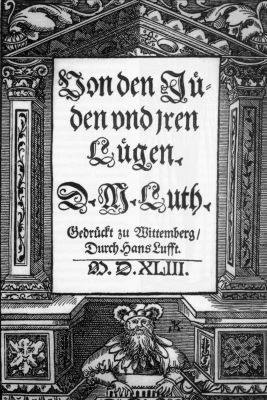 What shall we Christians do with this rejected and condemned people, the Jews? Since they live among us, we dare not tolerate their conduct, now that we are aware of their lying and reviling and blaspheming. If we do, we become sharers in their lies, cursing and blasphemy. Thus we cannot extinguish the unquenchable fire of divine wrath, of which the prophets speak, nor can we convert theÂ Jews. With prayer and the fear of God we must practice a sharp mercy to see whether we might save at least a few from the glowing flames. We dare not avenge ourselves. Vengeance a thousand times worse than we could wish them already has them by the throat. I shall give you my sincere advice:

First to set fire to their synagogues or schools and to bury and cover with dirt whatever will not burn, so that no man will ever again see a stone or cinder of them. This is to be done in honor of our Lord and of Christendom, so that God might see that we are Christians, and do not condone or knowingly tolerate such public lying, cursing, and blaspheming of his Son and of his Christians. For whatever we tolerated in the past unknowingly Â­ and I myself was unaware of it Â­ will be pardoned by God. But if we, now that we are informed, were to protect and shield such a house for the Jews, existing right before our very nose, in which they lie about, blaspheme, curse, vilify, and defame Christ and us (as was heard above), it would be the same as if we were doing all this and even worse ourselves, as we very well know.

Second, I advise that their houses also be razed and destroyed. For they pursue in them the same aims as in their synagogues. Instead they might be lodged under a roof or in a barn, like the gypsies. This will bring home to them that they are not masters in our country, as they boast, but that they are living in exile and in captivity, as they incessantly wail and lament about us before God.

Third, I advise that all their prayer books and Talmudic writings, in which such idolatry, lies, cursing and blasphemy are taught, be taken from them. (remainder omitted) 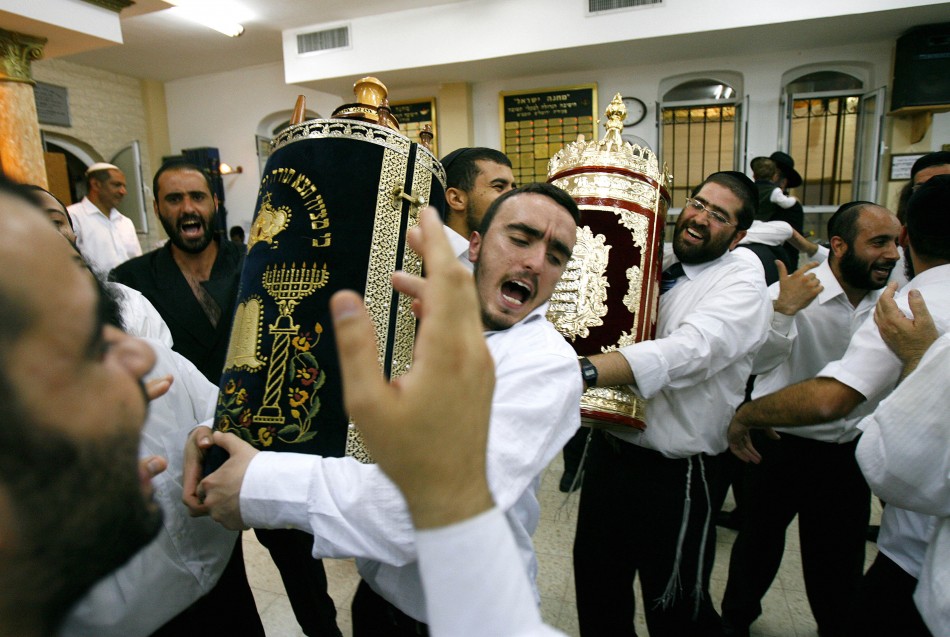 Fourth, I advise that their rabbis be forbidden to teach henceforth on pain of loss of life and limb. For they have justly forfeited the right to such an office by holding the poor Jews captive with the saying of Moses (Deuteronomy 17 [:10 ff.]) in which he commands them to obey their teachers on penalty of death, although Moses clearly adds: “what they teach you in accord with the law of the Lord.” Those villains ignore that. They wantonly employ the poor people’s obedience contrary to the law of the Lord and infuse them with this poison, cursing, and blasphemy. In the same way the pope also held us captive with the declaration in Matthew 16 {:18], “You are Peter,” etc, inducing us to believe all the lies and deceptions that issued from his devilish mind. He did not teach in accord with the word of God, and therefore he forfeited the right to teach.

Fifth, I advise that safeÂ­ conduct on the highways be abolished completely for the Jews. For they have no business in the countryside, since they are not lords, officials, tradesmen, or the like. Let them stay at home. (…remainder omitted).

Sixth, I advise that usury be prohibited to them, and that all cash and treasure of silver and gold be taken from them and put aside for safekeeping. 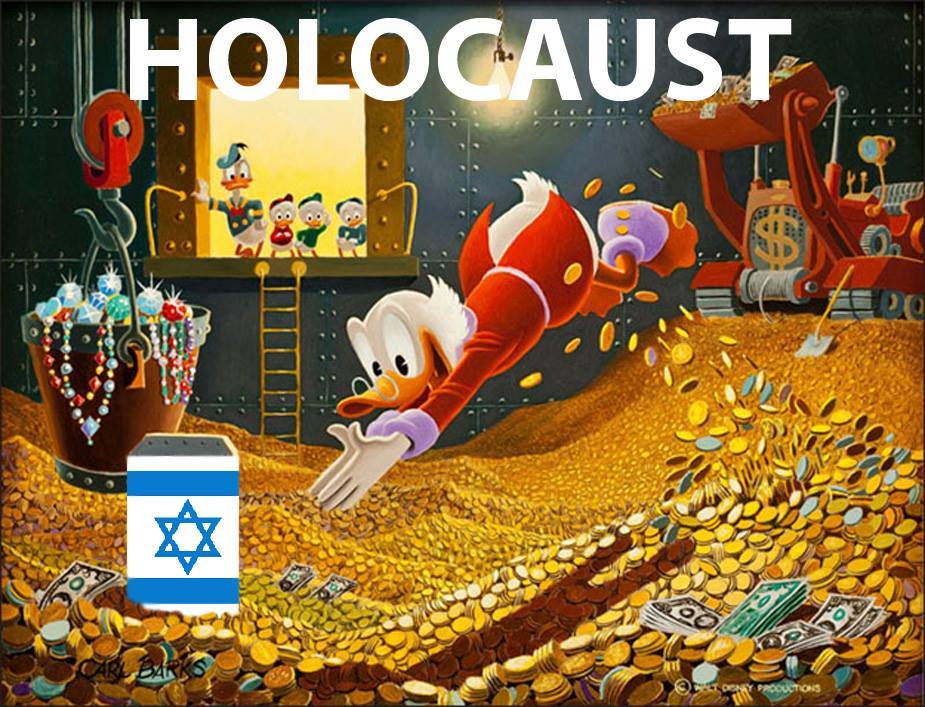 The reason for such a measure is that, as said above, they have no other means of earning a livelihood than usury, and by it they have stolen and robbed from us all they possess. Such money should now be used in no other way than the following: Whenever a Jew is sincerely converted, he should be handed one hundred, two hundred, or three hundred florins, as personal circumstances may suggest. With this he could set himself up in some occupation for the support of his poor wife and children, and the maintenance of the old or feeble. For such evil gains are cursed if they are not put to use with God’s blessing in a good and worthy cause.

Seventh, I commend putting a flail, an ax, a hoe, a spade, a distaff, or a spindle into the hands of young, strong Jews and Jewesses and letting them earn their bread in the sweat of their brow, as was imposed on the children of Adam (Gen 3[:19]}. For it is not fitting that they should let us accursed Goyim toil in the sweat of our faces while they, the holy people, idle away their time behind the stove, feasting and farting, and on top of all, boasting blasphemously of their lordship over the Christians by means of our sweat. No, one should toss out these lazy rogues by the seat of their pants.