Edited to add: I think Scott Adams is saying almost the same thing as I am in this blog post. â€œClinton won the debate last night. And while she was doing it, Trump won the election. He had one thing to accomplish â€“ being less scary â€“ and he did it.â€ â€“ He can hardly be less scary by attacking a woman ferociously. Read the whole thing.

The mewling over Donald Trumpâ€™s â€˜misogynyâ€™ in last nightâ€™s debate has begun. Trump interrupted Hillary, you see, and if you interrupt a woman, that means you hate not just her, but all women, everywhere. When a woman speaks, men must remain silent and never correct or contradict her mid-sentence because that makes her feel intimidated and the poor, weak, timorous thing might collapse from the sheer, unparalleled hatred of it all. No one seems to mind that the moderator interrupted Trump 41 times, and Clinton just 7 times, but Trump is a man and he can take it, right? Hillary is a mere woman, and one must treat her gently.

JdN: Even German newspapers were noticing Ill-ary’s recent bobble-head. I wonder what pep pill she was on for the debate? Hillary canâ€™t handle being interrupted, but she can handle Vladimir Putin?

Many polls this morning show that Trump won the debate, often with significant majorities. The media is so skewed, though, itâ€™s hard to draw any conclusions from these results. The Drudge poll has almost 700K voters at the moment, with just over 80% calling Trump for the win. Time Magazine has 1.5M voters, with 54% calling it for Trump and CNBC has 850K voters, with 66% handing victory to Trump.

I am going to call this a decisive victory for Trump, but not because of anything he said. Trump won by delivering a master class on how to fight with a woman and win. In general, men canâ€™t win fights with women. If you beat the crap out of her (metaphorically or otherwise), youâ€™re a bully who hates women, and not a real man. If you stand there and take a pummeling from her, youâ€™re a pussy who isnâ€™t a real man anyways. Fighting with a woman is almost always a lose-lose scenario. Thatâ€™s called male privilege, or something.

From the very first moment, Trump signaled his place at the top of the nationâ€™s hierarchy. He didnâ€™t need to do anything other than adorn his suit with a small American flag. For many undecided voters, it was over the moment they noticed Trump had a flag pin, and Hillary didnâ€™t. She looked nice. Her suit was a nice, bright red (power suit!) and her make-up and hair and earrings were all very tasteful and elegant. She looked pretty. As pretty as a slightly dumpy, frowny, overweight 60 something woman can look.

Trump looked Presidential. He looked like the quintessential patriarch. The man who will make the tough choices and accept the consequences. Hillary got turned into a pretty accessory. Had Hillary been a bit less polished, the media could have cried that she is being held to unreasonable physical standards, but since Hillary herself decided to meet those standards, the subject is now off limits.

Hillary played the girl-card, and in doing so, she invited Trump to treat her like a girl.

And for the most part, he did.

A lot of people are mad at both the moderator and Trump for not going after Hillary harder. The moderator likely choose to kid-glove Clinton because he doesnâ€™t want to get crucified like Matt Lauer did, but Trump had another reason entirely for handling Clinton gently.

He understands he canâ€™t win a fight with a woman, and certainly not with a woman who signals her femininity as strongly as Clinton did last night. Trump has some massive strikes left in his arsenal. Benghazi. The Clinton Foundation. Her private server. Immigration. The Second Amendment. Death Taxes. Billâ€™s rape roster. Big strikes. If and when he pulls them, he is risking the paradox of fighting with women. Nailing her to the wall can backfire on him badly, because many people simply cannot stomach seeing a woman take a massive punch from a man. No matter how much she begs for it. No matter how justified. For many people, you simply donâ€™t hit women.

Trump is walking a fine line, and he is taking his cues, it appears, from Hillary, which is the smart thing to do. He stood on the debate stage, and let her walk up to him. Heâ€™s the alpha, sheâ€™s the supplicant. That was perfect. He is very gently laying on a spanking, but only with her consent, and again, thatâ€™s exactly how you do it. Iâ€™m not an advocate of spanking children ever, but grown women are another story altogether. She may not know she needs it, but she probably does.

As long as Hillary never seems staggered by Trumpâ€™s blows, he can hit her. The minute the public perceives that he is actually hurting her, he loses. She gains the pity vote. Trump looks like a bully. A few whiny feminists insist he is a bully, because anyone who disagrees with a woman is a bully, period. But average people are watching to see if Trump can constrain himself and not lose it and just beat the crap out of her. If Trump were up against Bernie Sanders, it would be no holds barred, but he canâ€™t do that with Hillary.

Michael Moore, famous leftwing nutbar, watched the debate and then tweeted this: And heâ€™s right. Trump won, because he spanked Hillary just enough to let her know her place, but not so hard he triggered the latent white knight in undecided viewers.

In the next debate, if she comes out swinging and lands a few blows on Trump, he can hit back, but not harder. If Hillaryâ€™s team is smart, they will have her in pink for the next debate. Ratchet the femininity up as high as possible. Although it honestly wonâ€™t matter, as long as Trump sticks to spanking and not pulverizing Hillary. Trump has a ton of kill shots, but just because you have them doesnâ€™t mean itâ€™s smart to use them. Not every shot has to kill. A good mauling will do the trick here, like a good spanking.

…..But TomatoBubble takes the Donald to task… 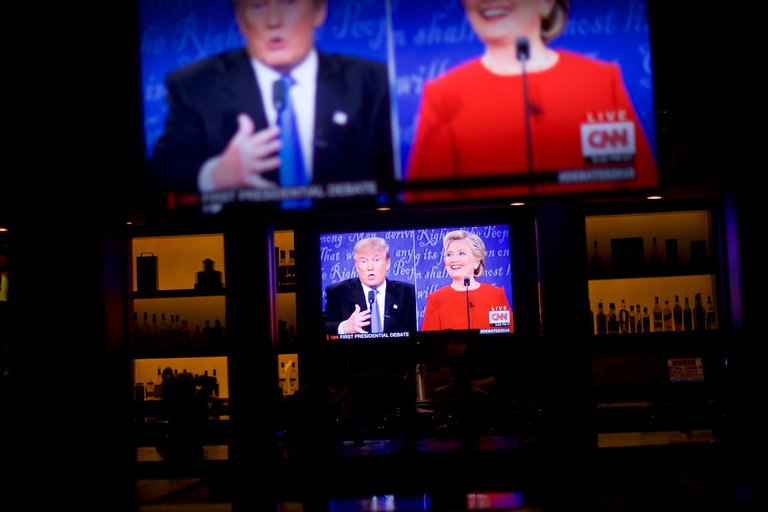 By MICHAEL BARBARO and MATT FLEGENHEIMER

Mrs. Clinton, with some help from the moderator, Lester Holt, found her footing during the second half and attacked Mr. Trump on his treatment of women.