Paul Joseph Watson has had it with Google/Youtube demonetization and shadow-bans.

…..Faceberg just deleted five of my posts on my 2011 video proving whites became a minority in the US back in 2005 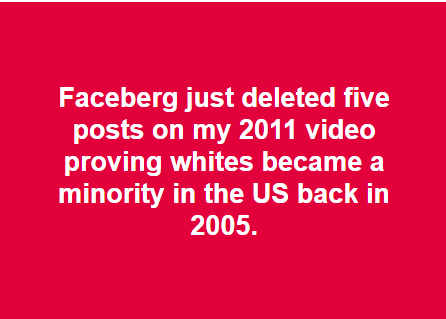 This is a very good article.Â But it is also delusional in its foundational facts. As I proved in a full-length video back in 2011, the country is already minority-white. Why? A forty-million US Census undercount of illegal aliens from Mexico…… Except for a few all-white pockets, always areas of dire poverty, Mexicans, Somalis and others are pouring now even into the smallest white towns. (This is also true of Germany. My American friend Roy lives in a small town in Hessen, which is now ten-percent “Syrian.”)

.
The white population is dropping now by about 250,000 a year as the WWII and Korean War generations die out, and now we Baby Boomers, 70 million of us, b. 1946-64, are also beginning to die.
.
Once we Boomers are gone, the country will be 80% black, brown and yellow, and extremely hostile. It will be exactly like South Africa.
. 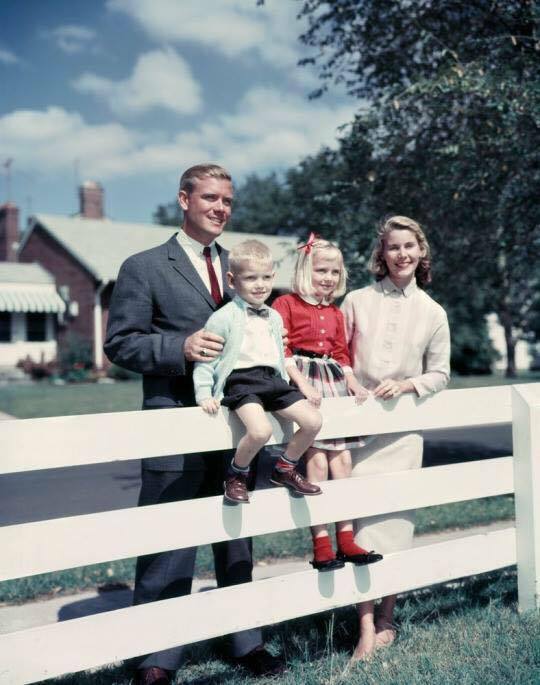 .
There is no more time to lose. And once Trump is removed by Deep-State THUG Robert Mueller or murdered by the JWO,
. 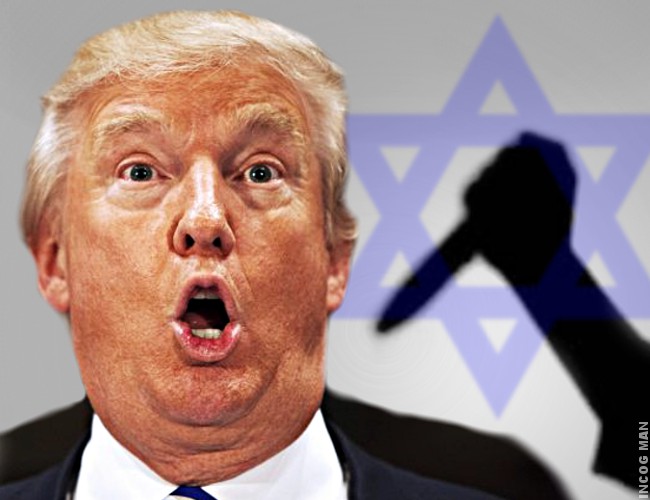 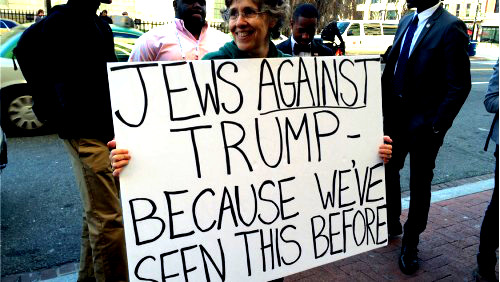 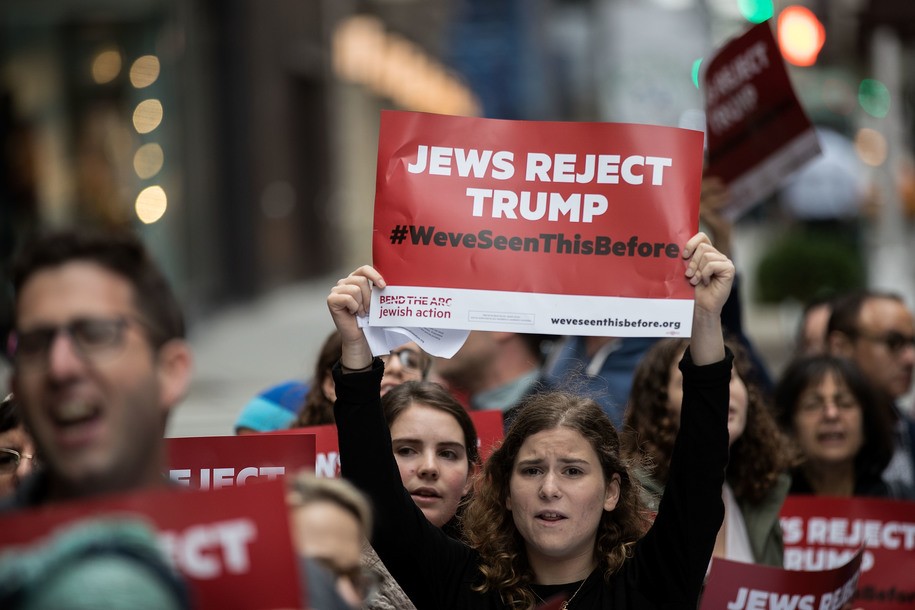 .
…..they will move on the First and Second Amendments under the arch-fiend and neo-con Mike Pence.
. 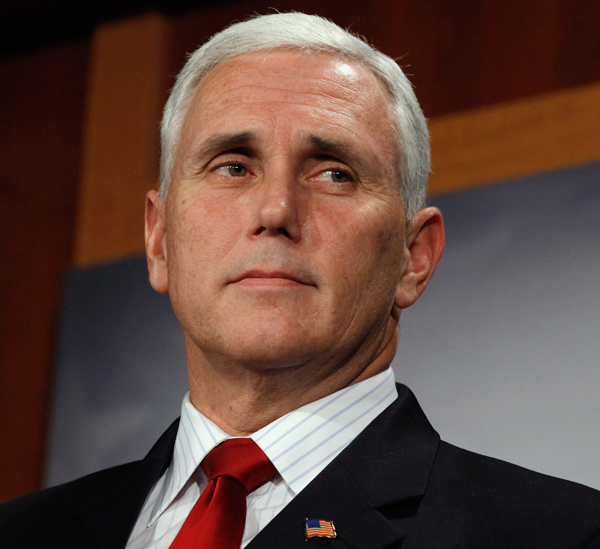 .
This is a big reason why the Jews took down TruTube and Sonnenrad.tv (which is now back up, however) and with them my video proving we whites are a minority now, and have been a MINORITY since 2005!!!!!!!
.
Whites will never relinquish their guns if it is hammered home to them that we are now already outnumbered (not to mention we are rapidly AGING)!
.
Every time they push amnesty for illegals, they lie that we are talking “11 million illegals.” BULL! It is FORTY MILLION!
.

Randall CareyÂ I almost NEVER see an extended family in the public setting where all members of the family are White. Seems like every couple I see these days is mixed race. There doesn’t seem to be any viable Aryan DNA basis for any kind of resurgence in Murika….Hitler had it right 80 years ago concerning this country. But we will be soon if we don’t speak up.
.
I replied:
.
I really do believe we whites have been a minority since 2005. Virginia Abernethy, professor emerita at Vanderbilt University (https://en.wikipedia.org/wiki/Virginia_Abernethy) edited for 12 years the most reputable scientific journal on demographics (population studies) in the world for the Springer Verlag publishing house in Germany .which owns 1,000 top scientific journals.
.
I heard her speak in Washington DC in 2006 and say there is a 40 mio Mexican undercount — on purpose — and whites are therefore a minority.
. 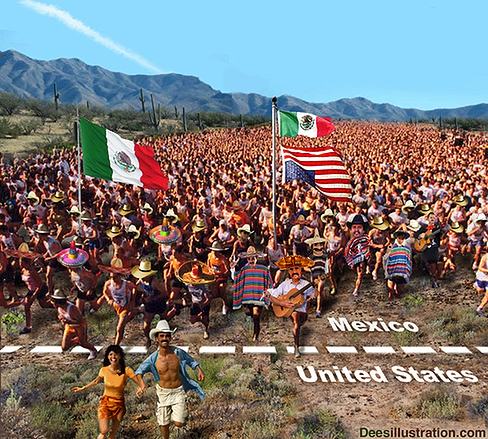 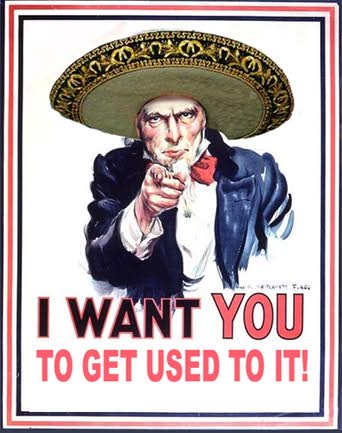 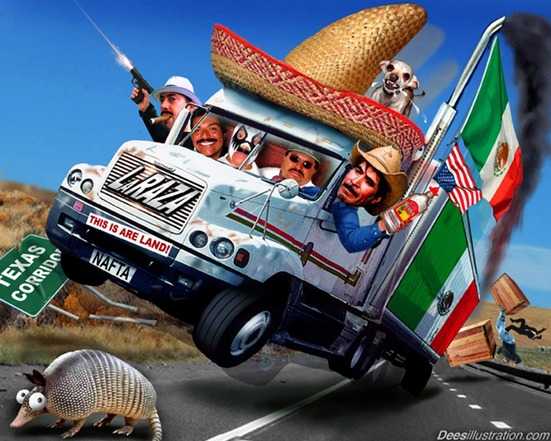 .
The real US population is around 400 million.
.
Look at the traffic congestion. Look at the soaring rents, all signs of an exploding US population, the “Browning of America.” Only the exurbs and rural areas are still white. I talked the other day to a female Navy vet who said her rent in Ohio was $400 three years ago, and now it is $600. It has gone up by 50% in three years. That is due to population pressure! Â Where I am, the population is FALLING, and therefore I am able to rent an entire house for $350!Â
. 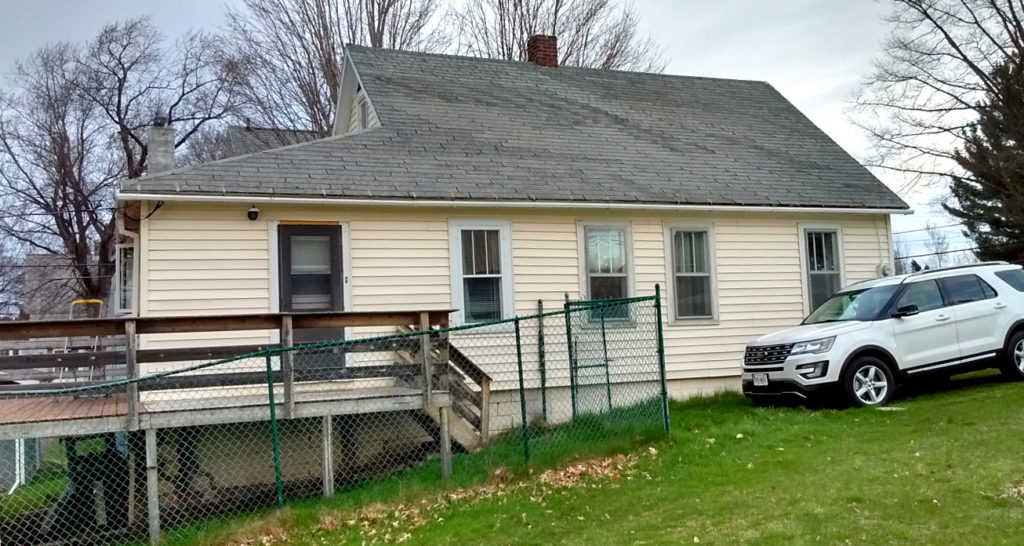 .
Population pressure is what drives up all housing prices!
If you won’t pay $600 for a small apartment, next to blacks and browns,someone else will!
.
Virginia Abernethy – Wikipedia
Virginia Abernethy (born 1934) is a Cuban-born American academic. She is professor emerita of psychiatry and anthropology at Vanderbilt University School of Medicine. She has published research on population demography and immigration. She ran for Vice President of the United States in 2012 alongsid…
EN.WIKIPEDIA.ORG
.
.

Sonnenrad belongs to a very close friend and ally, an IT specialist who is an Australian of pure German parentage and of German as well as Aussie citizenship. He is now an expat living in a fiercely antizionist country.

I am about to start uploading my key videos and others there, starting with my “American whites are a minority now” video.
.
I need your financial support, not “likes” on Faceberg, to keep Sonnenrad growing.
.
.

â€œYou pretend that you are patriots â€“ but youâ€™re anything but a patriot. You wanna talk about patriots, talk about Thomas Jefferson, George Washington â€“ who brought our country together. Think about the patriots today who are putting their lives in danger â€“ they are patriots â€“ you are not,â€Â he said.Â McAuliffe went on to stress that outsiders that had come to Virginia to promote hatred were less than welcome.

â€œOur message is plain and simple: Go home. You are not wanted in this great Commonwealth. Shame on you.â€

Referring to the US being a global melting pot,Â â€œthe nation of immigrantsâ€Â since it its early years, McAuliffe argued thatâ€œdiversity, the mosaic tile of immigrants is what makes us so special.â€

My message to you, Â Terry McCaulife, Â is that Jefferson and Washington were slave owners — Â and, especially Jefferson, overt white supremacists! (And so were Andrew Jackson and Ben Franklin, a nordicist who wrote a famous essay, “America, a Land of Opportunity” in 1750, saying America should take in only NORTHERN Europeans!)

Once my videos go back up on the reborn Sonnenrad.tv, you will see the proof! THE FOUNDING FATHERSÂ AND OTHER PRESIDENTS WERE WHITE NATIONALISTS. 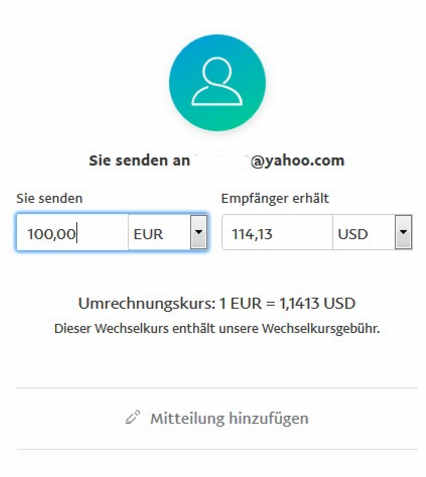 â€“11 August 2017 PayPal to mhuffstickler@outlook.com from M in Florida

â€“8 August 2017 PayPal to mhuffstickler@outlook.com from D in French Canada

â€“5 August 2017 a jar of Napoleon garlic cloves from M in Michigan (Does this mean I should remember to avoid invading Russia?)

â€“5 August Â 2017 from R in Michigan a wonderful little book by Eckhart Tolle,Â Practicing the Power of Now

UFOs, the Reich AFTER â€™45, and whites as colonists on this planet

Hitlerâ€™s love for the British people

If my site goes down, please tryÂ www.jdnmirror.comÂ orÂ https://www.europeanknightsproject.com/john-de-nugent/Â If my Facebook account is suspended or deleted, please go toÂ https://vk.com/johndenugent