……The Amerindians were a very primitive, often truly savage, dark-skinned kind of Mongolians, some mixed with (yes) semites Olive Ann Oatman (1837 – March 20, 1903)[3] was a woman from Illinois whose family was killed in 1851, when she was fourteen, in present-day Arizona by a Native American tribe, possibly the Tolkepayas (Western Yavapai); they captured and enslaved her and her sister and later sold them to the Mohave people.[4][5] After several years with the Mohave, during which her sister died of hunger, she returned to American society, five years after being carried off.

In subsequent years, the tale of Oatman came to be retold with dramatic license in the press, in her own “memoir” and speeches, novels, plays, movies and poetry. The story resonated in the media of the time and long afterward, partly owing to the prominent blue tattooing of Oatman’s face by the Mohave. Much of what actually occurred to her during her time with the Native Americans remains unknown.[6]:146-151

Born into the family of Roys and Mary Ann Oatman, Olive Oatman was one of seven siblings. She grew up in the Mormon religion.

In 1850, the Oatman family joined a wagon train led by James C. Brewster, a member of The Church of Jesus Christ of Latter-day Saints (LDS Church), whose attacks on, and disagreements with, the church leadership in Salt Lake City, Utah, had caused him to break with the followers of Brigham Young in Utah and lead his followers — Brewsterites — to California, which he claimed was the “intended place of gathering” for the Mormons.[7]

The Brewsterite emigrants, numbering between 85 and 93, left Independence, Missouri on August 5, 1850. Dissension caused the group to split near Santa Fe in New Mexico Territory with Brewster following the northern route. Roys Oatman and several other families chose the southern route via Socorro and Tucson. Near Socorro, Roys Oatman assumed command of the party. They reached New Mexico Territory early in 1851 only to find the country and climate wholly unsuited to their purpose. The other wagons gradually abandoned the goal of reaching the mouth of the Colorado River.[7]

The party had reached Maricopa Wells, when they were told that not only was the stretch of trail ahead barren and dangerous, but that the Native Americans ahead were very hostile and that they would risk their lives if they proceeded further. The other families resolved to stay. The Oatman family, eventually traveling alone, was nearly annihilated in what became known as the “Oatman Massacre” on the banks of the Gila River about 80–90 miles east of Yuma, in what is now Arizona.[8]

Roys and Mary Oatman had seven children at this time, ranging in age from 17 to one year. On their fourth day out, they were approached by a group of Native Americans, asking for tobacco and food. At some point during the encounter, the Oatman family was attacked by the group, and all were killed except Lorenzo, age 15 (who was clubbed and left for dead), Olive, age 14, and Mary Ann, age 7.[8]

Lorenzo awoke to find his parents and family dead, but no sign of Mary Ann and Olive. He eventually reached a settlement where he was treated. Three days later, Lorenzo, who had rejoined the emigrant train, found the bodies of his slain family; “we buried the bodies of father, mother and babe in one common grave.”[9] The men had no way of digging proper graves in the volcanic rocky soil, so they gathered the bodies together and formed a cairn over them. It has been said the remains were reburied several times and finally moved to the river for reinterment by early Arizona colonizer Charles Poston.[10] 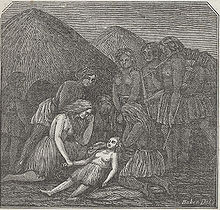 Olive (left) and Mary Oatman, Captivity of the Oatman Girls, 1857

Once the attack was complete, the Native Americans took some of the Oatman family’s belongings along with the Oatman girls. Although Olive Oatman later identified her captors as Tonto Apaches,[11][12] they were probably Tolkepayas (Western Yavapais)[13]:85 living in a village 60–100 miles from the site of the attack. After arriving at the village, the girls were initially treated in a way that appeared threatening, and Oatman later said she thought they would be killed. However, the girls were used as slaves, to forage for food, lug water and firewood, and other menial tasks; they were frequently beaten and mistreated.

After a year, a group of Mohave Indians visited the village and traded two horses, vegetables, blankets, and other trinkets for the captive girls, after which the girls walked for days to a Mohave village at the confluence of the Gila and Colorado rivers (in what today is Yuma, Arizona). They were immediately taken in by the family of a tribal leader (kohot) whose non-Mohave name was Espianola or Espanesay. The Mohave tribe was more prosperous than the group that had held the girls captive, and both Espanesay’s wife Aespaneo and daughter Topeka took an interest in the Oatman girls’ welfare. Oatman expressed her deep affection for these two women numerous times over the years after her captivity.[13]:93

Aespaneo arranged for the Oatman girls to be given plots of land to farm. Whether the Oatman girls were truly adopted into that family and the Mohave people is unknown. Oatman later claimed that she and Mary Ann were captives of the Mohave and that she feared to leave. She did not attempt to contact a large group of whites that visited the Mohaves during her period with them,[13]:102 and years later she went to meet with a Mohave leader, Irataba, in New York City and spoke with him of old times.[13]:176-177 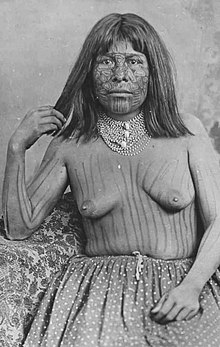 Both Oatman girls were tattooed on their chins and arms[14][15] in keeping with the tribal custom for those who were tribal members. Oatman later claimed (in Stratton’s book and in her lectures) that she was tattooed to mark her as a slave of the Mohaves, but this is inconsistent with the Mohave tradition in which such marks were given only to their own people to ensure both that they would enter the land of the dead, and be recognized as Mohaves by their ancestors.[6]:78

During a drought in the region (probably in 1855, according to climate records),[13]:105 the tribe experienced a dire shortage of food supplies and Mary Ann died of starvation, at the age of ten or eleven, along with many Mohaves.

Oatman later spoke with fondness of the Mohaves, whose treatment of her was superior to the treatment she had received when first captured. She most likely considered herself assimilated: she was given a clan name, Oach, and a nickname, Spantsa, a Mohave word having to do with unquenchable lust.[6]:73-74, [16] She remained with the Mohave, choosing not to reveal herself to white railroad surveyors who spent nearly a week in the Mohave Valley trading and socializing with the tribe in February of 1854.[6]:88 Because she did not know that Lorenzo had survived the massacre, she believed she had no immediate family, and the Mohave raised her as their own.

When Oatman was 19 years old, Francisco, a Yuma Indian messenger arrived at the village with a message from the authorities at Fort Yuma. Rumors suggested that a white girl was living with the Mohaves and the post commander requested her return (or to know the reason why she did not choose to return). The Mohaves initially sequestered Oatman and resisted the request. At first they denied that Oatman was even white; others over the course of negotiations expressed their affection for Oatman, others their fear of reprisal from whites. Francisco, meanwhile, withdrew to the homes of other nearby Mohaves; shortly thereafter he made a second fervent attempt to persuade the Mohaves to part with Oatman. Trade items were included this time, including blankets and a white horse, and he passed on threats that the whites would destroy the Mohaves if they did not release Oatman.

After some discussion, in which Oatman was this time included, the Mohaves decided to accept these terms, and she was escorted to Fort Yuma in a 20-day journey. Topeka (the daughter of Espianola/Espanesay and Aespaneo) went on the journey with Oatman. Before entering the fort, Oatman was given Western clothing lent by the wife of an army officer, as she was clad in a traditional Mohave skirt with no covering above her waist. Inside the fort, Oatman was surrounded by cheering people.[6]:111

Oatman’s childhood friend Susan Thompson, whom she befriended again at this time, stated many years later that she believed Oatman was “grieving” upon her return, because she had been married to a Mohave and given birth to two boys.[13]:152, [17]

Oatman herself, however, denied rumors during her lifetime that she had been either married to a Mohave or was ever raped or sexually mistreated by the Yavapai or Mohave. In Stratton’s book she declared that “to the honor of these savages let it be said, they never offered the least unchaste abuse to me”. Her nickname, Spantsa (“rotten womb”), however, implied that she was sexually active.[6]:73-74[18]

Within a few days of her arrival at the fort, Oatman discovered her brother Lorenzo was alive and had been looking for her and her sister. Their meeting made headline news across the West.

In 1857, a pastor named Royal B. Stratton wrote a book about the Oatman girls titled Life Among the Indians. The book sold 30,000 copies, a best-seller for that era.[20] Royalties from the book paid for Oatman and her brother Lorenzo’s college education at the University of the Pacific.[21] She went on the lecture circuit to help promote the book.[1]

In November 1865, Oatman married cattleman John B. Fairchild.[22] Though it was rumored that she died in an asylum in New York in 1877, she actually went to live with Fairchild in Sherman, Texas, where they adopted a baby girl, Mamie.[23] Stratton died in Worcester Lunatic Hospital, Jan. 24, 1875.[24]

The town of Oatman, Arizona, a ghost town renewed by tourists from a nearby gambling town, is named in her honor.[26]

In 1965, the actress Shary Marshall played Oatman, with Tim McIntire as her brother, Lorenzo, and Ronald W. Reagan as Lieutenant Colonel Burke, in “The Lawless Have Laws” episode of the syndicated western series Death Valley Days, hosted by Reagan near the end of his acting career. In the storyline, Burke leads Lorenz in a search for his sister, whom he has not seen in five years since an Indian raid on their family.[27][6]:201

The character of Eva portrayed by Robin McLeavy in the AMC television series Hell on Wheels is very loosely based on Olive Oatman, but outside of being captured by a group of Indians and bearing the distinctive blue chin tattoo, and being raised Mormon there are very few similarities between the character of Eva and the actual life of Olive Oatman.[28]

Novelist Elmore Leonard based a short story, The Tonto Woman, on a white captive woman who was tattooed in the manner of Oatman.[6]:203

…….Truth about the Amerindians Massey Harbison, white frontierswoman who with her baby survived the Indians and their horrors

……Solutreans were the first Americans

…..Yours truly on the Discovery Channel

……Did you learn from me today?