To Heinlein’s surprise,[68] Starship Troopers won the Hugo Award for Best Novel in 1960.[69] By 1980, twenty years after its release, it had been translated into eleven languages and was still selling strongly. However, Heinlein complained that, despite this success, almost all the mail he received about it was negative and he only heard about it “when someone wants to chew me out.”[68]

The novel is also highly controversial. Heinlein scholar James Gifford called it one of the most controversial science fiction books ever published.[4][3] The controversy surrounded its “overzealous” praise of the military and approval of violence, to the extent that it has frequently been described as fascist, and its implication that militarism is superior to traditional democracy.[3][70]

It had the effect of giving Heinlein a reputation as a “fanatical warmongering fascist”.[5] A two-year debate occurred in the Proceedings of the Institute for Twenty-First Century Studies sparked by a comparison between a quote in Starship Troopers that “the noblest fate that a man can endure is to place his own mortal body between his loved home and war’s desolation”[71] and the anti-war poem “Dulce et Decorum Est” by Wilfred Owen.[72] 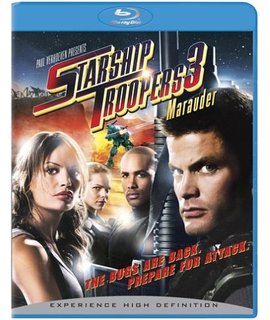 STARSHIP TROOPERS Turns 20: Does This Film (and book) Lay the Foundation for a Post-Democratic West? Yes.

“Liberal democracy,” frets the Main Stream Media, is dying, and far-left journalists are demanding conservatives be good little cucks and help them contain the “far right” [Why liberal democracy only dies when conservatives help, by Matt O’Brien, Washington Post, May 17, 2017]. Of course, by “democracy” journalists mean government by unelected judges, shadowy plutocrats and increasingly overt commissars willing to ban speech and organizations they don’t like, and continuing mass immigration no matter who wins the elections. But whatever you want to call it, this System which governs the West is slowly committing suicide, as the managerial elite replaces the European populations who created self-government with Third World peoples incapable of maintaining it. 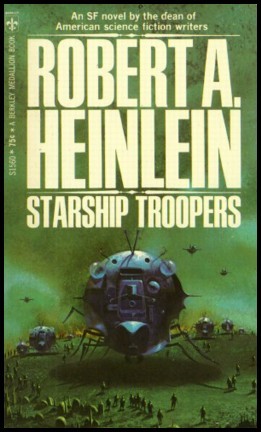 One of the few films which imagined a post-democratic age was 1997’s Starship Troopers, one of the most misunderstood films in history.

The source material, Robert Heinlen’s 1959 masterpiece, is a must read. [6 Reasons Why ‘Starship Troopers’ Is the New ‘The Art of War’, by Joe Pappalardo, Popular Mechanics, February 5, 2015]

I’d contend the film is too, as it addresses the fundamental problems of our age.

During one early scene, a teacher (“Jean Rasczak”) lectures on the collapse of the egalitarian era.

Jean Rasczak: This year in history, we talked about the failure of democracy, how the social scientists of the 21st Century brought our world to the brink of chaos. We talked about the veterans, how they took control and imposed the stability that has lasted for generations since. We talked about the rights and privileges between those who served in the armed forces and those who haven’t, therefore called citizens and civilians. [to a student] You. Why are only citizens allowed to vote?

Student: It’s a reward. Something the federation gives you for doing federal service.

Jean Rasczak: No. Something given has no basis in value. When you vote, you are exercising political authority, you’re using force. And force, my friends, is violence. The supreme authority from which all other authorities are derived.

Years later, I had a conversation with VDARE.com’s  James Kirkpatrick about this scene and he admitted, “I’d never thought of an individual voting was the ultimate expression of violence, since the state has the monopoly on violence, until I saw that movie.”

Journalists and critics, commissars that they are, hated the film at the time. It was blasted as “coming directly out of the Nazi imagination, and is set in the Nazi universe.” [Goosestepping at the Movies, by Stephen Hunter, Washington Post,  November 11, 1997] 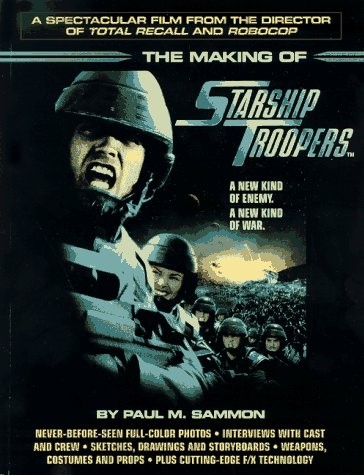 Of course, it was meant as a parody of the right wing. Director Paul Verhoeven  had grown up during the Nazi occupation of the Netherlands. In an interview with Paul M. Sammon for The Making of Starship Troopers, he commented:

“So I think the essence of my interest in this so-called fascism of Heinlein’s, or pseudo-fascism, the real reason I wanted to transfer that to film was that at this moment there are voices in the United States that would actually embrace this form of policy. Which is another reason I wanted to do this film. To carry over the fascist framework from the book to the movie. It’s a metaphor, you see—for that part of the American society which would like to have something like the government portrayed in Starship Troopers in power in the United States today.

It would also be interesting. I felt, to have the film of Starship Troopers make this statement: “This quasi-fascist society we’re showing you works. On a certain level, anyway.” (p. 138) 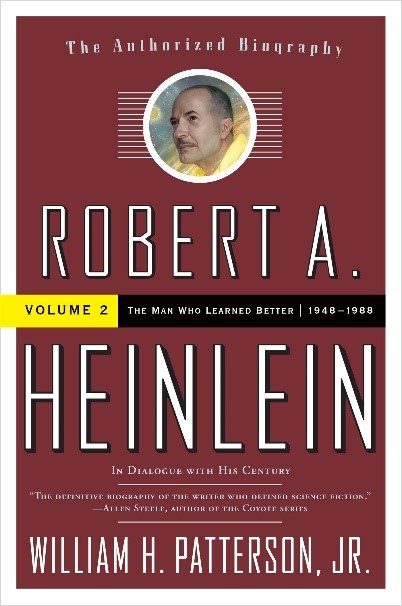 But as satire, the film failed. The source material was simply too good. And Robert Heinlen’s critiques of liberal democracy were meant to be taken seriously.

Heinlein said of the book:

The central theme is expanded in many ways and many sub-propositions consistent with or corollary to the main one are show: (a) that nothing worth having is ever free; it must be paid for; (b) that authority always carries with it responsibility, even if a man tries to refuse it; (c) that “natural right” are not God-given but must be earned; (f) that a man’s noblest act is to die for his fellow man, that such death is not suicidal, not wasted, but is the highest and most human form of survival behavior. [The Authorized Biography, Robert Heinlein: Volume 2, by William Patterson, Jr., p. 181]

This philosophy is explained in the “History and Moral Philosophy” classes in the book, where young adults learn from citizens (veterans who earned the right to vote through service) about the difference between citizens and civilians. Many believe Heinlein placed himself in the novel as one of these teachers.  When the protagonist ends up joining the Mobile Infantry, he gets an even more detailed explanation of the ideological justification behind the system he serves.

“Under our system every voter and officeholder is a man who has demonstrated through voluntary and difficult service that he places the welfare of the group ahead of personal advantage.” [Ch. XII, p.144]

“We ensure that all who wield [sovereign franchise] accept the ultimate in social responsibility—we require each person who wishes to exert control over the state to wager his own life—and lose it, if need be—to save the life of the state.” [Ch. XII, p.146]

Agree or disagree, this wasn’t some flippant philosophy. And, critical in our race-obsessed age, race was not part of the book. The protagonist in the book spoke Tagalog and was presumably Filipino.

The “satirical” film turned “Juan Rico” into blue-eyed, blonde haired Johnny Rico [photo], presumably so the audience would know The Federation was a Very Bad Thing. 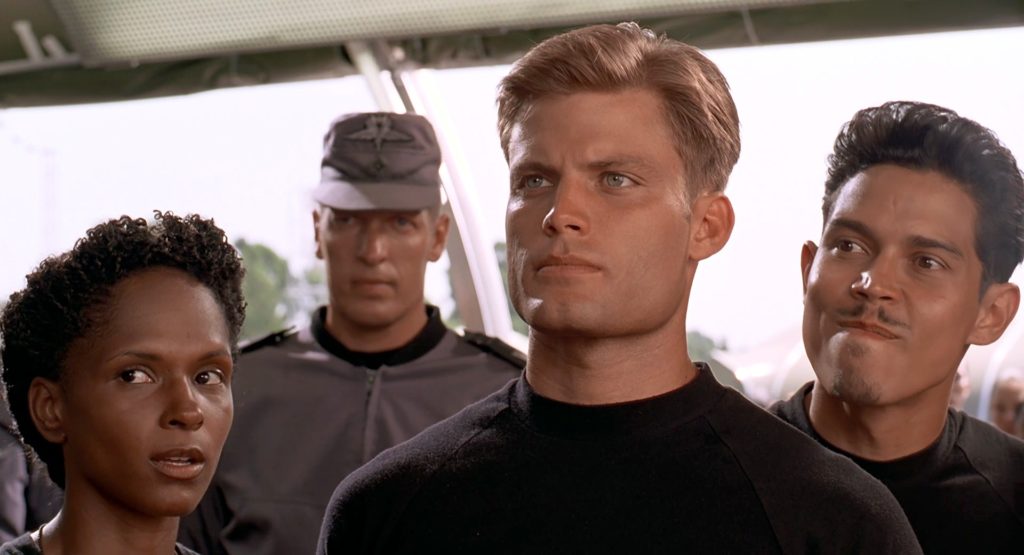 And as science fiction historian Paul Sammon sneers, the film is nothing more than “a right-wing group of empty-headed beautiful people doing exactly what they’re told to do.”

But this is obviously untrue. Even in the film, every individual has the choice to about whether to apply for citizenship. If they don’t, they are left alone, and enjoy far more freedom than citizens. If anything, citizens try to dissuade civilians from joining, as shown in the hash “moral philosophy” lectures mandated in schools.

The clumsy and hopelessly liberal Verhoeven, whose purpose in life is to apologize for existing, failed to make effective satire because the core message of the source material is too compelling, subversive and attractive. This is also why a rumored “faithful” adaptation of the book is impossible in our present era [Why ‘Starship Troopers’ May Be Too Controversial to Adapt Faithfully, by Graeme McMillan, Hollywood Reporter, November 3, 2016].

Besides, even when liberals are supposedly outraged by the ideas in the book and film, through their actions they confess them to be true. Voting is about force. And in a multicultural, multiracial society, it’s about one tribe exercising force against another.

Leftists know this. An article recently published at Huffington Post asked, “Could it be time to deny white men the franchise?” It turned out to be satirical (and written by an Afrikaner), but the editor of the site initially defended it deadpan. She said it was “pretty standard for feminist theory” and that there was “nothing in the article that should have shocked or surprised anybody” [HuffPost SA editor Verashni Pillay resigns after damning ombud ruling, HeraldLive.com.za, April 23, 2017].

This is also what justifies mass Third World immigration. Kris Kobach, when speaking on voter fraud, observed, “Every time there is a fraudulent vote, it effectively cancels out a legitimately cast vote by a U.S. citizen.” [Exclusive: Federal Data can resolve vote fraud debate, says vice chairman of Donald Trump’s election integrity commission, by Neil Munro, Breitbart, May 11, 2017].

But at a deeper, more fundamental level, every Third World immigrant brought in also cancels out a legitimately cast vote by an actual American. After all, achieving this dispossession is the main reason why the Left is so committed to bringing these people in in the first place.

When Donald Trump won, liberals took solace in noting the demographic trends were turning on white America, and they’d soon be overwhelmed by the rising tide of color, largely because of mass immigration. [Trump’s Vanishing Base: Blue-collar whites put him over the top. Here’s why it won’t happen again., by Bob Moser, New Republic, November 21, 2016]

The core message of Starship Troopers is more true than ever. Voting is an exercise of force. Giving such power to those who have no stake in and no ability to contribute to the success of society is recipe for collapse. And as the film turns 20, don’t be surprised if more and more disillusioned young people see past the “satire,” adopt the ethos of the movie and go on to read the book. After all, the alternative to the star-spanning Federation is a global Third World where helpless degenerates paw through the ruins of Port-au-Prince, Detroit, Paris, and Johannesburg, incapable of even articulating what went wrong.

If you want an alternative to that, well, service guarantees citizenship.

Paul Kersey[Email him] is the author of the blog SBPDL, and has published the books SBPDL Year One, Hollywood in Blackface and Escape From Detroit, Opiate of America: College Football in Black and White and Second City Confidential: The Black Experience in Chicagoland. His latest book is The Tragic City: Birmingham 1963-2013.