The flag-stomping BLM Thomas DiMassimo got a mere $250 fine in July for assaulting Donald Trump (see definition of assault below) in March in Ohio. The demonization of Trump, often called Drumpf for his German forbears, is extraordinary in my lifetime. I got this email below, thanks to patriot Tom Mysiewicz .


Avaaz is a 44-million-person global campaign network that works to ensure that the views and values of the world’s people shape global decision-making. (“Avaaz” means “voice” or “song” in many languages.) Avaaz members live in every nation of the world; our team is spread across 18 countries on 6 continents and operates in 17 languages. Learn about some of Avaaz’s biggest campaigns here, or follow us on Facebook or Twitter.

You became a member of the Avaaz movement and started receiving these emails when you signed “FIFA: Red Card for the Israeli Occupation” on 2016-07-01 using the email address polishvictims@nym.hush.com.
To ensure that Avaaz messages reach your inbox, please add avaaz@avaaz.org to your address book. To change your email address, language settings, or other personal information, contact us, or simply go here to unsubscribe.

The Hungarian Jew George Soros is the founder and moneybags behind MoveOn.org:Â  http://www.washingtontimes.com/news/2016/mar/13/moveonorg-raising-funds-from-trump-protests-warns-/ Outrageous — he was indicted only for “illegally entering a restricted area” and got a $250 misdemeanor fine! Thomas DiMassimo is one of that minority of Sicilians who looks part-black (with the wide nose and weak nose bridge) or Arabic due to the violent muslim conquest a thousand years ago of Sicily and the usual rape of “infidel” white women. A tall, blond guy with a German name like Trump probably sets Mr SJW off bigtime. 😉

A leftie here in my town who knows and loathes me sneered at me that he had brown eyes and therefore he was (supposedly in my eyes) “one of the mud people.”[sic!]

I never, EVER said that. My own mother had beautiful, warm brown eyes. But the Jews absolutely do preach in Hollywood films that the SS was all about tall, blond-and-blue-eyed…… And via the classrooms, the Jews lie “had Hitler won the war, he would have exterminated anyone who is not blond-haired and blue-eyed.”

Both a Nebraska supporter and a supporter over in Finland told me they heard their teachers actually teach that lie.

I guess Hitler would have gassed Himmler and Hess then. 😉 Amazing (or not) that DiMassimo was quickly released on bail for “entering a restricted area” — subject to ten years’ imprisonment for any person protected by the Secret Service (https://www.law.cornell.edu/uscode/text/18/1752) and was NOT even charged with assault!

Probably because he is a great American patriot…. Definition of assault (as in the first part of “assault and battery,” with the latter meaning actual hitting):

An assault is carried out by a threat of bodily harm coupled with an apparent, present ability to cause the harm. […]

Generally, the essential elements of assault consist of an act intended to cause an apprehension of harmful or offensive contact […]

The act required for an assault must be overt. Although words alone are insufficient, they might create an assault when coupled with some action that indicates the ability to carry out the threat. [….] There must be a reasonable fear of injury. The usual test applied is whether the act would induce such apprehension in the mind of a reasonable person. The status of the victim is taken into account. A threat made to a child might be sufficient to constitute an assault, while an identical threat made to an adult might not.

Virtually all jurisdictions agree that the victim must be aware of the danger.Â 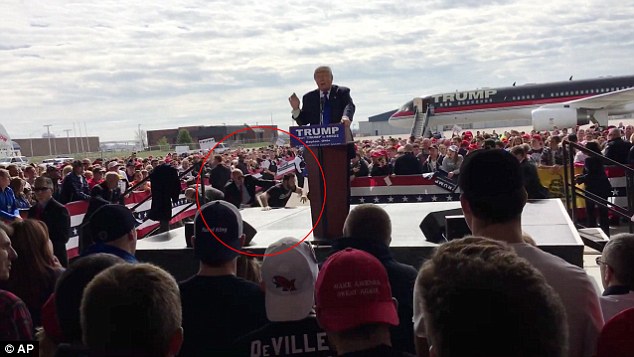 Now just imagine if you or I, as a white nationalist, had 1) assaulted Obama by rushing full-speed at him during a speech, and 2) “entering the restricted area of a person protected by the Secret Service”? A $250 fine?

Secret Service glares at crowd during Obama speech where he imitated a rapper — When, white men, will you stop selling out your race and nation for a paycheck? …..DiMassimo had violated bond, but was given only house arrest by unmarried white, female judge

No mention anywhere of a husband and kids…. hmm. Ms. Ovington seemingly cannot afford a family and kids — her pay as a US Magistrate Judge is only $185,000 a year: http://www.ncsc.org/~/media/Files/PDF/Jobs_Court%20Community/USMAGJUD_CA.ashx