I think this show went very well — and when people see the visual elements of this from me very soon, they absolutely will be blown away.

“Global warming is REAL”……My teleprompter has just informed me it is….Let there be no mistake…..

But in white America, a different story is told……..

On MY teleprompter, Mr. Obongo (otherwise known as the east and west windows in my office), this is what I see 😉 Let there be no mistake…..

Comrade Nelson1805 sent me this:

* * *
John, the climate is one of our best allies! (weather being the most-discussed topic on the planet)…

Here are two essential documentaries on the Climate Swindle:

First: Global Warming or Global Governance
http://video.google.com/videoplay?docid=4860344067427439443&ei=qmJ6S6ndHoyM2ALY8vTWBw&q=global+warming+or+global+governance#
(This documentary is a drawing-together of many types of evidence and then exposes the NWO’s evil intentions behind the climate-hoax.)

Thanks, Nelson. Channel Four in Britain did the “Ice Age Columbus” DVD, which has been so incredibly useful in understanding the heroism of the first Solutreans in 20,000 BC, our intrepid, never-say-die ancestors.

Then, just as right now, the issue is not global warming, but global freezing. (Despite great gusts of Obama hot air….) And OUR race will survive the freeze better than any other.

We are the Ice Men. We were formed as a race by the ice.

The movie Jeremiah Johnson shows a white man (played by Robert Redford) who wreaks havoc in the snowy Rockies on his racial enemies.  It is not perfect (it was done by ju director Sidney Pollack!), but it was sure good enough for Dr. William Pierce to show it in 1984 to me and a select group. http://en.wikipedia.org/wiki/Jeremiah_Johnson

A mountain man who wishes to live the life of a hermit becomes the unwilling object of a long vendetta by Indians when he proves to be the match of their warriors in one-to-one combat on the early frontier.

Here we see an older Jeremiah Johnson in action:

Jeremiah finds “Hatchet Jack,” frozen to death after a bear he had shot wounded and incapacitated him. He has left a “will” saying “any white man” who finds him there can have his rifle — a monstrous 50-caliber Hawken.

NOw HERE we see an older and very real Jeremiah Johnson in action on a bus 😉 :

A winter scene in Solutré……..We survived TWENTY THOUSAND YEARS OF ICE. (No sweat ;-)) 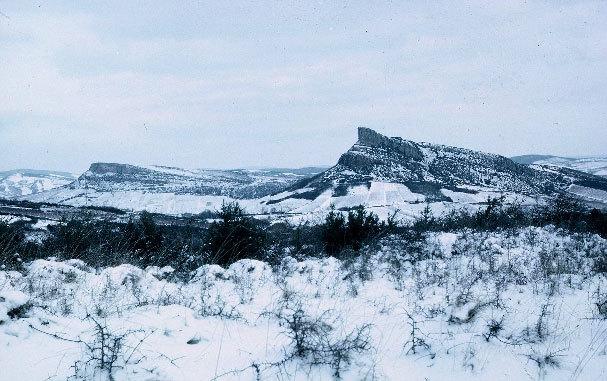