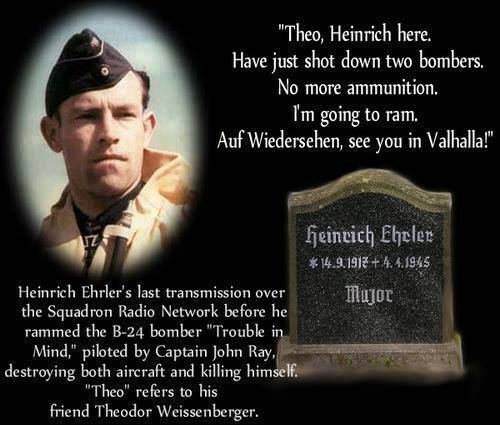 Heinrich Ehrler (14 September 1917 â€“ 4 April 1945) was a German Luftwaffe military aviator during World War II, a fighter ace credited with 208 enemy aircraft shot down in over 400 combat missions. The majority of his victories were claimed over the Eastern Front, with nine claims over the Western Front which included eight in the Messerschmitt Me 262 jet fighter.

Born in Oberbalbach, Ehrler grew up in the Weimar Republic andThird Reich as one of 12 children. He joined the military service in the Wehrmacht in 1935, initially service with the artillery and anti-aircraft artillery. He participated in the Spanish Civil War and following the outbreak of World War II transferred to the Jagdwaffe(fighter force). Following flight training, he was posted to the 4.Staffel of Jagdgeschwader 77 (JG 77â€”77th Fighter Wing), which was later redesignated to 4. Staffel of Jagdgeschwader 5 (JG 5â€”5th Fighter Wing).

Scapegoated for the loss of the German battleship Tirpitz, Ehrler – who had been nominated for the Knight’s Cross of the Iron Cross with Oak Leaves and Swords prior to the disaster – was court-martialled, stripped of his command and sentenced to three years and two months Festungshaft (honorable imprisonment).[1]Ehrler’s sentence was later commuted and his loss of rank rescinded, and in February 1945 he was transferred toJagdgeschwader 7. According to his fellow pilots, Ehrler thereafter flew in the increasingly desperate air battles without the purpose and dedication that had made him one of the Luftwaffe’s most successful aces.[2] On 4 April 1945, he shot down two Allied bombers for his final two victories, before destroying a third byramming with his damaged aircraft after having run out of ammunition.[2]

Ehrler was born on 14 September 1917 in Oberbalbach, present-day it is part of Lauda-KÃ¶nigshofen, in the district ofTauberbischofsheim of the Grand Duchy of Baden. He was one of eight children of a laborer. When his mother died, his father married again. The second marriage added four further children to the family.[3]

Following a vocational education as a butcher, Ehrler joined the military service of the Wehrmacht on 29 October 1935. He initially served with the 7th battery of Artillerie-Regiment 25 (25th artillery regiment) in Ludwigsburg. He then transferred to the Luftwaffe where he served with Flak-Regiment 8 (8th anti-aircraft artillery regiment) from 7 April to 1 November 1936.[3]

World War II in Europe began on Friday 1 September 1939 when German forces invaded Poland. Ehrler, who was still serving with the anti-aircraft artillery, requested transfer to the fighter force of the Luftwaffe on 3 January 1940.[Note 1]His transfer request was accepted and he underwent flight training from 1 February to 4 November 1940. During this training period he was promoted to Feldwebel (staff sergeant) on 1 July and to Leutnant (second lieutenant) on 1 January 1941.[3]

JG 77 supported X. Fliegerkorps (under Luftflotte 5) in operations against Britain from bases in Norway, often providing fighter cover for Stuka attacks against British shipping. JG 77 was restructured as JG 5 Eismeer in January 1942.[5] JG 5 operated from bases in northern Norway and Finland, and they mostly engaged Russian aircraft, but were also given the task of intercepting British raids on Norway.

Ehrler claimed his second victory on 19 February 1942. He led a patrol of three aircraft of 4. Staffel and shot down a Polikarpov I-18. The Allied Convoy PQ 16, consisting of 35 merchant vessels and protected by 15 escort ships, was sighted by German reconnaissance aircraft on 16 May 1942. Over the following days, the convoy came under multiple attacks fromKampfgeschwader 30 (KG 30â€”30th Bomber Wing) and Kampfgeschwader 26(KG 26â€”26th Bomber Wing). On 30 May 1942, JGÂ 5 engaged in combat as well.[3] In aerial combat, JGÂ 5 claimed 43 fighter aircraft and 7 bombers shot down. Ehrler was among the most successful pilots that day.[6]

He was promoted to Leutnant and made StaffelkapitÃ¤n (squadron leader) in 6./Jagdgeschwader 5 (JG 5â€”5th Fighter Wing) after his 11th victory on 20 July.[Note 3] On 4 September, he was awarded the Knight’s Cross of the Iron Cross (Ritterkreuz des Eisernen Kreuzes) for 64 aerial victories. The presentation was made by the FliegerfÃ¼hrer Nord Oberst Alexander Holle. By 1 June 1943 he was promoted toHauptmann and appointed Gruppenkommandeur (Group Commander) for II./JG 5. During this period he was also awarded the Eichenlaub (Oak Leaves) to his Ritterkreuz. On 25 May 1944, he achieved nine victories in one day, bringing his tally up to 155. On 1 August, he was appointed to Geschwaderkommodore (Wing Commander) of JG 5 and at the same time was promoted to Major.

On 12 November 1944 the RAF launched its final raid against the battleship Tirpitz. Avro Lancaster bombers from 617and 9 squadrons were sent to HÃ¥kÃ¸ya a little west of TromsÃ¸ where the Tirpitz was based.

Ehrler was in command of 9./JG 5 at Fliegerhorst Bardufoss with 12 operational Focke-Wulf Fw 190 A-3s. The Staffelwas at 10 minutes’ readiness status due to the continuing pressure of British bombers in the TromsÃ¸ area. Ehrler’s unit was scrambled airborne, but he received conflicting messages as to the enemy aircraft location and course. Some reports claimed Alta was the target area, others indicated BodÃ¸.[7] When it finally became clear that the target was theTirpitz, it was too late for the fighters to intercept, and the Tirpitz was destroyed with much loss of life.

After this unsuccessful action, Ehrler faced a court martial hearing in Oslo on the grounds of his not having understood the seriousness of the attack. Evidence was presented that supported the contention that his unit had failed to respond to requests from the Kriegsmarine for help. Ehrler was found guilty. He was relieved of command, demoted and sentenced to three years in prison. Ehrler had been recommended for the Knight’s Cross with Oak Leaves and Swords prior to the disaster, but the award was not approved.[8]

Walter Schuck, one of his junior officers, appealed to Reichskommissar Josef Terboven.[9] On 12 January 1945 Terboven hand-delivered Schuck’s affidavit in support of Ehrler to Reichsmarschall Hermann GÃ¶ring, Commander-in-Chief of the Luftwaffe. Further investigations and testimonies indicated that the aircrews did not know that the Tirpitzhad been moved to the new location at HÃ¥kÃ¸ya a couple of weeks earlier, and Heinrich Ehrler was a convenient scapegoat for the failure to protect Tirpitz.[10] The investigation concluded the reason for the failure was poor communication between the Kriegsmarine and the Luftwaffe.[11] Ehrler was exonerated. Shortly afterward, the FÃ¼hrer HQ announced Ehrler’s release and return to front-line service, where he would have the chance to “rehabilitate himself.”[9] Ehrler’s sentence was commuted and his loss of rank rescinded. He was reassigned to an Me 262 fighter squadron in Germany.[12]

A Me 262 of JG 7 similar to those flown by Ehrler on display at theEvergreen Aviation & Space Museum.

Ehrler was transferred to Jagdgeschwader 7 (JG 7â€”7th Fighter Wing) on 27 February 1945. JG 7 was equipped with the Messerschmitt Me 262 jet fighter, and was given the task of Reichsverteidigung (Defense of the Reich). During the next five weeks, Ehrler scored a further 8 kills,[Note 4] bringing his tally to 206.

On the morning of 4 April 1945, Maj Ehrler flew his last sortie and achieved the last three of his 208 recorded victories. Flying out of JG 7’s airfield at Brandenburg-Briest, accompanied by his wingman, was in the skies 50 kilometers (31 miles) east of Hamburg when B-24 Liberators from the 448th Bombardment Group began forming their bombing run of Parchim. Ehrler attacked the lead 714th Bombardment Squadron, downing two B-24 Liberator bombers: Lt J. J. Shafter’s “Miss-B-Hav’n,” (B-24J-1-FO 42-95620) and Lt Mains’ “Red Bow” (B-24M-10-FO 44-50838). At the time of the attack, two P-51 Mustangs were pursuing Major Ehrler, and he was being fired upon by the bomber’s gunners, taking hits from the tail and waist gunners of Lt G. Brock’s B-24 “My Buddie” (B-24H-25-FO 42-95083) who reported pieces of fuselage flying off the jet. The attack took place over BÃ¼chen.

Minutes later, as the 448th Bombardment Group circled back towards their Group RP at Stendal, Ehrler engaged a third Liberator, “Trouble in Mind” (B-24H-30-FO 42-95298) flown by Capt John Ray’s crew over Kyritz (52Â°57â€²N 12Â°23â€²E). A reference is made by surviving crew members to cannon hits in the fuselage that destroyed the Liberator, but Ehrler had only moments before he radioed Major Theodor Weissenberger that he was out of ammunition and intended to ram the bomber. In any case, both planes were destroyed in the ensuing explosion. The B-24 crashed at KrÃ¼llenkempe, near Havelberg, as Maj Ehrler’s jet fell to earth in the woods of Scharlibbe, where he was killed. His body was recovered the following day at Scharlibbe, near Stendal, where he was buried. Ehrler’s grave at Stendal confirms the date of death as 4 April 1945.

“Theo, I have run out of ammunition. I’m going to ram this one. Good bye. We’ll see each other in Valhalla.” – Heinrich Ehrler’s last transmission over the Squadron Radio Network before he rammed the B-24 bomber “Trouble in Mind,” piloted by Captain John Ray, destroying both aircraft and killing himself. “Theo” refers to Theodor Weissenberger.

Walter Schuck who followed the R/T exchange over the loudspeaker in the ops room recalls Ehrler’s last words slightly differently. He believes they were: “Theo, Heinrich here. Have just shot down two bombers. No more ammunition. I’m going to ram. Auf Wiedersehen, see you in Valhalla!”[13]

A BF 109, number 13605 of the 6./JG 5 was found in Russia, and was later purchased and recovered by warplane restorer Jim Pearce on November 2003. The aircraft was the one flown by Ehrler on his 200th kill. Afterward he transferred to JG 7 to fly the Me 262. The airframe was later shot down by Russian Flak over northwestern Russia and was forced to land in the tundra, and had sat there until it was recovered. It is currently being restored.[22]