Too bad you don’t understand German …. she is smart, feminine and cute… and a good interviewer, just 26 years old. This was literally her first journalism job.

The German guy (Ernst Wolff) is ripping the IMF [International Monetary Fund] to shreds for giving Ukraine a loan, since by IMF rules no country can get an IMF loan if it has not paid its loans back to any country that is a member of the IMF (such as Russia). So now the IMF is changing the rule — so Ukraine can welsh on billions Russia lent it. The German, Wolff, says the US must start a war soon or its economy, which is war-based, will collapse!

He is saying openly the US and CIA installed, using the Maidan upheaval, a total puppet regime in Kiev that is totally incompetent in both war and peace.

Ukrainian putsch-president Poroshenko is a fat, useless Jewish oligarch-billionaire who made chocolateÂ — and whose Jewish father did eight years in prison in Soviet times for fraud; the nerdy prime minister, Yatsenyuk, and the mayor of the capital, Kiev, Klitchko, are also Jews. …..Email from a comrade regarding ISIS, Obama and Putin

Regarding your ISIS article,

….this is something that I had been reading about prior to your email and I was already familiar with some of what you wrote about.Â  I fully agree that ISIS was created by Israeli (and maybe with the help of the CIA or other US black budget military agencies, which are Jewish controlled I think).

Actually, I sent you an email several months ago with a link to a video in which Obama explicitly admitted that the US was training ISIS. Â (Here it is again, in case you missed it or haven’t seen it: Â https://www.youtube.com/watch?v=toIPvS9Pwgg

The fact that there are these long lines of tanker trucks of oil going from Syria to Turkey, about which you write, is, I agree, strong evidence that ISIS is getting funded by selling its oil through Turkey.

It is the Russian military campaign in Syria that exposed this. Â (Russia is the only major power which is really fighting terrorism in Syria. Russia and the Syrian army.) Â By the way the Daily Stormer had an article which showed that the biggest buyer of this oil was … Israel. Â (http://www.dailystormer.com/israel-number-one-buyer-of-isis-oil/)

I read an article today by Paul Craig Roberts, titled “War Is On The Horizon: Is It Too Late To Stop It?” Â One of the main themes of the article is that Putin responded with maturity and restraint to the Turkish shoot down of his plane (even though it was very provocative), but that his restraint is being used against him.Â  It is being used by the media to encourage Europe to see Russia as a paper tiger and to possibly disrespect and/or attack it again.Â  But the main point I am coming to here is that there is a 15 second video at the end of that article wherein Putin says that 50 years ago he learned on the streets of Leningrad that if a fight becomes inevitable, be the one to hit first. He says it in a very serious and earnest tone.Â  Here is that video: Â https://www.youtube.com/watch?v=9QxWYIAtCMU#action=share

This has implications for what he might do as the leader of Russia if he is pushed to far.Â  It is a serious mistake, I think, to not properly respect Russia’s military capability but that is what the US and Europe may be doing.

Russia blasts death onto ISIS from submarine in Mediterranean

War Is On The Horizon: Is It Too Late To Stop It? â€” Paul Craig Roberts

War Is On The Horizon: Is It Too Late To Stop It?

One lesson from military history is that once mobilization for war begins, it takes on a momentum of its own and is uncontrollable.

This might be what is occuring unrecognized before our eyes.

In his September 28 speech at the 70th Anniversity of the United Nations, Russian President Vladimir Putin stated that Russia can no longer tolerate the state of affairs in the world. Two days later at the invitation of the Syrian government Russia began war against ISIS. Russia was quickly successful in destroying ISIS arms depots and helping the Syrian army to roll back ISIS gains. Russia also destroyed thousands of oil tankers, the contents of which were financing ISIS by transporting stolen Syrian oil to Turkey where it is sold to the family of the current gangster who rules Turkey.

Washington was caught off guard by Russiaâ€™s decisiveness. Fearful that the quick success of such decisive action by Russia would discourage Washingtonâ€™s NATO vassals from continuing to support Washingtonâ€™s war against Assad and Washingtonâ€™s use of its puppet government in Kiev to pressure Russia, Washington arranged for Turkey to shoot down a Russian fighter-bomber despite the agreement between Russia and NATO that there would be no air-to-air encounters in Russiaâ€™s area of air operation in Syria.

Although denying all responsibility, Washington used Russiaâ€™s low key response to the attack, for which Turkey did not apologize, to reassure Europe that Russia is a paper tiger. The Western presstitutes trumpeted: â€œRussia A Paper Tiger.â€ http://www.wsj.com/articles/turkey-shoots-down-a-paper-tiger-1448406008

The Russian governmentâ€™s low key response to the provocation was used by Washington to reassure Europe that there is no risk in continuing to pressure Russia in the Middle East, Ukraine, Georgia, Montenegro, and elsewhere. Washingtonâ€™s attack on Assadâ€™s military is being used to reinforce the belief that is being inculcated in European governments that Russiaâ€™s responsible behavior to avoid war is a sign of fear and weakness.

The basis of US foreign policy is the commitment to prevent the rise of powers capable of constraining Washingtonâ€™s unilateral action. The ability of Russia and China to do this makes them both a target.

Washington is using Syria, as it used Ukraine, to demonstrate Russiaâ€™s impotence to Europeâ€” and to China, as an impotent Russia is less attractive to China as an ally.

For Russia, responsible response to provocation has become a liability, because it encourages more provocation.

In other words, Washington and the gullibility of its European vassals have put humanity in a very dangerous situation, as the only choices left to Russia and China are to accept American vassalage or to prepare for war.

Putin must be respected for putting more value on human life than do Washington and its European vassals and avoiding military responses to provocations. However, Russia must do something to make the NATO countries aware that there are serious costs of their accommodation of Washingtonâ€™s aggression against Russia. For example, the Russian government could decide that it makes no sense to sell energy to European countries that are in a de facto state of war against Russia. With winter upon us, the Russian government could announce that Russia does not sell energy to NATO member countries. Russia would lose the money, but that is cheaper than losing oneâ€™s sovereignty or a war.

To end the conflict in Ukraine, or to escalate it to a level beyond Europeâ€™s willingness to participate, Russia could accept the requests of the breakaway provinces to be reunited with Russia. For Kiev to continue the conflict, Ukraine would have to attack Russia herself.

The Russian government has relied on responsible, non-provocative responses. Russia has taken the diplomatic approach, relying on European governments coming to their senses, realizing that their national interests diverge from Washingtonâ€™s, and ceasing to enable Washingtonâ€™s hegemonic policy. Russiaâ€™s policy has failed. To repeat, Russiaâ€™s low-key, responsible responses have been used by Washington to paint Russia as a paper tiger that no one needs to fear.

We are left with the paradox that Russiaâ€™s determination to avoid war is leading directly to war.

Whether or not the Russian media, Russian people, and the entirety of the Russian government understand this, it must be obvious to the Russian military. All that Russian military leaders need to do is to look at the composition of the forces sent by NATO to â€œcombat ISIS.â€ As George Abert notes, the American, French, and British aircraft that have been deployed are jet fighters whose purpose is air-to-air combat, not ground attack. The jet fighters are not deployed to attack ISIS on the ground, but to threaten the Russian fighter-bombers that are attacking ISIS ground targets.

There is no doubt that Washington is driving the world toward Armageddon, and Europe is the enabler. Washingtonâ€™s bought-and-paid-for-puppets in Germany, France, and UK are either stupid, unconcerned, or powerless to escape from Washingtonâ€™s grip. Unless Russia can wake up Europe, war is inevitable.

Have the totally evil, dumbshit neocon warmongers who control the US government taught Putin that war is inevitable? https://www.youtube.com/watch?v=9QxWYIAtCMU#action=share

Dr. Paul Craig RobertsÂ was Assistant Secretary of the Treasury for Economic Policy and associate editor of the Wall Street Journal. He was columnist for Business Week, Scripps Howard News Service, and Creators Syndicate. He has had many university appointments. His internet columns have attracted a worldwide following. Roberts’ latest books areThe Failure of Laissez Faire Capitalism and Economic Dissolution of the West and How America Was Lost.

……Obama purge of top brass — he wants only yes-men

DISTURBING: The List of Purged Military High Officers Under Obama

This week, we published a story on a U.S. Army General calling for the resignation of Barack Obama and other administration officials. Now, we have a very disturbing list of military high-ranking officers that have been purged from the Obama administration.

[H/T Investment Watch Blog] Look up the service records of some of these guys. MOST have perfect LONG services, highly decorated.

I believe only 2 Generals were fired under Bush s 2 terms total. There are currently 48 4-Star Generals. [link to en.wikipedia.org]

Many of these below have spotless records, 25 and up years service, many medals and honors such as Brig. Gen Bryan W. Wampler and Command Sgt. Major Don B. Jordan. 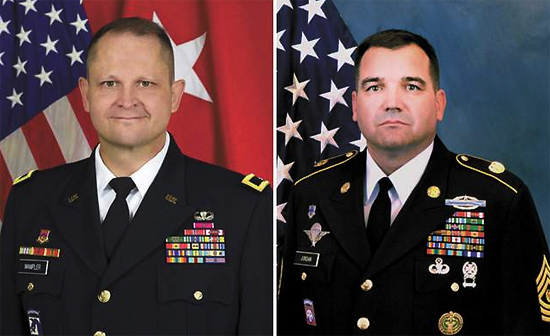 All 157 had been twice passed over for promotion and were within six years of retirement.

2009 Nobel Peace Prize nominee Jim Garrow, a businessman with a huge chain of English-language private schools in China, shockingly claims he was told by a top military veteran (who is suspected of being General Boykin) that the Obama administration’s “litmus test” for new military leaders is whether or not they will obey an order to fire on U.S. citizens.

General William Boykin was the commander of the ultra-elite Delta Force ahd the Deputy Under-Secretary of Military Intelligence under Bush II. He is now a fierce critic of Obama. 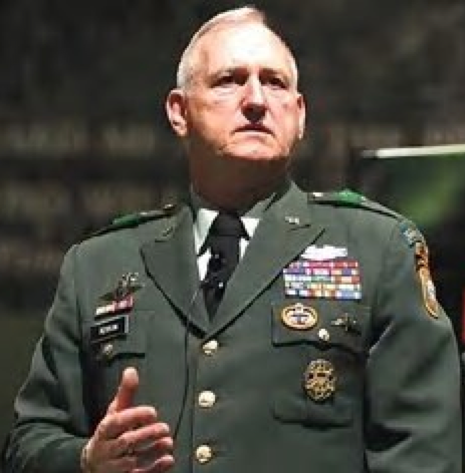 Garrow was nominated three years ago for the prestigious Nobel Peace Prize and is the founder of The Pink Pagoda Girls, an organization dedicated to rescuing baby girls from “gendercide” in China. Garrow has been personally involved in “helping rescue more than 36,000 Chinese baby girls from death.” He is a public figure, not an anonymous voice on the Internet, which makes his claim all the more disturbing.

“I have just been informed by a former senior military leader that Obama is using a new “litmus test” in determining who will stay and who must go in his military leaders. Get ready to explode folks. “The new litmus test of leadership in the military is if they will fire on US citizens or not”. Those who will not are being removed,” Garrow wrote on his Facebook page, later following up the post by adding the man who told him is, “one of America’s foremost military heroes,” whose goal in divulging the information was to “sound the alarm.”