The truth on the USS Liberty is revealed in hot new book by Phil Nelson, LBJ historian.

Lyndon Johnson was behind the USS Liberty murders

[ALL photos below were added by me, John de Nugent] 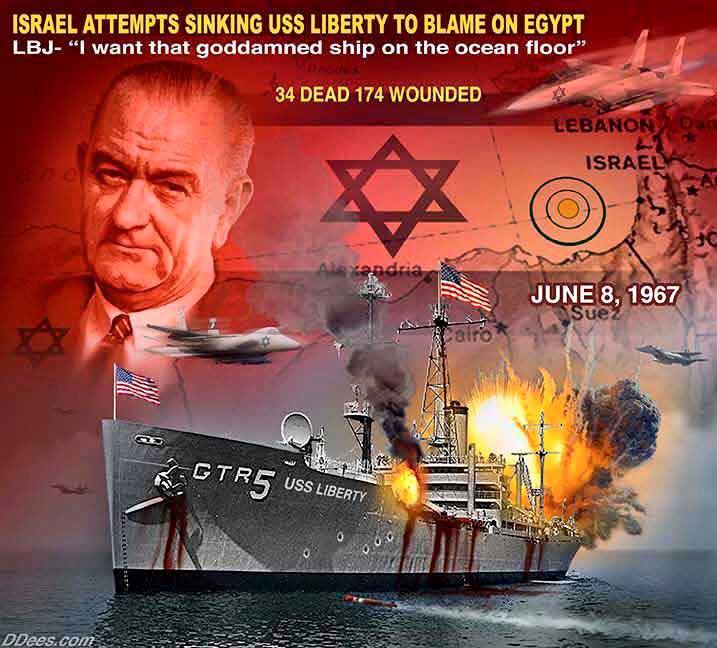 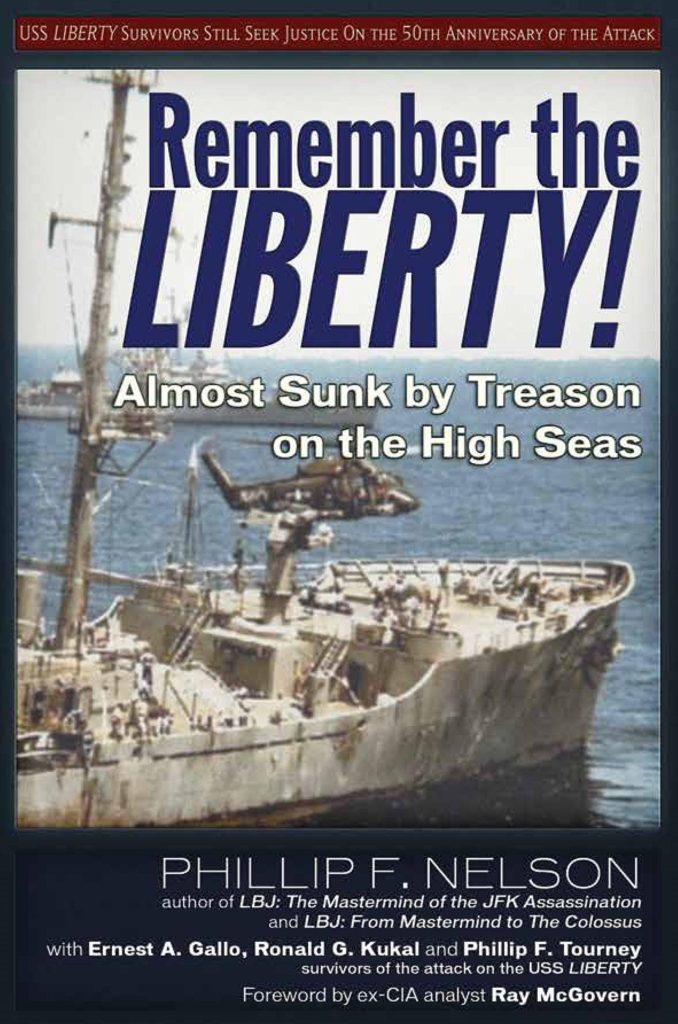 The astounding story in this new book is about one of the most explosive and hidden secrets in U.S. history – one that has never been previously told in such a transformative way.  It is a story that has been kept so secret from most Americans that it is completely unknown by the vast majority, and those who have even heard of it have accepted the lie that it was an accident, a case of “mistaken identity.”  But the very reason it was kept as “Top Secret” by the government and embargoed by the mainstream media was because it was always about presidential treasons and treachery of the highest order.

Remember the Liberty! explores how a sitting U.S. president collaborated with Israeli leaders in the fomentation of a war between them and their Arab neighbors, Egypt, Syria and Jordan.  It had been planned for months, as much as two-plus years – though disguised as “spontaneous” – to be a war that would ensure a victory for Israel, the weakening of her enemies in neighboring Arab nations, and include the acquisition of additional territories for Israel, all incentives to ensure the support of Israeli leaders.

But the 36th President of the United States, Lyndon B. Johnson, harbored his own interests in facilitating what would become known as the Six Day War: To him, the highest tier of his interests always centered around his accumulation of power, and in this case, it was about holding on to it the following year by ensuring his reelection. 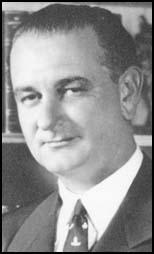 Upset with his loss of popularity by Jewish voters, he wanted to give Israel as much covert – and ultimately, had the plan succeeded, overt – support as possible in the plan to engage their neighbors in that war, including the creation of a pretext to join them in attacking Egypt.

This book finally exposes the actual cause – the only realistic possible explanation – of the mysterious, and unresolved, vicious attack on a U.S. Naval ship. After the botched plan had been executed, the ship refused to sink even after being hit by a torpedo, leading the attack to be cancelled and a massive cover-up invoked, including severe threats for the crew members to “keep their lips sealed.” As the ex-CIA analyst Ray McGovern put it in the book’s Foreword, those orders “put steroids to the PTSD suffered by many of the survivors.” That cover-up is still, barely, in place, and now completely exposed. Written largely by three of the survivors themselves (Ernie Gallo, Ron Kukal and Phil Tourney [JdN: I met Tourney in 2008 and did a radio show with Kukal in 2016 — heroes both]), the truth is finally being told, with the remaining secrets of the real story finally revealed.

Remember the Liberty! puts much more focus on the brutality with which the Johnson administration and the U.S. Navy hierarchy treated the sailors themselves, not only then, but, as importantly, continuing even now. 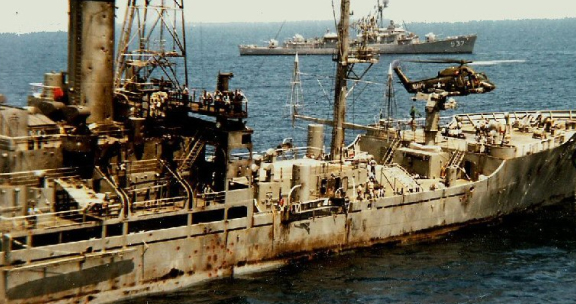 It began before, during and immediately after the attack but – because of the threats of prison “or worse” if they ever uttered a word about it, even to their wives or parents – it festered for decades, while they had to live – alone, sans support groups – with the horrors they had experienced first-hand, in real time. 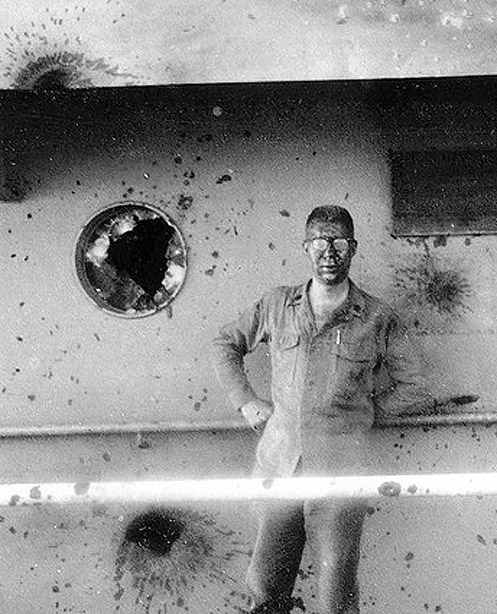 It meant keeping their appalling memories within themselves for 15-20 years before they felt safe enough to even discuss it with anyone else.  Their stories relate how they have continued to be marginalized and dismissed by the mainstream media (MSM) and accused of anti-Semitism by Israeli defenders in knee-jerk fashion.  In fact, the book contains an entire chapter dedicated to this point, along with other references to the same point within other chapters. 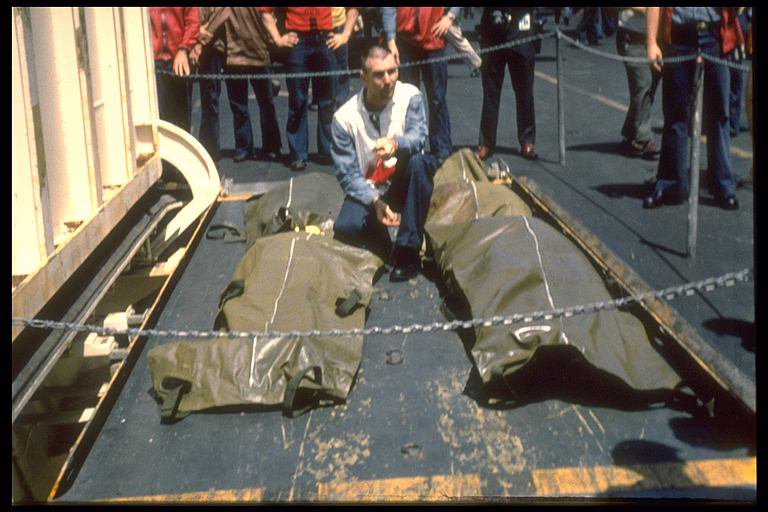 Another very significant point – never previously noted in any other book on this “incident” – is how, after the motor torpedo boats had fired four torpedoes and all had missed the target, the fifth torpedo which hit the Liberty was fired, according to one sailor’s account, as the result of a presidential order to one of his own ships. 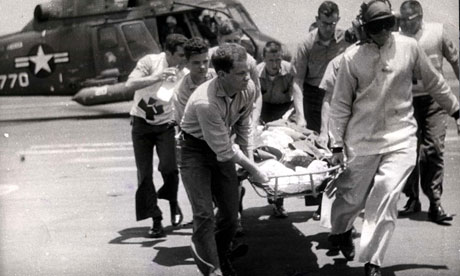 The severely wounded sailor who discovered this part of the story – a well-respected man of impeccable reputation – was nearly killed during the attack, only saved by another sailor who came to his rescue and helped him to the medics, holding his intestines inside his abdomen until he delivered his fellow sailor to the ship’s only doctor. 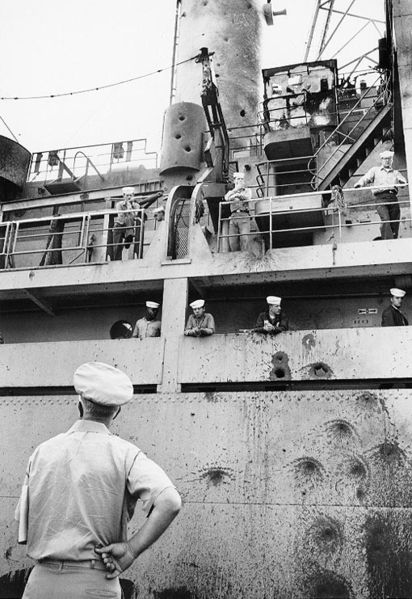 When he was finally released from the hospital and returned to the U.S., he then discovered that his Navy records had been fudged to hide the fact that he was even on the ship, so he had to hire an investigator to prove it in order to obtain his disability acknowledged. 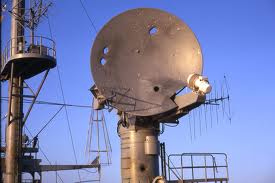 His investigator had high-level Pentagon contacts who revealed many of the hidden secrets to him, and that’s how the survivor found out about that “fifth torpedo.”   No one else has ever come forward to verify his story, and allow their names to be released, so, accordingly, we had to treat this part of it very “deftly,” almost as though it was merely a “rumor” that may one day finally be acknowledged.

Many other books have been written on the Israeli attack on the USS Liberty.  Some of those present the case put forth by the U.S. and Israeli governments’ “official story” (See those by A. J. Cristol, or Michael Oren), developed to perpetuate the contrived cover-up account, hiding the incriminating facts and essentially writing it off as a freak “accident.” But that was never the reaction of the State Department officials of the time, or the Navy brass who were not under orders to conduct a phony investigation designed to cover it up.  One of them, former chairman of the Joint Chiefs of Staff, Admiral Thomas Moorer, observed that the president’s handling of the Liberty attack was “… the most disgraceful act I witnessed in my entire military career.”

The man who wrote the original fabricated Navy “Court of Inquiry” report on the incident – the report used by those same authors as the basis for their books – eventually retracted all of it:  Former Navy Captain Ward Boston Jr., JAGC, in 2004 wrote a scathing renunciation of the book by A. J. Cristol, admitting that the original Navy report was designed to cover up the truths and replace them with bald-faced lies, as we detail in the book.

The many books which have attempted to lay out the substantiated facts behind the attack all come to the conclusion that the brutal 2+ hour attack was not only intentional – nor was it designed to merely put the ship out of commission, which was accomplished within the first five minutes – it was meant to ensure that it sank to the bottom of the Mediterranean Sea and that there would be no survivors who might attempt to “correct history.”  These books (primarily those by James Ennes, James Scott and several others referenced in our book) do not mention the primary factor that actually caused the attack in the first place, and which then created the massive cover-up.

Some of the best books (e.g. Peter Hounam’s Operation Cyanide) did point to strange actions going on at the White House, and suggested that Johnson’s political troubles might have something to do with the chain of events. 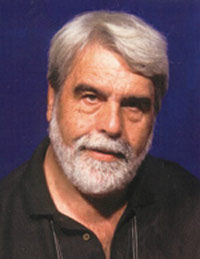 But Remember the Liberty! is the first book to factor into the equation LBJ’s clear psychosis, known to those close to him but long hidden from the public by the press and fawning historians.

Only by understanding his manic desire to win back the political support of Jewish people in the biggest cities – especially New York, Chicago, Philadelphia, Miami and Los Angeles – who had abandoned him because of his Vietnam policies, can one understand what really happened.

Like his previous “false flag” operation – the phantom attack at the Gulf of Tonkin by North Vietnamese gunboats on two U.S. Navy destroyers, conveniently occurring just three months before the 1964 elections, which helped him win his landslide victory – he thought this attack would secure his re-election the following year.

Yet the opposite happened: When the Liberty did not sink – and his devious “false flag” plan to use it as a pretext for blaming the attack on Egypt and join Israel in their victorious “Six Day War” collapsed – his re-election chances were the only thing that sank.  Nine months later he reluctantly announced that he would remove himself from the 1968 elections to the very office that he had lusted for his entire life.

The conflicted goals of the Six Day War are the root cause of the turbulence in the Mid-East, which the world has witnessed for the last five decades.  It has produced ironies, such as the fact that over half of the U.S. foreign aid budget goes to Israel, a well-developed, prosperous economic power set amidst some of the most poverty-ridden nations in the world.

And it was through the paradox of Johnson’s most sordid manipulations that the U.S./Israel relationship became so close in the aftermath of the Liberty attack:  Suddenly, U.S. policy was transformed from being “neutral” towards all countries in the area – as previous administrations had tried to remain, to avoid being seen as partial to either side – to that of openly, aggressively, backing Israel in all possible ways, including its acquisition of nuclear weapons and delivery systems.  Meanwhile, the tensions between Israel and its Palestinian “citizens” in what they consider as “occupied territory” has descended into a state of constant fighting between the two sides, especially as manifested in the walled-off territory called Gaza.  While Israel claims to be the only democracy in the area, that term seems to apply only to those of the Jewish faith or their descendants.  For Palestinians, the more correct term would be “apartheid.”    The worst part of the current state of affairs in the existential Israel / Palestine state is how all of those facets appear to have been the product of the insouciance – or worse, the rigidly pro-Zionist views – of America’s leadership, regardless of the individuals or the parties in power.

This book will undoubtedly come under fire for its controversial assertions.  But any criticisms of it being biased against Israel will be misplaced, since, if anything, it finally puts the primary blame for the attack on the USS Liberty where it should have always been: upon Lyndon Johnson.  Israeli leaders were only taking their despicable actions because Johnson had insisted on it, implicitly, as a condition for his assistance in their plans for extending Israeli borders into Palestine.    The fact that his diabolical plan failed, and the Liberty did not sink, thanks to the heroic efforts of the survivors, saved the world from the nuclear conflagration which might have otherwise occurred, with Jerusalem – the “city of peace” – at ground zero. 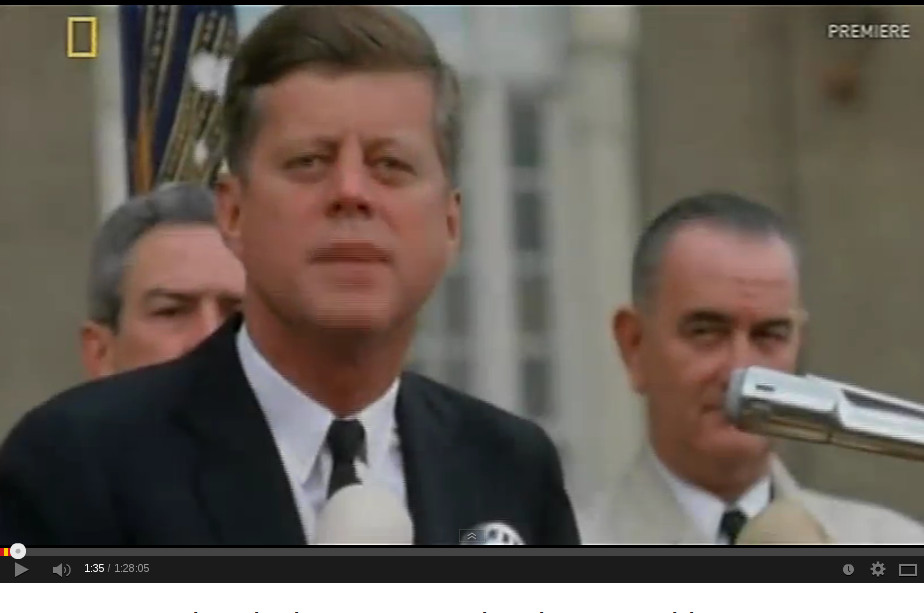 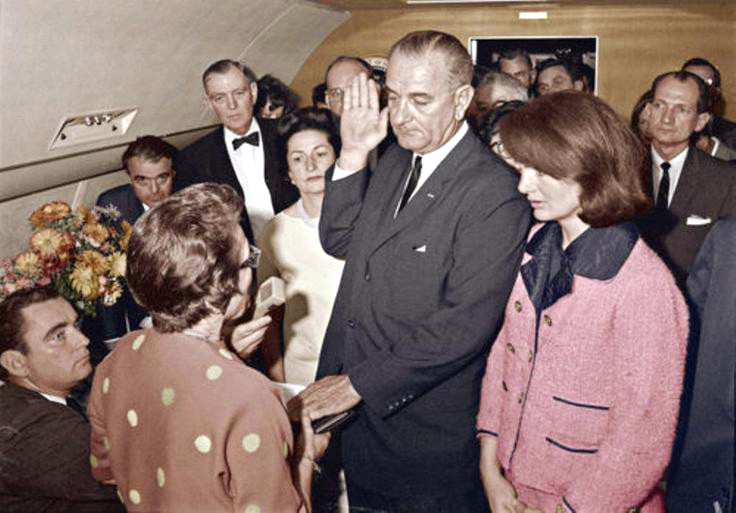 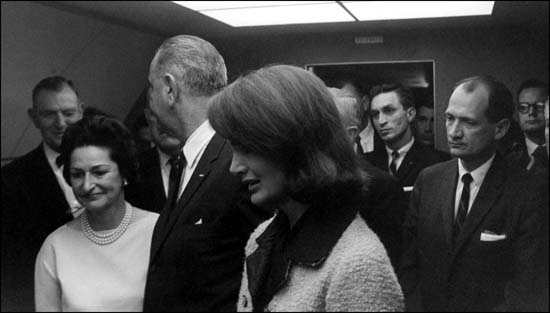 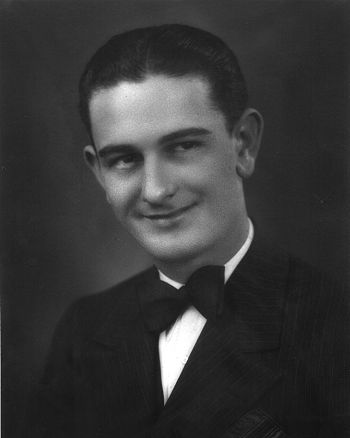 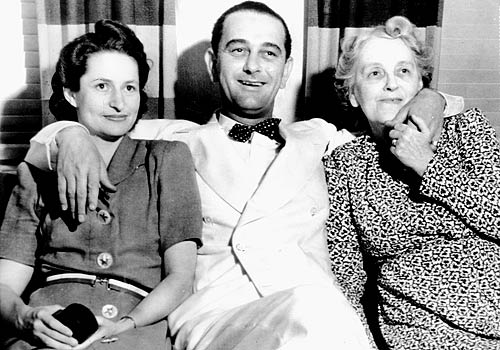 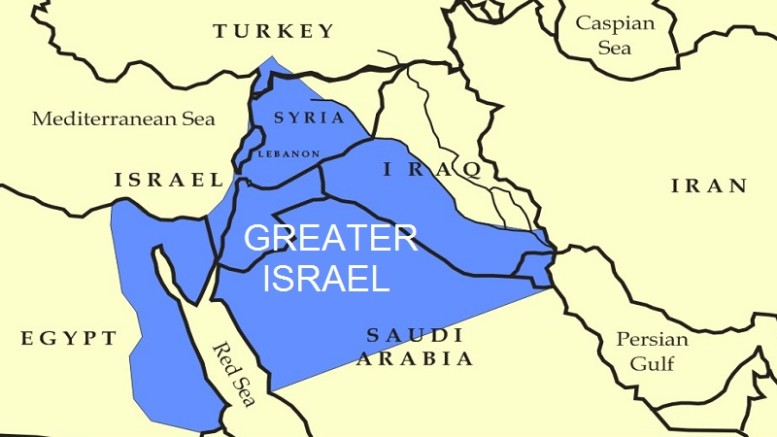