— who worked 55 hours a week for $2.50 an hour (in modern currency) in a dingy, Jew-owned sweatshop in 1913 — refused to succumb to the sexual advances and threats of her Jewish boss, and fought him to the death when he attacked her.

Socked in the eye when she resisted Frank; fell against a steel lathe handle and fainted; was raped and strangled by a Talmudic sex fiend Note that the goy female Mary Phagan is not even shown on the cover, despite the title 😉 It is all about the poor “victim of antisemitism.” The most eminent white men of Georgia stopped reading and took action 100 YEARS AGO TODAY — when even two US Supreme Court decisions against the murderous Jews could not stop the ADL from trying to get Frank off! The time for words was over!Â On Aug. 12. 2015Â I was the guest on the Dr. James Fetzer showÂ to discuss the justified lynching (despite Jewish moaning to this very day, a century later, about “antisemitism”) of theÂ top Jewish official and businessman Leo Max Frank in 1915. My contention to Dr. Fetzer, like that of the State of Georgia, is Â is that he was a pervert, a sexual harasser, a sadistic pedophile, and a child killer. He then joined the United States Marine Corps, and was second lieutenant in an artillery unit.[7] In the early 1960s he was stationed at Okinawa, Japan.[13][15] the State of Georgia As an explanatory note to the listener, this audiobook continues the series of articles from the pages of Watson’s Magazine, read aloud for you today in 2015 but composed one hundred years ago, in 1915, by the heroic and crusading publisher, lawyer and political leader, Thomas Edward Watson.

Watson’s illustrious career in legal, political and publishing service to humanity, to the white gentile race, and especially to the humble, decent working people of the South and of his native state of Georgia, was crowned by these great articles, found in the January, March, August, September and October 1915 monthly editions of his eponymous magazine. 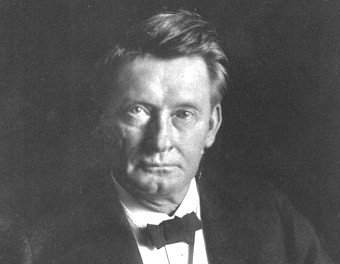 Their history-making effectiveness is proved by the fact that they led directly to the one and only lynching of a powerful Jew in North American history, that is, the seizing from prison and hanging of the Jewish pedophile, B’nai B’rith of Atlanta president, and child murderer, Leo Max Frank, in August 1915, shortly after the articleÂ came out which you are about to hear!

Watson wrote twoÂ post-mortem articles as well, in September and October of that year 1915, justifying the execution by the people of Frank, and he was elected as a hero by the people of Georgia in 1920 to the United States Senate, where he served until his death in 1922.

Yes, due to the mighty pen of Thomas Edward Watson, plus certainly also the shocking nature of the crime; the beauty and purety of the child victim; the sympathy for white children forced to work 56 hours a week in factories for lecherous northern Jews; and the nationwide jewish campaign against the people of Georgia, involving threats, bribes and media mudslinging Â â€“ a people who, btw, had not been at all antisemitic before Leo Frank — the finest men of Georgia â€“ judges, a former governor, the sheriff of Cobb County, businessmen and lawyers — stormed the prison, pistols drawn, where Frank was being held, and avenged with the rope the rape and murder of a 13-year-old working-class factory girl, the beautiful, friendly, kind, virtuous child laborer Mary Phagan, who had just ironed her little Sunday dress for church the next day, and was raped and murdered by her own Jewish boss on Confederate Memorial Day.

It is important to note in regard to this lynching of a powerful Jew that threeÂ juries and five instances of the court system — county, state and federal, including twice the United States Supreme Court — had condemned Frank, either indicting him, finding him guilty, or rejecting all his many appeals. But when a crooked governor named John Slaton commuted Frank’s death sentence to life in prison, preparatory to getting him yet another trial — and, incredibly, Frank was literally a client of the governor’s law firm — the outraged and disgusted white men of Georgia had finally had enough, and they acted. 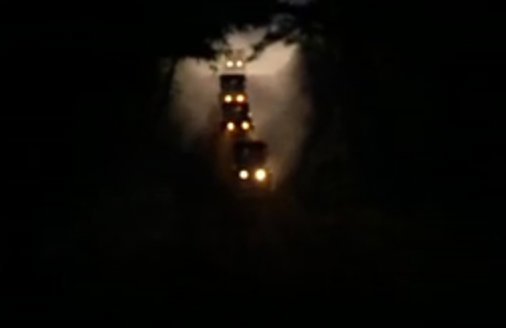 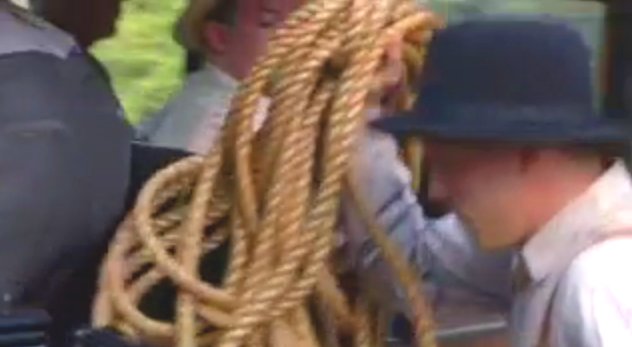 The stirring mobilization for justice by the top men of Georgia for this poor little, auburn-haired Irish factory girl was in large measure due to this article which you are about to hear, from Watson’s Magazine of August 1915. 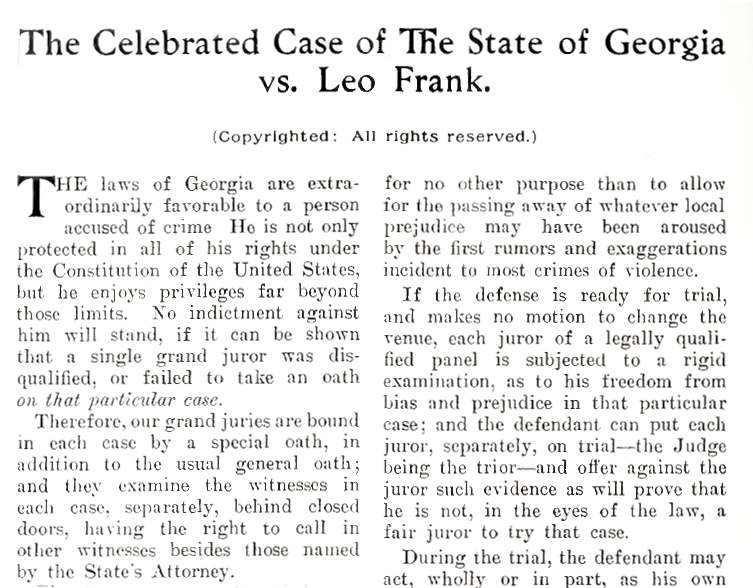 What is especially rewarding also about this issue is how Watson adds new reasons for the guilt of Leo Frank to the previous two articles in his magazine, and is not merely rehashing his old talking points.

As a trial lawyer for 25 years, Watson was a legal expert himself, and very good at explaining the law to his lay readership, most of who certainly and fortunately had no reason to be experts on murder investigations or trials.

1) Watson asks why, if there was a mob spirit and rampant antisemitism, did the Atlanta dream team of Rosser and Arnold not change the venue of the trial? 2 ) He gives more details on Mary’s blood, found on the second floor, and on what a loser Leo Frank was. He spent all afternoon in the factory trying to cover up his tracks as the murderer, but he neglected the most obvious thing, cleaning up the murder scene! Â With hot soap and water, Frank could have removed the blood of his victim from the wooden factory floor much better than by smearing haskoline on it, that is pot ash, which left a huge grayish mess.

What was he thinking? Obviously he was freaking out and panicking by not destroying the evidence.

Further, Frank could have easily inspected the lathe that Mary fell against when he hit her in the eye, whereupon she slumped to the floor, passed out. He should have removed the strands of Mary’s hair from the lathe, …since he was the one who knocked Mary against the lathe by clobbering her. In falling back, she got a two-inch gash in her scalp, which was cut down to the bone of the skull, a shock which doubtless knocked the girl out. As Watson here points out, the one blow actually led to two wounds, front and back: the black eye and the gash on the back of the skull.

It is just amazing that Frank did not clean up the crime scene, neither blood nor hair, Â for all his vaunted Ivy League education and engineering degree, which normally produces a man of a logical and practical mind. Leo was really what in Yiddish, the language of his German-Jewish ancestors, would be called, first, aÂ noodge, a “pain in the neck,” because he irritated all the decent girls in the factory with his sexual come-ons and got nowhere with most of them, and in fact eleven testified against him, so he was no charmer.

Two, he was full of chutzpah,Â “nerve,” another Yiddish word for you.

And three, he was a nebbish, a loser, because if you are going to murder someone, and carry the body elsewhere, don’t forget to go back and clean up the traces of blood and hair.

Putting the body in the basement could shift suspicion toward night watchman, but leaving the blood and hair still up on the second floor, not cleaning it away, was just plain stupid. Instead, Frank’s nutty scheme was to get the black janitor, Jim Conley, to write fake notes, posing as Mary Phagan, who in these bogus notes is herself supposedly describing being raped (quote: “he play with me”)Â by the black night watchman.

I cannot think of a worse use of Frank’s precious time on Saturday afternoon than forging ludicrous notes by the supposed Mary describing how the night watchman was raping her.

Why would she even BE in the factory at night? Her goal was to pick up her pay quickly at noon from her despised boss, and then go to the Confederate Memorial Day parade — not wait in a dark basement for four hours for the black night watchman to come on shift, and rape her! And while hair-brained Leo Frank was cooking up his “Mary Phagan death notes,” her family began putting the alarm out about their missing daughter. 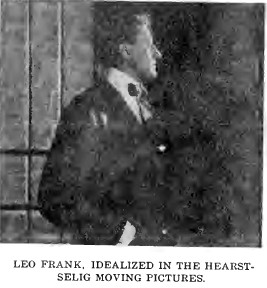 FromÂ Hearst Over Hollywood: Power, Passion, and Propaganda in the MoviesÂ Â By Louis Pizzitola

William Selig shamelesly let himself be called “Colonel Selig,” though he had no military experience. As for his rather homely, masculine-looking and overweight wife, Louise Selig Frank, she is portrayed as pretty, petite and utterly devoted,