……Washingtonian says even in DC no one is really FOR Hillary

A close friend in greater Wash DC (I lived there for 18 years myself), a WN whose affluent, card-carrying liberal relatives refuse to listen to any reality at all about race or the jews, told me they nevertheless are all for Trump.

I was amazed. He said, “Yeah, they like him, and can’t stand Hillary.” I asked him a further question:

Do you think that because the jewsmedia have demonized Trump into the new Hitler…. ….the polls are going to be way, WAY off, and a ton of whites — and many blacks and hispanics — who tell the pollsters they are uncommitted actually, secretly, plan to go out and vote for Trump?

He said: Yes, I do. It could be a huge upset. And Victor Thorn was certain Trump will win. You have to see the video at least in this blog. Hillary is evil incarnate.

Trump MIGHT win; Bernie supporters NOT falling for Hillary

……The Left is Afraid 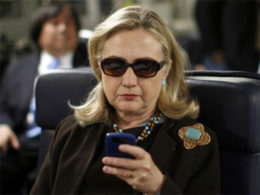 Recently I returned from the most liberal place on earth. For security reasons, I cannot divulge its name or location. Just imagine a place where SJWs and aging hippies go to get in touch (no, really in touch) with their feelings, get rolfed, get high, get in a hot tub, and hope to get lucky. What was I doing there? Well, some of the above, passing as one of them (just think of me as asecret agent — which is not far from the truth).

I’ve been to this place before, but actually this was the first time that the conversations turned over and over again to politics. I listened, for the most part. And, gentle reader, what was said was fascinating. Never before have I heard Leftists sound so utterly dejected. The hot topic, of course, was the election. Plenty of venom was spewed at Trump, which was neither surprising nor interesting. It was the venom spewed at Clinton that really surprised me.

Practically everyone there had something good to say about Bernie Sanders — and nothing bad to say at all, aside from the fact that they didn’t think he could win the election, even if by some miracle the Democrats were to nominate him. A sizeable number, in fact, were enthusiastic Sanders supporters. All were resigned to the fact that Clinton would win the nomination, and none of them — none of them — was pleased about this. Everyone I listened to regarded her as a corrupt political hack. They strongly disliked her on a personal level. Indeed, their antipathy to Hillary was practically indistinguishable from that of most conservatives.

A couple of SJWs said that they would not vote for Hillary. They might write in Sanders, or not vote at all. But they were quickly chastised by the others: “Well you don’t want Trump to win, do you? Clinton is better than Trump, isn’t she? You have to vote!” Meekly, one of them began backtracking: “Well, yes. Yes, I suppose I will have to vote for Hillary . . . .” he said, looking down, his voice trailing off. I doubt he will make it to the voting booth. What was truly astonishing, however, is the degree to which some of them were willing to defend Trump. “He’s less corrupt than Hillary,” one vegan declared between sips of beet juice. “At least Trump is anti-globalist, like Sanders,” said a blond SJW whose dreadlocks had resulted in her being accused earlier in the day of cultural appropriation. “And Trump says he will take a more evenhanded approach to Israel,” said one old gentile Marxist. Israel was mentioned several times, always with great contempt.

As Donald Trump has pointed out, Hillary is entirely in it for herself. Even her campaign slogan is perfectly self-centered: “I’m With Her.” It’s all about her. This woman collects positions of power like other women collect beauty pageant tiaras (though Hillary has never been in danger of winning any of those). Truly, she is just a better educated version of Sarah Palin.

Trump just launched a website subtly named lyingcrookedhillary.com. (I guess crookedhillary.com and lyinghillary.com were already taken.) It is one stop shopping for those interested in the details of, well, just how crooked and lying this bitch really is. And that was the point repeated endlessly by the Leftists I kept getting into hot tubs with: Hillary is incredibly vulnerable, because there is so much dirt on her she might as well already be six feet under. How stupid can the Democrats be? By contrast, as all the SJWs and hippies had to admit, Trump seems pretty clean.

“Why not Bernie? Why not?” was the agonized, repeated refrain all weekend. Well, there’s an answer to that: because an elderly Jewish communist from Brooklyn doesn’t have a snowball’s chance in Gehenna of winning over Mr. and Mrs. Middle America. That these were the two choices — Hillary and Bernie — shows just how out of touch the Democrats are. It’s like a choice between a post-menopausal Boss Tweed and an avuncular Leon Trotsky.

How the Democrats feel is pretty easy to put into perspective with a simple analogy. Imagine how Republican voters would currently feel if Jeb Bush had wound up edging out Donald Trump and were now the presumptive nominee. Note that I said Republican voters: I mean the people who turned out in record numbers to enthusiastically support Trump, not the Republican Establishment. But suppose that the number of Republican voters looking to play it safe, with a safer, more Establishment candidate, had prevailed. I will vote for Trump. Indeed, I am an enthusiastic Trump supporter. But I don’t give two shits about Jeb Bush, who is a spineless, mainstream nobody with a famous name, whose own mother didn’t think he should run. If Bush had the nomination, I would be staying home.

But the typical Republican voters who have catapulted Trump to the nomination — against what all the pundits said were the odds — are not that “typical” either. And if they were denied their choice, and offered a poor substitute, I’m betting scores of them would stay home on Election Day. I’m betting the same thing about Democrats. Yes, Hillary scored bigger than Sanders in the primaries. But that does not mean that she has enthusiastic support. It simply means that given a choice between the familiar, though unloved wife of the Big Bopper and uncleTrotsky, average democratic voters held their noses and chose the former.

In fact, I’m betting that a sizeable number of democratic voters may defect to Trump. Even unlikely (and, well, unliked) celebrities like Susan Sarandon and Roseanne Barrhave said they prefer Trump to Hillary. A recent poll showed that 20% of Sanders supporters would back Trump over Hillary. Trump is a phenomenon we have never seen before in American politics. He is decidedly not a typical Republican, and is a genuinely anti-Establishment candidate. This is true of Sanders as well. The hippies being massaged on the tables next to mine agreed that Trump and Sanders had this in common — and that the “Trump-Sanders phenomenon” was a rejection of the Establishment, as represented by Hillary, Jeb, et al.

It is likely that Trump will have precisely the broad appeal that the mainstream media claims he does not, and cannot have. Trump, they say, is “tanking” now that he is no longer playing exclusively to his “base.” But just who is that base? It’s not gun-toting evangelicals out to ban abortion (because we just don’t have enough black babies) and restore prayer to state-run schools. Those people don’t seem to like Trump that much, because socially he is actually a liberal. The Donald is fine with gays, abortion, and marijuana. No, Trump’s base is disaffected Americans of all sorts who feel they have been sold out by an Establishment jointly operated by Democrats and Republicans. They want out of the global economy. They want to live in genuine communities again. They don’t want to feel like strangers in their own country. They don’t want to live in fear of bomb-throwing kebabs.

The Trump base is largely white (still the majority of the population). But we have found in recent months that Trump has his Hispanic supporters as well, who don’t want to compete for jobs with a never-ending flood of their own kind — and who know all too well that Trump is right about Mexico sending killers and rapists across the border. And Trump has his black supporters too, who are sick of sharing the victimhood spotlight with Hispanics, and being underbid by them on the job market. Trump polls better with blacks than any previous Republican candidate. And Trump has his Jewish supporters, like Bernie Marcus of Home Depot, who has promised to sponsor the building of The Wall. At least some Jews also have the good sense to see that Muslim immigration might not just be a problem for gays.

It’s actually hard to find a reason why anyone would be enthusiastically in favor of Hillary Clinton. I can think of only one: he’s not Trump. The only thing that can guarantee a strong turnout for Hillary is antipathy to Trump. With a nearly complete absence of positive reasons to vote for Hillary, that antipathy would have to be tremendous for Trump to lose the election. But how can it be tremendous when even stoned vegan hippies have good things to say about Trump, and not a kind word for LyingCrookedHillary?

I paid a dear price for this information: I lost my Thor’s hammer at the bottom of a hot tub.