My blog has given the links to my two radio shows with Simon Roche of South Africa and the Nicholas van Rensburg prophecy concerning white South Africa, Britain, America, Germany, Russia, Mandela, Obama, Trump, and Putin — and WWIII.

The worst thing would be nuclear plants being damaged and melting down, with vast amounts of radioactivity escaping. We have seen this with Czernobyl in 1987 and Fukushima in 2011. Depending on air and water currents, radioactivity can spread around a continent or a whole ocean.

Der Spiegel magazine in Germany has just published maps of how a very old nuclear power plant in Belgium, located int the town of Tihange, could radiate different parts of Europe, depending on the wind and rain right after the mishap. There are many OLD plants like this, not in Germany but in neighboring countries. Germany is actually getting OUT of nuclear power, but not its neighbors.

This shows the area that would likely be very affected with weak winds. 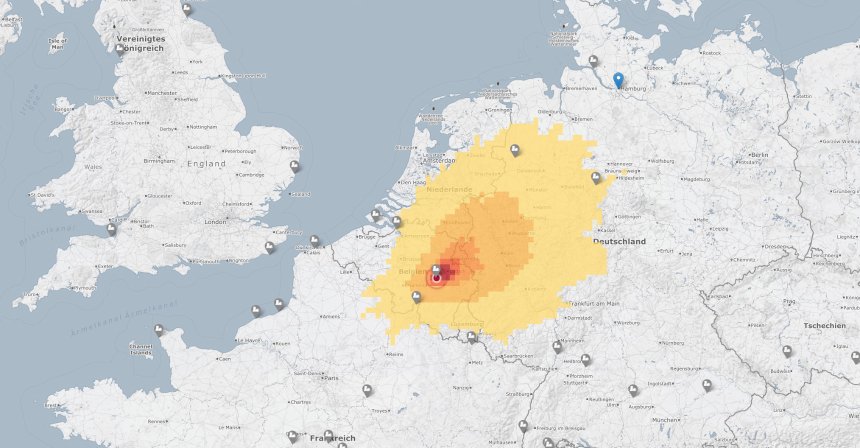 But with strong winds and rain, it could blow in all directions. Dark red means areas where no one can live for thousands of years. Yellow means you can live there, especially if you take iodine tablets, Â but crops might or might not be edible. (Atomic bomb radioactivity, in contrast, using different nuclear materials, would be mostly harmless after about three days. No one really wants to make huge swaths of the earth permanently unusable. ) 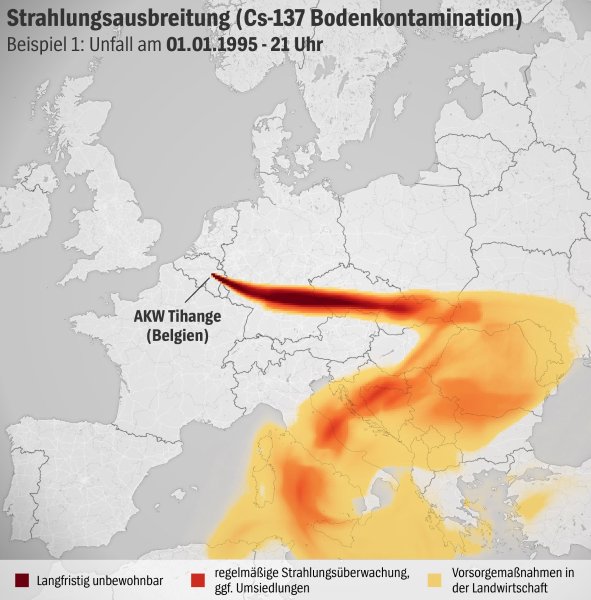 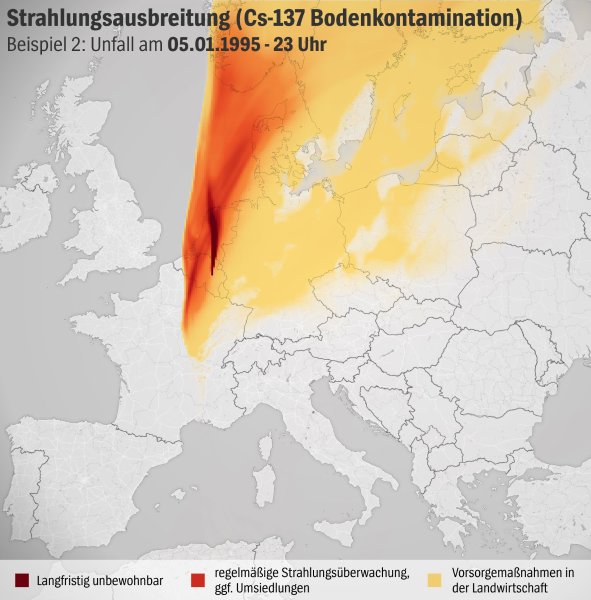 Here the wind shifts around — and much of Europe “gets it.” 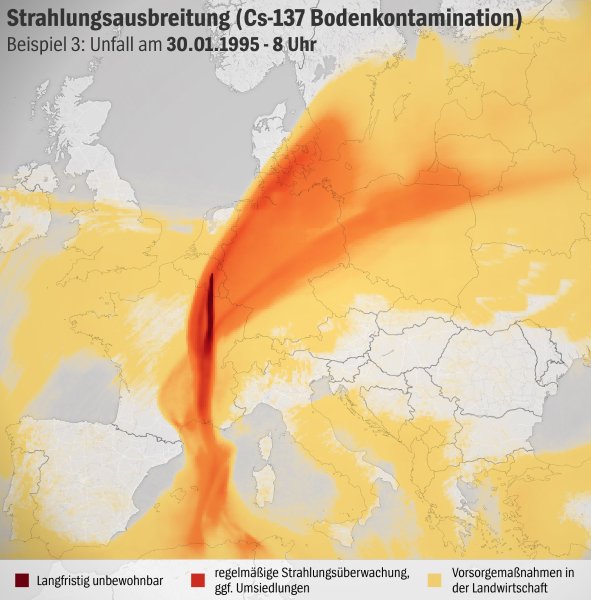 Here northern German, the Baltic countries and Russia would be hit. 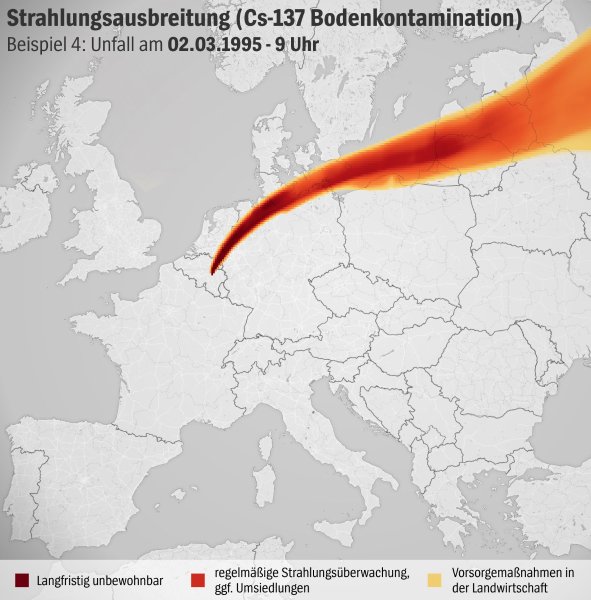 For the US map, there are many nuclear power plants, and the same vagaries would apply. After a full-scale nuclear war, which Van Rensburg predicted (with certain German forces and Boers surviving down in Africa), weather patterns might be very different from now, especially if a “nuclear winter” happens — dust in the atmosphere from destroyed cities blocks out the sun and everything gets colder and overcast for about two years. 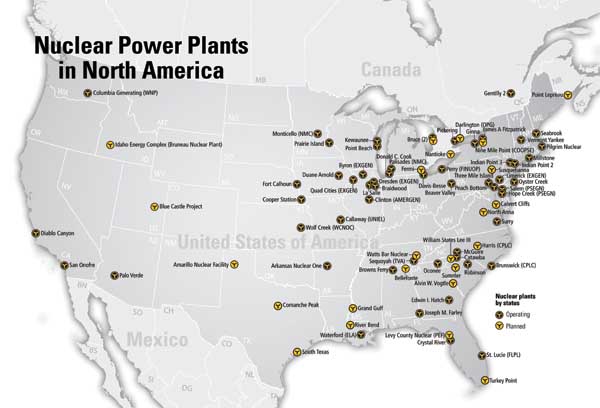 It is essential that Trump realizes what a disaster the American neo-cons are pushing him into. A confrontation with Russia (and perhaps China), triggered by the Syria, Iran or North Korea situations, would be a catastrophe.

More on the radically bizarre collision between a huge cargo ship and a US Navy destroyerÂ https://www.youtube.com/watch?v=eANUtcpxL04

This theory makes sense. Electronic warfare (by China or Russia?) paralyzed the US ship so it could be hit.

Jim Gaul Would north Korea be sophisticated enough to do that?
Like Â· Reply Â· 13 hrs
Remove
John de Nugent
John de Nugent With Chinese or Russian tech, yes. But I suspect that it was China or Russia behind this. Russia jammed a similar US Navy destroyer in 2016, the USS Donald Cook.

These are TWO-BILLION-DOLLAR warships. I was friends and the tutor in German of a skipper of the USS John Paul Jones. It is inconceivable that a US Navy Aegis-class destroyer not pick up on radar a gigantic cargo ship. It is impossible. Something big happened here in this “accident.”
.
.
.

I am facing a water cutoff on Monday. Please send $137.20 if you can. I also just spent $300 to revamp www.resistanceradio.tv, mowing five lawns a week at almost 63. Now Â my hip hurts again. I am also doing another audiobook for funds.

Can you please help today?

I, Margi Huffstickler and Paul Fromm of Canada 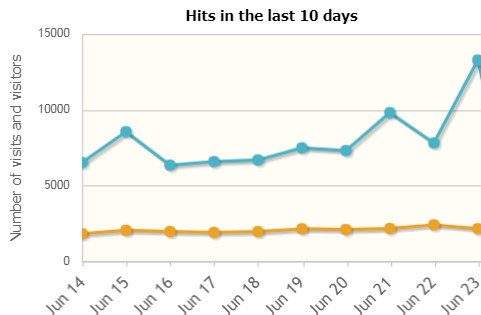