…..Why did Hitler attack Russia?

It is well-known what JosÃ©phine, the ex-wife of Napoleon, said when she heard he was going to attack Russia. (NapolÃ©on still loved her, and she him,Â  but he needed an heir and she was infertile, so on paper he divorced her and married an Austrian princess.)
With all her female intuition, she begged the French ruler to not attack Russia. We all know the outcome. …..email regarding Stalin’s 1940 plan to attack his German ally and all of Europe Very many are Finns and descend from a race of ferocious fighters.. With The Chief Culprit by Viktor Suvorov it is a good way to start a conversation about the soviet-nazi war – “Do you know the real reason Hitler invaded the Soviet Union?” From Wikipedia, the free encyclopedia [All photos and some editing of the Russian-style English done by me, JdN] Igor Bunich (September 28, 1937 â€“ June 15, 2000) was a Russian historian known for offering a number of revisionist interpretations of Russian history. He is most famous for claiming that Joseph Stalin was actively preparing to invade western Europe in 1941 before any suggestion of the German eastward assault in Operation Barbarossa.

It can be found in the so-called “Osobaya Papka”, a file which contains about 100,000 Top Secret documents. In this file it is document Nr.103202/06. The paper is signed by Marshal Semyon Timoshenko and the chief of the General Staff at that time Merezkov. It is dated 18 September 1940, three months before the German “Operation Barbarossa” was signed.

After Georgy Zhukov [photo from 1940] became chief of the general staff in February 1941, the plan was called MP 41 (Mobilisatsyonni Plan 41). The total number of the German warplanes at that time was only about 6,000 although the majority of the Soviet aircraft was obsolete.

Bunich is not the only Russian historian who questioned the thesis of the “cowardly attack of the Wehrmacht against the peace loving Soviet Union“.

In 1989 appeared the book “Ledokol” (Icebreaker) by Viktor Suvorov, whose real name was Vladimir Bogdanovich Resun, [a Jew, btw] which advanced this theory.

In February 1992, even the official military-historical Journal of the Russian Forces â€” “Voenno-istorichesky Zhournal” â€” [1] published an article with the heading “Unquestionable Facts of the War’s Beginning”, where a speech by Zhdanov, one of Stalin’s intimates, expressed that the Soviet Union had already started an “aggressive foreign policy” in 1939, with the decision to attack Finland.

JdN: an excellent (realistic, accurate and exciting) Finnish movie with English subtitles about the Winter War of 1939-40

This article also mentions that the defense efforts of the Soviet Union were impeded by the prevailing aggressive thinking of the Soviet General Staff. These plans were extending to 1943 and to such an extent, that no effective measures against the German assault could be taken.

Bunich does not at all intend to polish up the image of Adolf Hitler. His first intention is to analyze who is guilty of having caused the immense human losses of Russia in World War II. He discovered a document, in which the total number of killed Russian soldiers is said to be 30.5 million â€” 8.5 million of them directly killed in battle, 22 million died after from their wounds, one half of them through tetanus.

[JdN: I disagree with this huge figure; after the war, the Soviets used inflated casualty figures every single time to explain the backwardness of the Soviet centralized economy and always said: “But look how many people we lost in WWII!” It was an excuse for every failing of communism.]

In Bunich’s view Stalin is not the main responsible for these human losses, but Zhukov. Stalin was a statesman but not a soldier. In strategic questions he had to rely on the advice of his generals, and Zhukov was not a very talented one. For example, he gave order to pile up heaps of ammunition under the bare sky in Soviet occupied Poland to a kind of Egyptian pyramids, which could be easily detected by the scout planes of the “Fliegerabteilung” of Admiral Wilhelm Canaris‘ “Abwehr” patrolling over this region as early as a month before the German attack. The Germans got a good picture of this monstrous mass of men and material and later easily destroyed it.

Bunich’s “Operatsia Groza'” is full of yet unknown facts about the Third Reich. For example, he reveals why Reinhard Heydrich was replaced as the head of the “SD” (“Sicherheitsdienst”) by Walter Schellenberg and was made instead the Governor General of Bohemia: This happened because his major rival Admiral Canaris showed Hitler the file of “Chaijm Aaron Heydrich”, Heydrich’s grandfather, a first violinist in the Vienna “Hofoperette” – and who was Jewish. Bunich mentions a remarkable talk between Walter Schellenberg photo] and the Soviet ambassador to Germany, Vladimir Dekanozov, which took place in March 1941. Both men were secret-service veterans and this, in addition to a lot of drinks, created a friendly atmosphere between them.

Dekanosov asked Schellenberg: “We heard that there exists a plan called Operation Barbarossa which means a German assault against us.”

Schellenberg remained quiet for a while and then said:

“This is correct, this plan exists and it was elaborated with great thoroughness. We communicated this plan through secret channels to the Americans and the British, to make them believe that we are preparing to attack you. If they believe it, we have a good chance to succeed with our ‘Operation SeelÃ¶we‘ [Sea Lion, the invasion of Britain].

“But, we also know about Your “Operation Grom”” (“Grom” means thunder and “Grosa” thunderstorm). Dekanosov informed Stalin about this talk with Schellenberg – and Stalin decided to believe Schellenberg!

Only days before “Barbarossa” began, it turned out that Merezkov, its author, betrayed “Grosa” to the Germans. According to Bunich, the German invasion of June 22, 1941 succeeded in the beginning because large segments of the Red Army surrendered or fled into forests and deserted. Adding to the confusion was Stalin’s order to initiate the “Grosa” plan to attack.

Also, some people gradually realized that Adolf Hitler and the Germans saw them as “sub humans” (Untermenschen). On that ground the resistance movement came into being and Stalin was able to lead this war known as the Great Patriotic War. On the backside of the cover of “Operatsiya Grosa” Bunich mentions that on July 10, 1941 Stalin had [made his final decision] to attack Western Europe.

All this is basically true, and of course Stalin planned on attacking Europe. It is an aggressive command of communism to “liberate the workers of the world.” (It is similar with Islam, which aggressively commands “jihad.” All the world must become muslim so they get their 72 virgins.) The problem was that Hitler fundamentally mishandled Russia from the beginning.Â  At early as a 1925 speech (which shocked Josef Goebbels), and in his book Mein Kampf, he proposed that Germany seize huge quantities of agricultural land from Russia so Germany would be independent in food production. (No German could forget the five years that Germans starved during WWI 1914-19 from food shortages caused by a British naval blockade.)

He also coveted Russian land to grow an enormous population, aiming for 200 million Germans instead of 90 million.

Blond Russian and Ukrainian orphans could be adopted by childless German couples.

Like all Germans, and most Anglo-Saxons also, Hitler viewed Slavs as inferior due to various perceived negative qualities, and this is a fact about the Germans — then and now. I laugh at those who worship Hitler as an infallible god; Stalin, Churchill and Roosevelt were men, so how is it the god Hitler did not defeat mere mortals? 😉

HItler was a very great man with this one great flaw: his view of Russia as something to conquer.

As my massive essay here shows, many Germans were extremely opposed to this goal, and saw the Russians as fellow victims of the Jews who could be an ally only, but never subjugated.

A Belarussian girl – if these Slavs are not Aryan, who is? 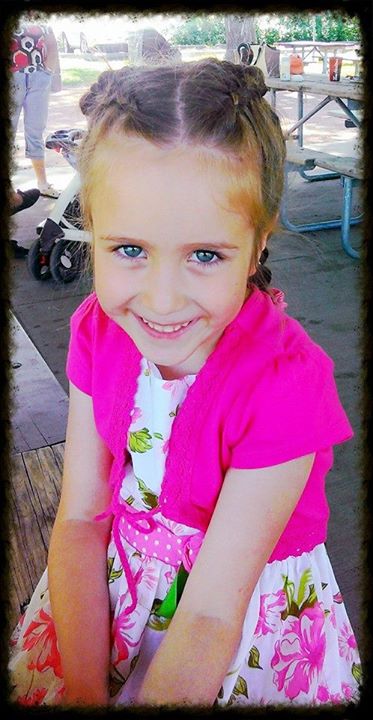 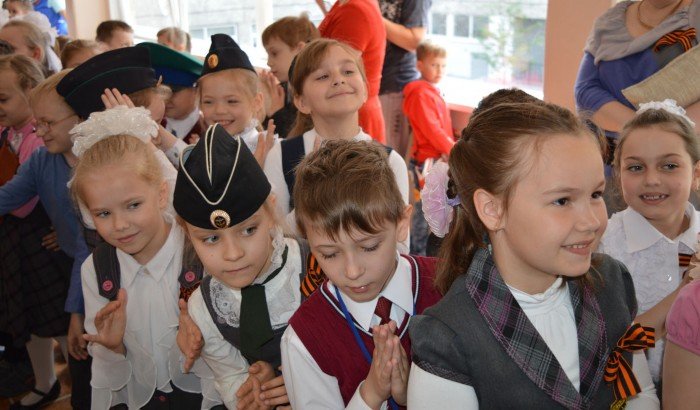 A Russian tank commander in WWII –not blond enough? (from the movie “White Tiger”) 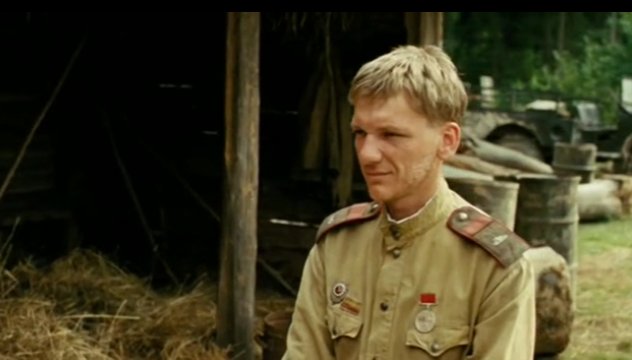 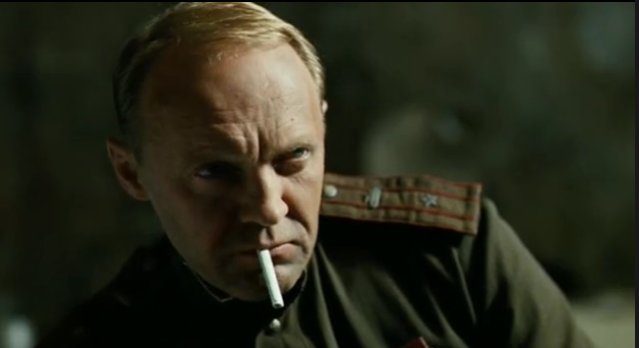 an ad during Soviet times 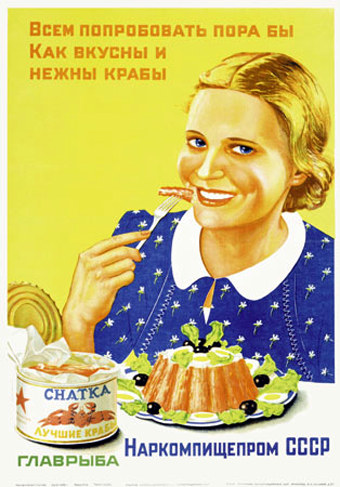 To express my thinking on Russia and other key topics, I did this video: