Voodoo people: Thousands of pilgrims travel to Haitian village to see bullocks sacrificed, toddlers swung upside down and to wash in mud baths

By Matt Hunter For Mailonline

A village in northern Haiti is transformed over two days each July into the spiritual center of the Voodoo religion.

Thousands of Haitians make their way to Plaine-du-Nord for the annual festival, riding for hours in packed buses or on the backs of overloaded motorbikes to celebrate a religion that is an integral part of life for many in the nation.

The pilgrims take ritual baths of mud, light candles and make offerings to the spirits. Voodoo evolved in the 17th century among African slaves and incorporates elements of the Roman Catholic faith that was forced upon them by French colonizers. 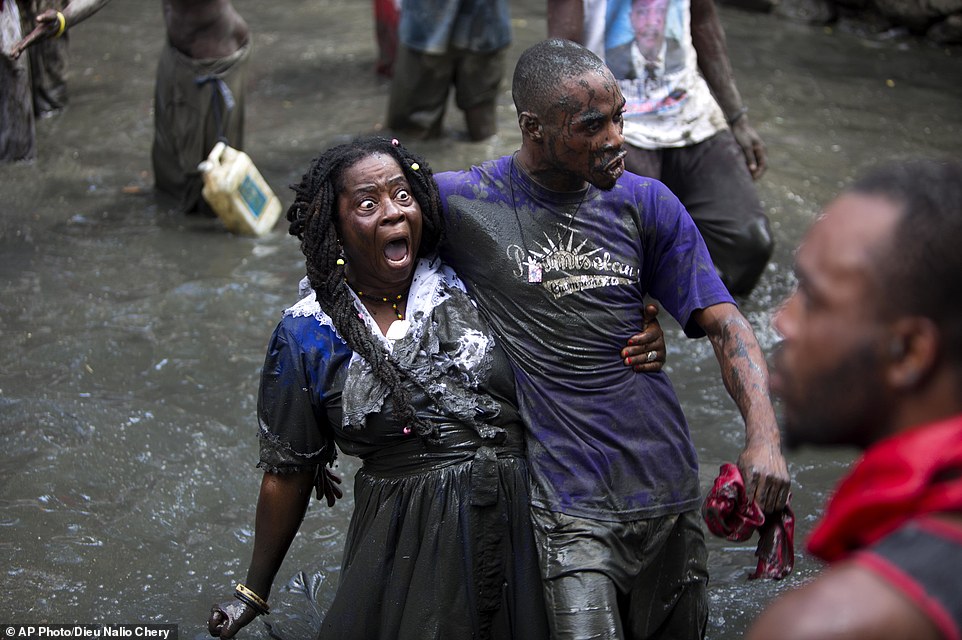 Pilgrims take a bath in a sacred mud pool during the festival. Thousands of Haitians make their way to Plaine-du-Nord for the annual Voodoo celebration 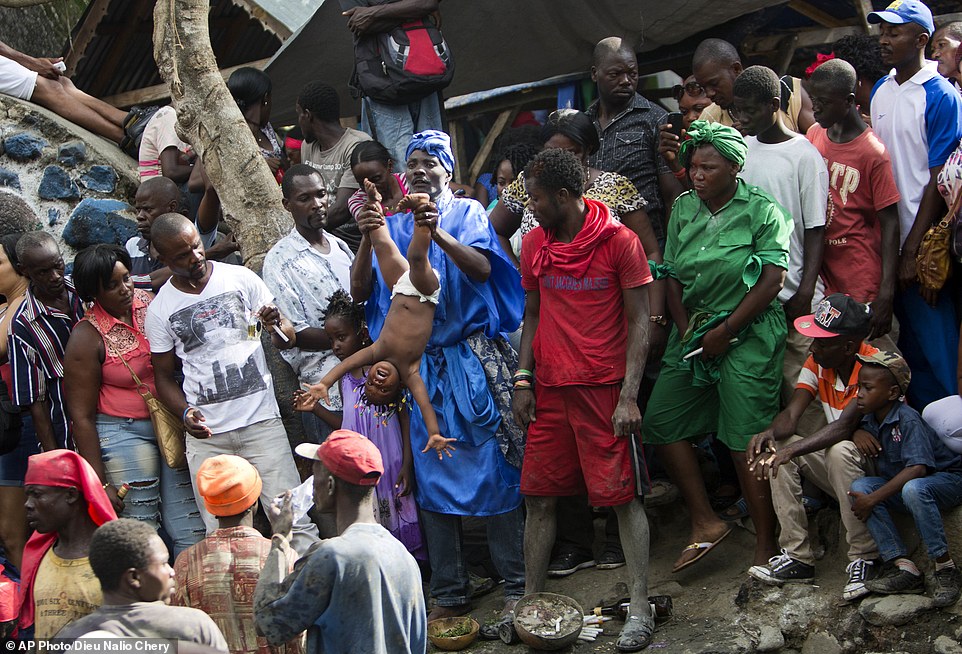 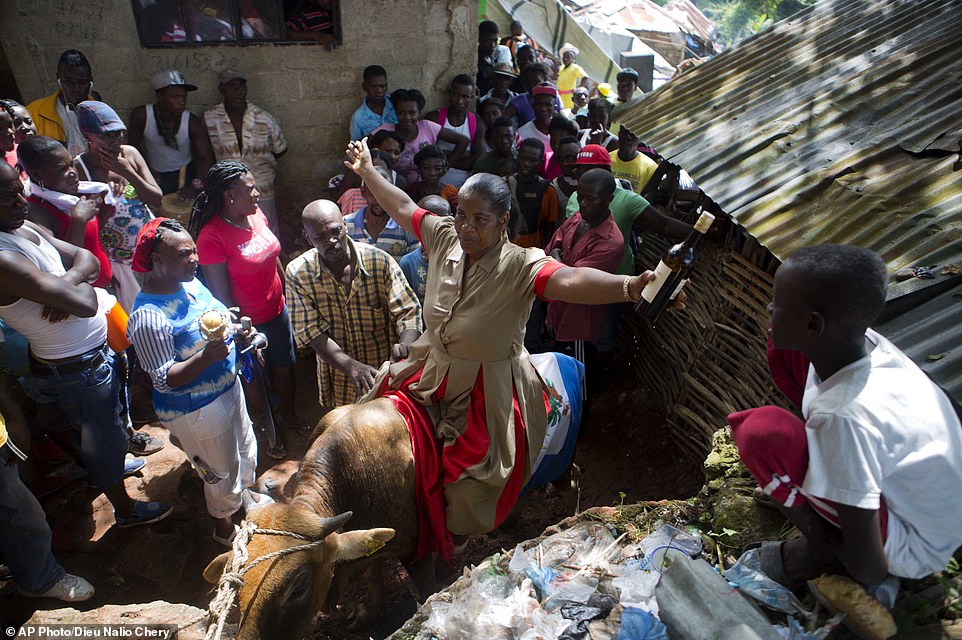 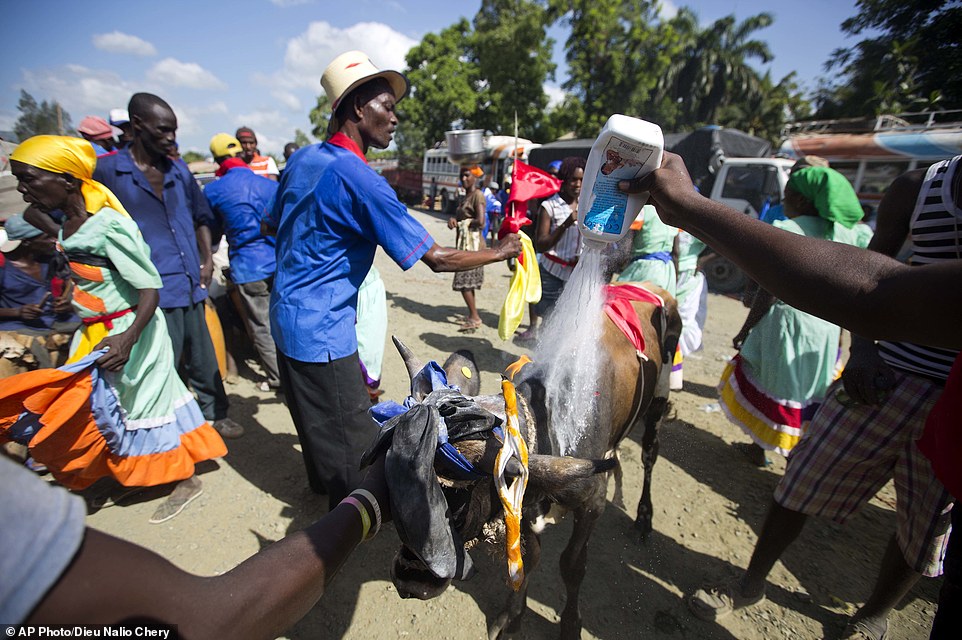 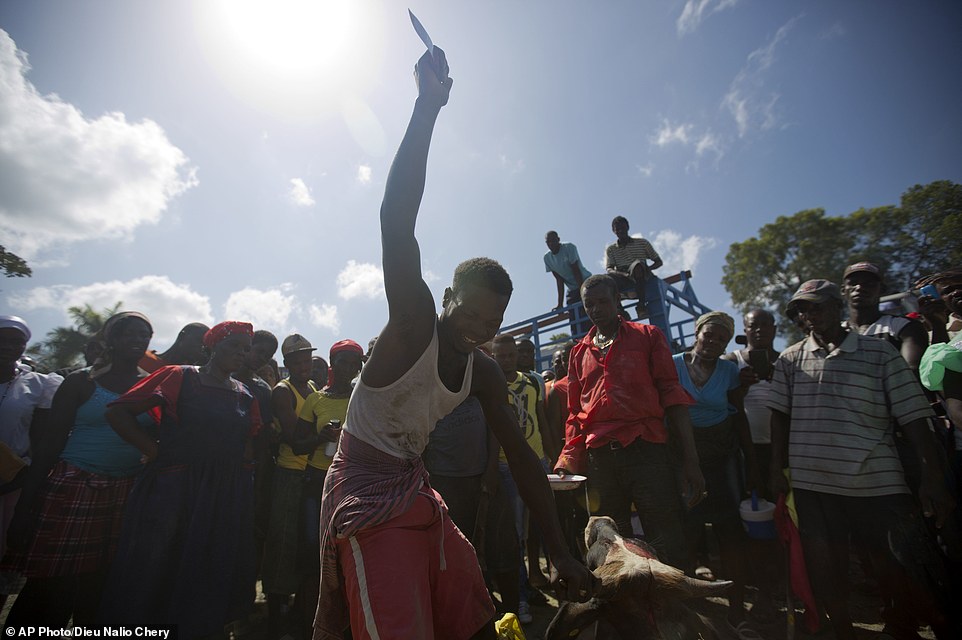 A young man slaughters a bullock in a ritual sacrifice during an annual Voodoo celebration in Plaine-du-Nord, Haiti

At Plaine-du-Nord, people pray and make offerings at the Catholic church of St. James, who is known as Ogoun Feraille and revered by followers of Voodoo.

They then make a three-hour walk to the top of a mountain, near the country’s famed, 19th century Citadel fortress, where St. James is believed to have once appeared.

This is one of two important Voodoo pilgrimages that take place in July in Haiti. The other is held at the cascading waterfalls of Saut d’Eau in central Haiti, where people gather and scrub their bodies with aromatic leaves and soap in a three-day festival.

The faithful also converge on a nearby Catholic church to pray to the Virgin Mary of Mount Carmel, associated in the religion with the Voodoo goddess of Erzulie. 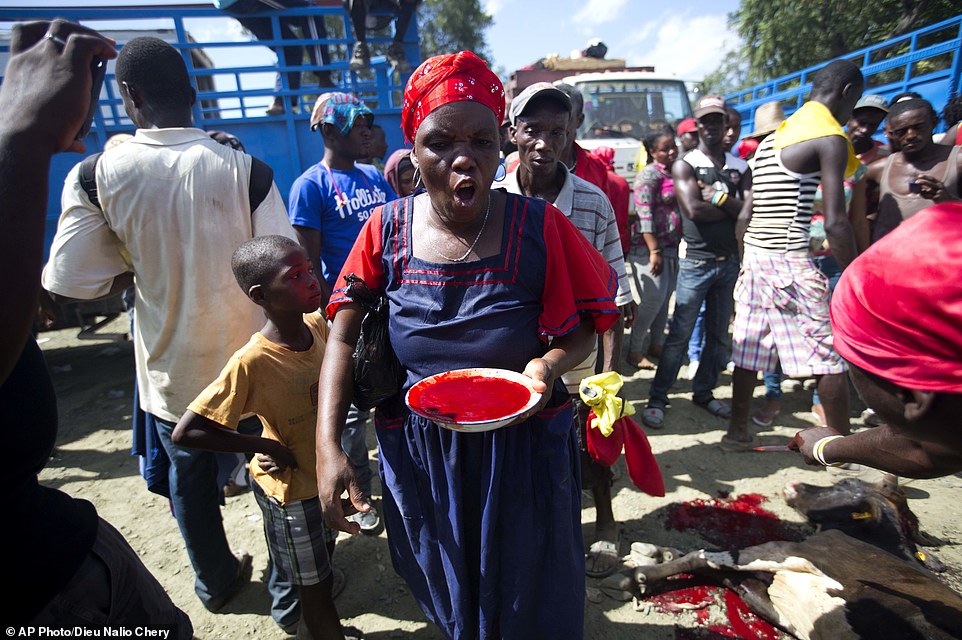 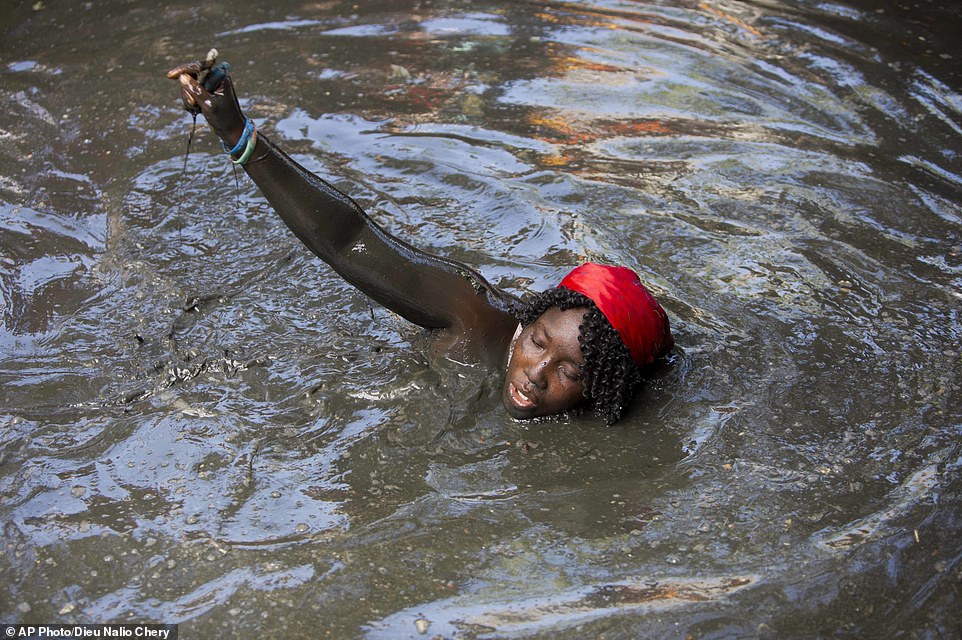 A pilgrim takes a bath in a sacred mud pool during the annual Voodoo celebration in Plaine-du-Nord, Haiti

Some believe these festivals will ease their troubles in a country where hardship is nearly universal. Others make specific requests such as a winning lottery numbers or a cure for an illness. One man came with a list that included a car and a job.

Life in Haiti, where more than half the people are trying to survive on less than $2 a day, has always been difficult, but these are particularly tough times.

The rising U.S. dollar has made high inflation worse and driven up the price of basic goods that were already expensive.

The country is also dealing with another period of political uncertainty, struggling to resolve a political impasse and elect a president after last year’s election was declared invalid because of fraud.

Amid it all, an Associated Press photographer at Plaine-du-Nord on July 23-24 heard one young woman praying for escape from Haiti.

‘In a country where we have no hope in our government, oh St. James, please help me find a visa to leave the country to have a better life,’ she said, weeping as she lit a candle in a bright red and blue dress. 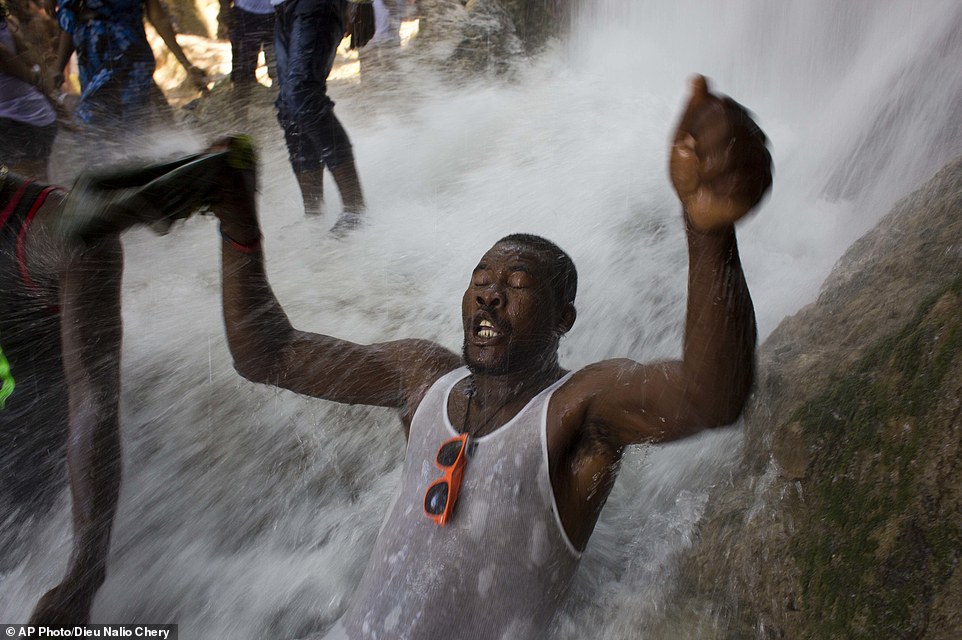 A bather chucks himself into a waterfall during the voodoo festival. Annually, the falls are the site of a large, important religious pilgrimage, during the festival of Our Lady of Carmel, as well as various Voodoo rituals 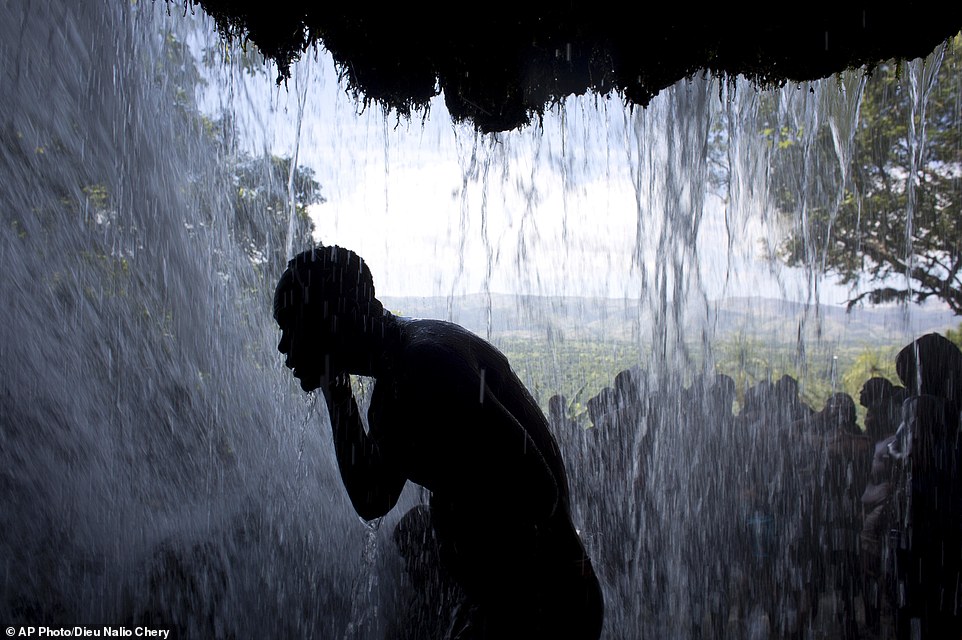 A man bathes in a waterfall believed to have purifying powers during the annual celebration. The area holds cultural significance to both Catholic and Voodoo practitioners 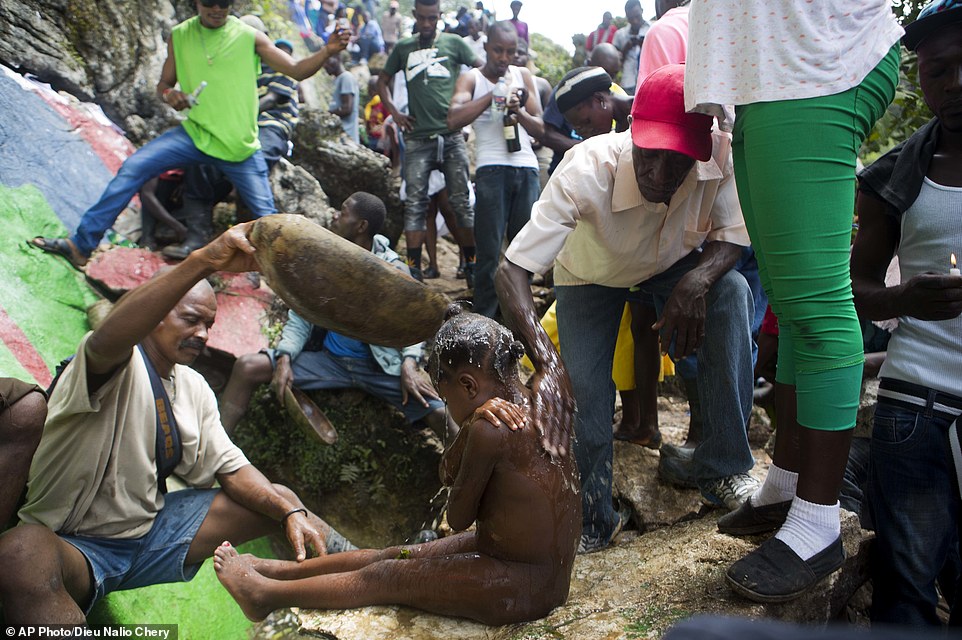 A young girl is bathed by a Voodoo priest with help from her grandfather, right. The pilgrims who trek to Plaine-du-Nord for the annual Voodoo festival take ritual baths of mud, light candles and make offerings to the spirits 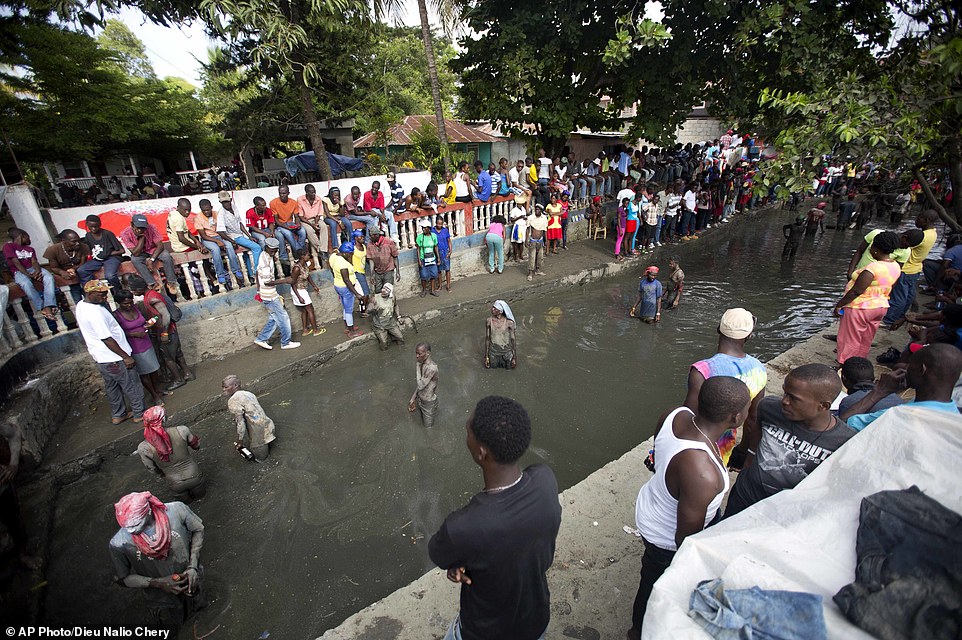 Pilgrims wade in a sacred mud pool as they attend a Voodoo ceremony which people bring flowers, rum, candles, meat and throw them into the mud as offerings 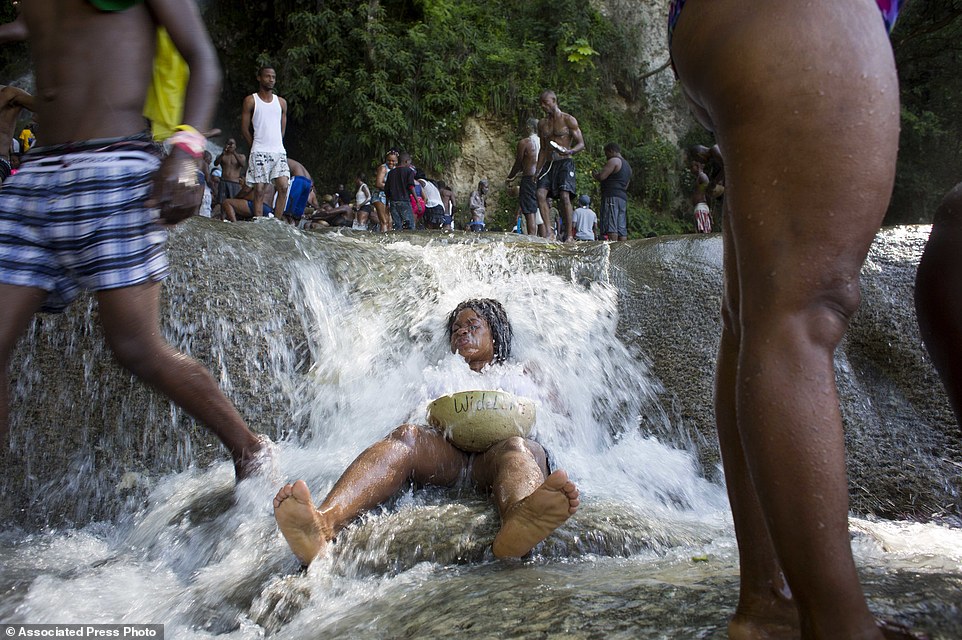 A woman holds a bowl that has her name written on it, as she bathes in a waterfall believed to have purifying powers 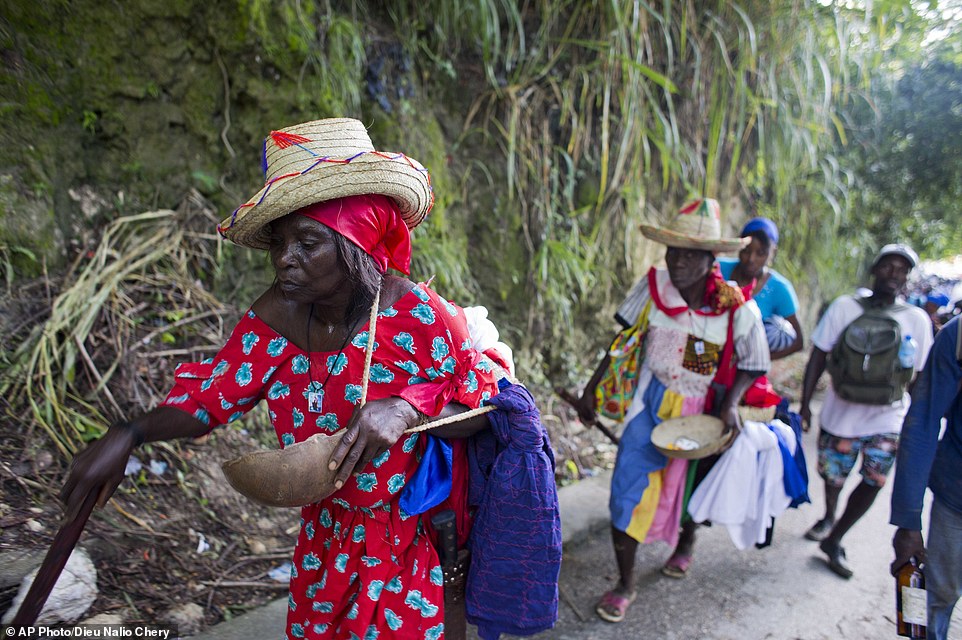 Voodoo pilgrim Dieudone Beauvil, left, and her cousin Jesula Francois, following directly behind, walk from Mirebalais to Saut d’ Eau, Haiti, to bathe in a waterfall 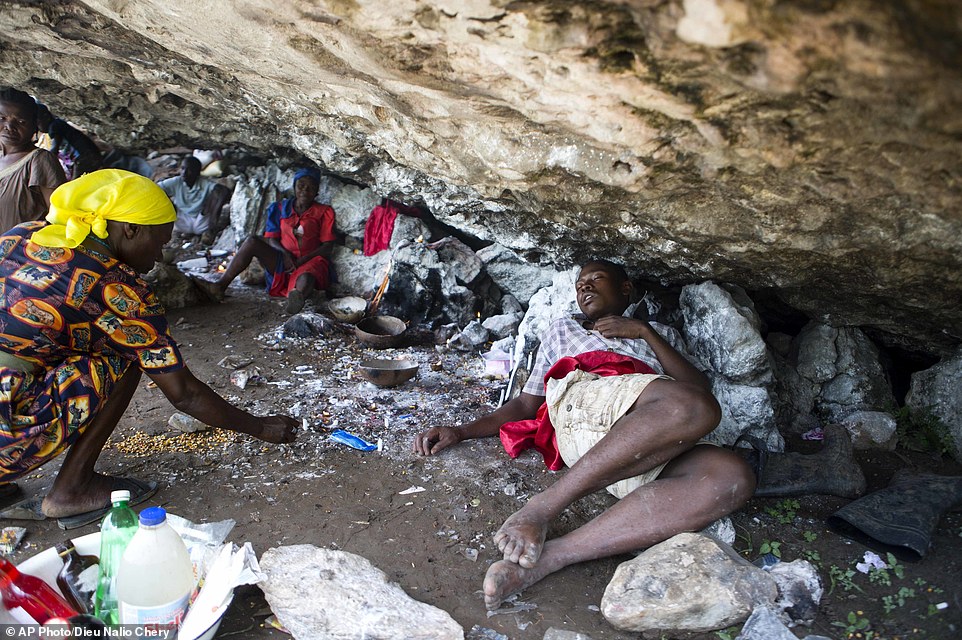 A pilgrim places a candle in a crevice next to a sleeping man in Plaine-du-Nord, Haiti. People pray and make offerings at Plaine-du-Nord’s Catholic church of St. James, who is known as Ogoun Feraille and revered by followers of Voodoo 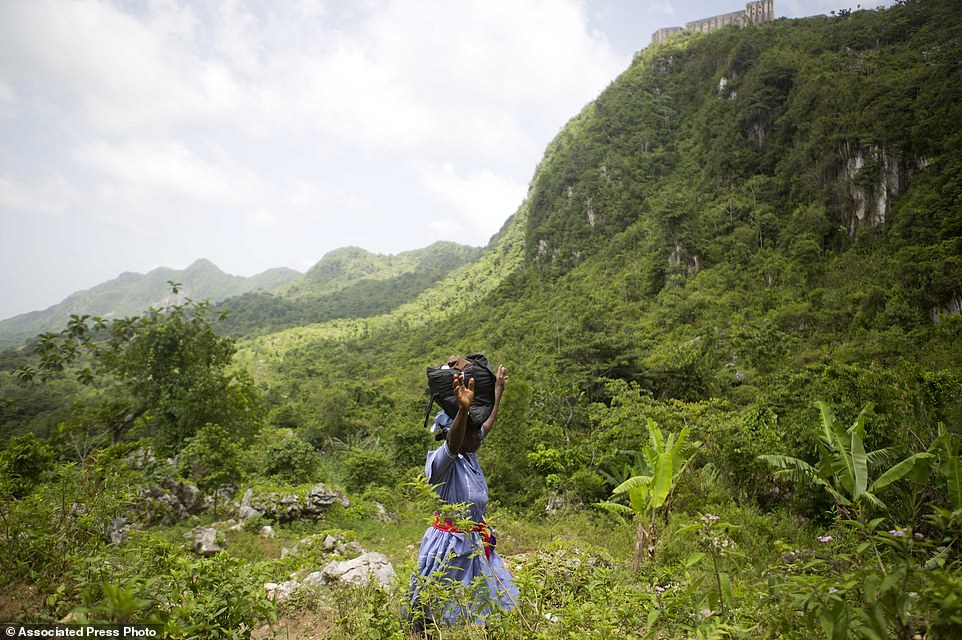 A Voodoo pilgrim prays while she hikes up the mountain in Plaine-du-Nord, Haiti. Voodoo evolved in the 17th century among African slaves and incorporates elements of the Roman Catholic faith that was forced upon them by French colonizers