Here is a video of the artist discussing his motivation:  http://www.youtube.com/watch?v=6VUo8OuFaiI

While one can quibble that some of the leading Founding Fathers were Deists, and thus NOT literally believers in the Bible as history, and likewise for Abraham Lincoln (not one of my heroes), there is no question about their belief in GOD and their reverence for Jesus as a spiritual being sent by God. And they knew that God, morality and wholesome, unfanatical religion were the reasons for America’s Constitution and its freedom.

Here is Dr. David Duke’s EXCELLENT VIDEO on the banning of Christmas:

Trouble is coming, and Americans want to be ready

For decades, White people have fled to the suburbs to avoid minority crime in the big cities, but escaping crime is getting more difficult, and the danger of government-imposed gun control also looms. As we go into the festive Christmas season, Americans aren’t loading up on Christmas presents. They’re buying guns and ammuntion.

The Times of London reports:

“Americans fear recession leads inevitably to more crime, leaving them staring down the barrel of a criminal’s gun Smith & Wesson, the famed American gunmaker once owned by Tomkins, the British conglomerate, expects to nearly double its annual sales in the next three to five years as demand for its firearms soars in the recession. It is not alone. All over America demand for firearms and ammunition is rising amid concerns that rising unemployment, which passed 10 per cent this month, will lead inexorably to higher rates of crime… (and) concerns among gun owners that the Obama Administration may introduce restrictions on gun ownership…”

Frankly, the latter reason is the primary motivator. Americans know that Obama wants a Socialist America, which means even greater taxes on White people so more money will be redistributed to Blacks and Browns. Obama is dangerous to their freedoms. Most White people may not need guns to defend themselves today, but they don’t want to be in a situation where millions of new illegal aliens eventually spread crime to their suburbs, and then the Democrats tell them, they can’t buy guns anymore.

“Smith & Wesson is expecting sales to rise by 30 per cent to $102 million (£61 million) in the first quarter of the next financial year, after growing by more than 13 per cent this year to $335 million. At Sturm and Ruger, sales for the third quarter hit $71.2 million, up 70 per cent from the same period last year. At Glock, the leader in law enforcement markets, pistol sales rose by 71 per cent in the first quarter of the financial year for 2010, in comparison with the same period last year. Even though some experts believe that the gun bubble may be about to burst, with a slowdown in the rate of sales growth, such a view is not shared across the industry. At the Freedom Group, whose brands include Remington, Marlin, Bushmaster and Harrington & Richardson, managers are encouraged by the ‘meaningful percentage of current firearm sales . . . made to first-time gun purchasers, particularly women.’ ”

Americans aren’t as foolish or sheepish as our politicians think. Americans can see what is coming down the pike as we face three more years of Obama with 20 percent employment (or worse). Massive unemployment will cause a rise in crime. There is also a rising tide of anti-government sentiment. Trouble is coming, and Americans want to be ready.

“Rabbi Barenbum“, an illegal Jewish settler on Palestinian West Bank land, gets set on by the TERMINATOR PALESTINIAN DONKEY! 😉

SEND THIS TO YOUR FRIENDS!

Just a few months ago, the brave Lord Moncton was warning us sincerely that the Copenhagen anti-global warming conference would be mis-used to create an UNELECTED “world governance” NWO tyranny.

Then came “ClimateGate,” the hacked release of TWO THOUSAND emails showing scientists fretting because all the SCIENTIFIC evidence is now for global COOLING!

Look now at these pix from Der Spiegel (the major news magazine in Germany). The world conference in Copenhagen, Denmark ended in an embarrassing urban snowfall and no meaningful decisions being taken, because the world public now — THANKS TO THE ARYAN-INVENTED INTERNET — is starting to realize that the sun is cooling off (no sunspots and the world is getting COLDER)!

German puppet chancellor Merkel (who is, typically, fat, lumpy and childless — like many a  German female politician) talks to co-puppets Brown (GB), Obama-rama (US), the French Jew Sarkozy and other marionettes, but no serious action was decided on the mythical global warming and the phenomenally expensive carbon emission taxes that supposedly would stop it. The major German newsmagazine Der Spiegel correctly labeled the conference “Fiasko in Kopenhagen.”

Obama, fresh from getting a Nobel Peace Prize while escalating the war in Afghanistan [!], tells the world it must pay Goldman Sachs for “carbon credits.” No takers.

The conference decided only to “take note” of a report on the discussions. The only dangerous HOT AIR was being emitted on the convention podium to a literally snoring audience.

Third World countries wanted Whitey (almost all the “rich, industrialized countries”) to cough up serious billions for their pockets and Swiss bank accounts in the name of “global warming.”

Even if the world WERE overheating, the Chinese would not care; making money, exporting shoddy goods and dangerous products while undermining Western industrial jobs is their agenda.

Danish prime minister Rasmussen catches some ZZZZZs — and this was the guy hosting and RUNNING  the conference!

Thirty Goldman-Sachs-controlled puppet nations slapped together at the end a “Final Declaration” (here on the floor, being stepped on) — which the delegates refused to adopt and merely “took note of”!

MEANTIME, RECORD SNOW AND COLD AROUND AMERICA AND GERMANY! 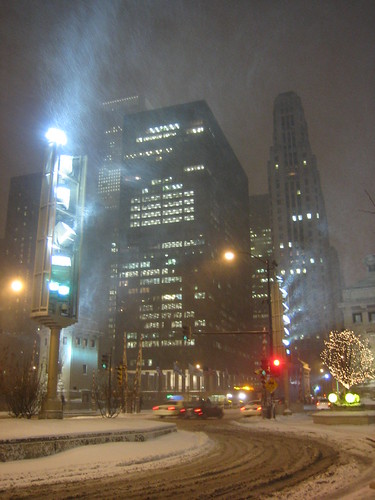 Snow hits Obongo’s Chicago, but the illegal alien from Kenya was shivering here….

Snowstorm dumps on the global-warming-pushing Bilderberg “elite” in Georgetown, the hoity-toity section of Washington DC.

Harz Mountains (no, not the Jew-owned birdseed company ;-))

Frozen-in fishing boats sit at the dock in Rügen (near Denmark). The “old winters,” like the Terminator, are BACK!

Garmisch-Partenkirchen in Bavaria; temperatures plunged to MINUS THIRTY CELSIUS! (-23 Fahrenheit!)

When humans like the Emperor Obongo act with hubris, the gods bring on the nemesis.…..