I believe firmly in a higher intelligence, a tough-love divine person, and that we have souls, and perhaps some of us even have more than one life. A recent poll showed that 25% of Americans believe in this possibility.

I enjoy this video for so many reasons.

Moving on to this life before us, I regret the mistakes made by Adolf Hitler.

1) Dictatorship cannot be a regular way to run a government, only an emergency measure for a specific crisis and limited duration.

2) Hitler was wrong to try to take “lebensraum” (living space) from the Russian people. He could have won the war had he marched into suffering Russia as their liberator from communism.

3) Hitler was far too kind to juze, to the British government and to Mussolini.

Today, the vision is of an Aryan race on the one hand encircled by its enemies as never before — but from that threat comes unity, a coming together to become again a united tribe, as we were in the Solutrean Age, and this time across all the borders of this planet — in the Americas, Europe, Russia, the Pacific and South Africa.

Our prophet is Thomas Jefferson and his vision of liberty as much as it is the folk community and the vision of unity of Adolf Hitler. And it embraces the values of Jesus: shedding the ego, the feuds, the immorality and the selfishness, to serve one’s people. The common good always comes first.

“Greater love hath no man than he who lays down his life for his friends….”

Let us ponder now a weakness of our race — hesitation. As a product of the Ice Age, we had to survive by cooperation, by planning, by respect for the rules. It took many serious, collaborating. careful men to bring down a woolly mammoth. 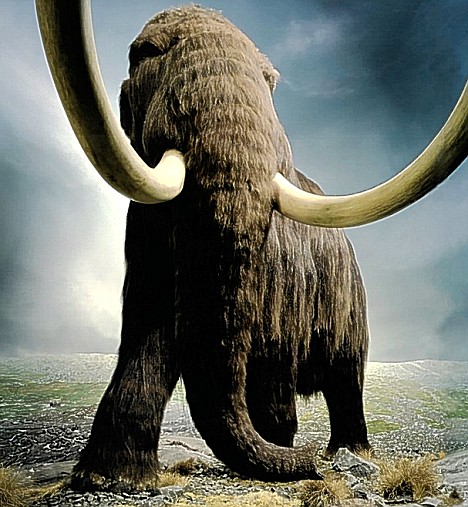 Or the North American cave bear:

Or the North American saber-toothed tiger….

You had to trust your brother hunter, and cooperate, or all would die of wounds — or starvation from an unsuccessful hunt. Only whites who were dutiful, careful and prudent survived.

But these traits can prove fatal in the multiracial environment  into which liberalism has thrust Whites today. We cannot trust the hostile minorities multiplying around us. AND WE CAN NO LONGER HESITATE TO ACT.

Edward de Vere, the Earl of Oxford, was in my eyes, certainly the author of many of the so-called Shakespeare plays, and perhaps his greatest was Hamlet.

Hamlet is the prince of Denmark and heir to the throne the day his kingly father dies.

But suddenly, bewilderingly, everything changes. His father dies, his uncle takes the throne and then marries his mother!

What he as a typical trusting Aryan cannot fathom is the existence of psychopaths — even in his very own family.

When the murdered king’s ghost approaches Hamlet one night atop the castle, and Hamlet learns the awful truth — that his uncle has murdered his own brother, Hamlet’s father, by poison as he slept, and seized the throne — and by implication such a fiend could poison Hamlet too one day —  or one night….

— then comes the awful realization by Hamlet that he must do something, either to his uncle or to himself, for he cannot live silently with this monstrous crime.

But, being a Northern European, whose Ice Age blood says “do not act impulsively, and plan carefully what you must do!” Hamlet …… hesitates.

Here is Mel Gibson as Hamlet, uttering perhaps the most famous lines in the English language:

Now I will repeat that Highwayman video, and then comment on us, on Prince Hamlet, and what he shows about our race:

I was so tired I put on my Marine Eagle, Globe and Anchor backward, but that’s the state of our country, backward.