Possibly one of the most damning indictments of the allegations surrounding the Holocaust and Nazi racial policy, come in an analysis of Germans of part- Jewish descent who were not only ardent National socialists but who faithfully served the NS state at all levels in its military structure. For if the NS state had, as is so often claimed, been hell-bent on killing all traces of Jews, it would never have allowed these individuals into positions which they did hold – including army and air force generals.
.
As discussed earlier, the NS racial laws made specific allowances for such exceptions, and in fact actively sought to assimilate partial Jews into German society, rather than have them re-congregate and form pure Jewish gene pools once again. From the NS side, there was therefore no contradiction between the assimilation of part Jews into German society, although this policy is subject to considerable misunderstanding from outside observers.
. 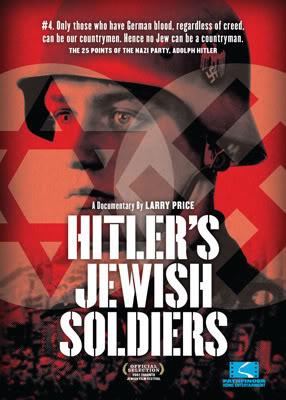 As discussed in the book by American Military University professor Bryan Mark Rigg in his book “Hitler’s Jewish Soldiers, The Untold Story of Nazi Racial Laws and Men of Jewish Descent in the German Military” (University Press of Kansas, Modern War Studies, May 2002) as many as 150,000 men of part Jewish descent, including decorated veterans and high-ranking officers, even generals and admirals, fought for NS Germany right to the bitter end.
.
Almost all of these 150,000 men received special exemptions and declarations of being “true Germans”,many of these orders being signed by Adolf Hitler himself, in a legal provision known as theDeutschblï¿½tigkeitserklï¿½rung (or literally, the Declaration of German Blood).

Above: Photographs of Wehrmacht soldier and half-Jew Anton Mayer, typical of those which accompanied an application for exemption under the Nazis’ racial laws.

Above left: Half-Jew Colonel Walter H. Hollaender, decorated with the Knight’s Cross (Ritterkreuz) and German-Cross in Gold; and above right: Half-Jew Wehrmacht soldier Werner Goldberg.
.
“KNOWING THE NS STATE FOR WHAT IT WAS”
.
The significance of these Germans of Jewish descent serving the Third Reich has not been lost on the academic world: for example, the following quote from historian John Keegan in his review of Bryan Mark Rigg’s book:

“The revelation that Germans of Jewish blood, knowing the Nazi regime for what it was, served Hitler as uniformed members of his armed forces must come as a profound shock. It will surprise even professional historians of the Nazi years.”Â – John Keegan,author of The Face of Battle and The Second World War,(http://www.kansaspress.ku.edu/righit.html)

Keegan is of course, mistaken in the one sense, in that even a cursory study of NS racial laws will have revealed that the Blood Protection Law of 1935 make specific allowances for such cases, and only the general hysteria and ignorance of what the National Socialistsactually said and did has allowed people to be “shocked” by the large number of part Jews serving the Reich.
.
The phrase “knowing the Nazi regime for what it was” above by Keegan, is however the real significant part: for indeed, if the NS regime really had been about mass-murdering, gassing and burning millions of Jews, it is extremely unlikely that these 150,000 prominent Germans of part-Jewish descent, would have served the Reich at all, never mind having made specific application to be granted full Aryan status – especially given that there were only approximately 600,000 full blooded Jews in NS Germany (about two million if one counts part-Jews).
.
As I wrote in German (translation into English follows):
.

..Rasse ist viel, aber nicht alles/Race is a lot, but not everything

Melitta Schiller was born in 1903 in the then-German province of Posen in the town ofKrotoschin. Her father came from a Jewish fur-wholesaler family, which had its seat in the Odessa, Ukraine area. Before the First World War he converted to the Protestant faith, then enlisted voluntarily in 1914 in the German Reichswehr and rose to become an officer, a captain, and receive the Iron Cross. 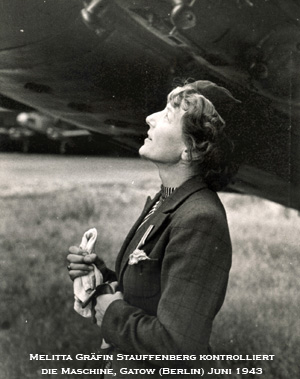 In 1929 Melitta began to take flying lessons and earned flight licenses for allaircraft types, including even seaplanes, as well as the stunt-flying license “K.2.”

In 1937 she earned the rank of Flugkapitaen [air captain]., In 1938, inÂ England, Â together with the aviatrix Elly Beinhorn, she represented the National SocialistFlying Corps. 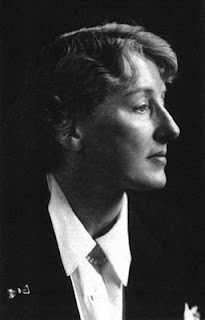 After the outbreak of the Second World War Melitta,Â Countess Schenk von Stauffenberg was ordered to thetest site of the Luftwaffe [Air Force]. By 1942, she hadalready performed on test planes 900 measured andfilmed dive-bombing runs, mostly from 1,000-5,000 meters altitude [3-5k feet]. In February 1943, she became the fourth German woman to be awarded the Iron Cross and shortly thereafter, upon completing her1,500th dive-bombing run, the Pilots Badge in Gold with Diamonds. 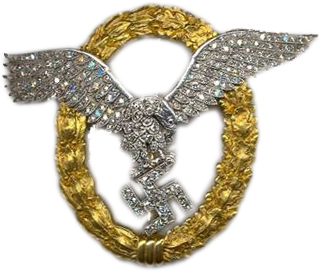 On April 8, 1945, she was transferring in a small, unarmed aircraft to a new duty station andÂ was shot down by an American fighter plane near Straubing, Bavaria. The Luftwaffe buried her with full military honors. 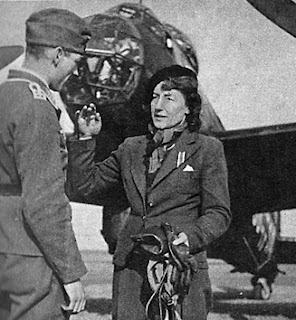 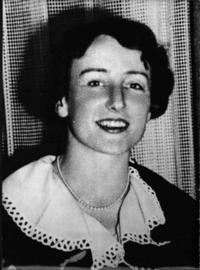 So here was a half-Jewess fighting and giving her life for national socialism and then we see full whites who spend their time gossiping and attacking me, their own comrade in mid-battle with the mortal jew enemy!