…..Massacre down the memory hole

As the aircraft cruised at 22,000Â ft over the California coast, the cockpit voice recorderÂ of the relatively small planeÂ recorded the sound of someone entering, and then exiting the lavatory. The timing of the lavatory door sounds, Burke’s seating proximity to Thomson, and the two quick gun shots heard just after theÂ 2nd door closing sound,Â suggest that Burke entered the lavatory in order to discreetly draw hisÂ gun. The captain and the co-pilot were speaking to air traffic control when the Cockpit Voice Recorder (CVR) picked up the sound of the first two shots being fired.

The most plausible theory as to what happened was deduced from the pattern and audible volume of the shots on the CVR. It appears that Burke first shot Thomson twice. Though Thomson’s own seat was never recovered,Â part of a serial numbered seat that was identified from the wreckage as being directly behind Thomson’s was found to have two bullet holes in it. Due to the power of the Magnum .44, the bullets must have traveled through Thomson’s body, his seat, and then through the seat behind.

The co-pilot immediately reported that a gun had been fired and no further transmissions were received from the crew. At that point, the CVR recorded the cockpit door opening and a female flight attendant telling the pilots, “We have a problem!” The captain replied, “What kind of problem?” A shot was heard as Burke shot the flight attendant dead, and announced “I’m the problem.” He then fired two more rounds. Most likely, he shot the pilot and copilot once each, incapacitating or killing them on the spot. Several seconds later, the CVR picked up increasing windscreen noise as the airplane pitched sharply downward and accelerated. The remains of the flight data recorder (FDR) indicated Burke had pushed the control column forward into a dive.

David Burke was born May 18, 1952, to Jamaican parents living in Britain. He was, as you can see, Black.

If you are a regular reader, you should know by now where your author is going with this. Is it really even necessary at this point to ask the question, “Why was this developing story suddenly spiked and then buried for eternity?”
.
After spending 2 days as one of the front page stories of the New York Times, (December 8 & 9), the story dropped down to page A-28 as soon as it was learned who the shooter-hijacker actually was (December 11). Burke’s photo was never published. By the following day, the historic mass murder drama was gone from Sulzberger’s Times, and the TV media, altogether.

The San Bernardino County Times (a small local paper) offered an honest glimpse into Burke’s animosity towards White people (which all, or nearly all, of the passengers certainly were). From its December 12, 1987 issue:

“Burke, who was black, had alleged to state authorities long before he was fired that Thomson had passed him over for promotion because of race.”

“On July 15, Burke went to the state Department of Fair Employment and Housing and said he had been passed over twice for promotion to customer service supervisor. Burke alleged white workers with less experience were promoted to the supervisory positions he deserved, said Annabella Hwa, the department’s district manager in Los Angeles. Burke, although investigated several times for alleged drug involvement and auto theft in New-York, was never charged.” (here)

You see, inÂ the warped mind of the racist-bigot David Burke, being passed over for a promotion couldn’t possibly have had anything to do with company suspicions that he may have once been involved with a Jamaican drug-smuggling ring, or that he was clearly a troubled head-case. No. It was “racism” that got White people promoted over him. Of course! And it was “racism” that got him fired after he was caught stealing money- on camera!

David Burke was a violent abusive man who fathered 7 children out of wedlock with multiple “baby mommas”. And, make no mistake, he hated White people. We can imagine the great delight which Burke took in blowing that White Flight Attendant’s brains out, just after offing Mr. Thomson, and just before blasting the White pilots. 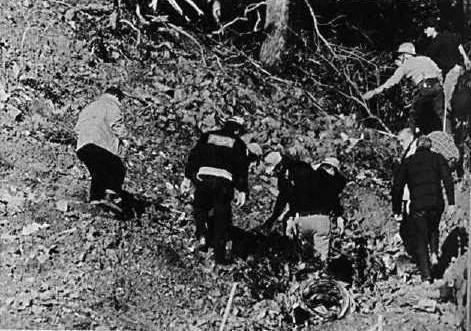 Full Story: Murder Suicide on Airplane Kills 43
*****************
Yes, Sulzberger. Let’s have that “national conversation” about race and about “hate crimes”. We can start with David Burke.

….Yes, there are plenty of other black serial killers and mass murderers

I appreciate your posts — but the reason we have no gigantic white civil rights organization to cry BULLSHIT over this Charleston crisis is all white activists are financially starving or broke. (Andrew Anglin has tens of thousands of readers but has to teach English in Asia to Asians, for Pete’s sake!) If you do not donate money or services to 1) me (www.johndenugent.us), 2) Mike Delaney (www.trutube.tv), Anglin (www.dailystormer.com) or the Rebel (www.therebel.is), pls do not post on my FB page. That has been my policy for weeks now. We nearly lost three of these four sites end of last month due to no donations.– despite tens of thousands of readers. That is ridiculous. Every video you watch, and every blog you read, was created by someone who has bills. WE NEED FULL-TIME ACTIVISTS. The ADL has 1,600 paid employees because Jews donate! Everyone can donate …one …dollar, euro or pound. 🙂