On December 2nd, the French Parliament passed a resolution asking that France recognize a Palestinian state. And just a week ago, Israel informed France that it was “deeply disappointed” with France’s vote on a UN resolution that would have required Israeli forces to withdraw to their pre-1967 borders by 2017.

With France taking measures decisively sympathetic to Islam, why would Muslim zealots suddenly choose THIS MOMENT to murder a dozen French citizens, an act that would turn French public opinion against Muslims and in favor of Israel?

Clearly, the beneficiary of the Charlie Hebdo incident is neither France nor Islam, but Israel (which, with the US, also objects to France calling for an end to the crippling economic sanctions against Russia!)

There is no question that Islam is a VERY grave threat to white survival. This video makes the point very well, though its perspective is religious and Christian, not racial and western.

Muslims desecrate Christian graves, supposedly in Libya:
Post by Blaine Cooper.
.
.
But I have been a WN for 36 years now (http://johndenugent.com/wn-biography-of-jdn/), I know how the Jews work, and I have also lived in France 2004-05, I encountered both French Jews and many French Arabs,  was married 2002-05 to a Frenchwoman,  and I used to see the magazine Charlie Hebdo, which was full of vulgar and Jewy humor about sex, body functions, and constantly against Christianity and Islam and very seldom made fun of Judaism.

I just did a copy and paste of a fantastic blog in French on the Charlie Hebod shooting, now that more has come out.

–”Charlie” is an anagram of “Israel” in Hebrew:

–One killer left his French official ID card in the black Citroen… how sloppy of an Al Qaeda, and obviously professional hitman! 😉

.
I can also tell you this: there are six hundrd thousand Jews in France, the biggest Jewish community in Europe, and most of them are dark-complected, sephardic Jews who can easily pass for Arabs. (In Israel they are used to infiltrate Palestinian communities and groups for this reason — that they speak Arabic and look Arabic!)
.
This Israeli officer (and in fact all of his soldiers that I can see) who is assaulting a peaceful, blond Danish protestor with a rifle to the face looks sephardic:
.
https://www.youtube.com/watch?v=dEQSs3Y2lgE
.
By contrast, the Israeli elite is Ashkenazi (Eaastern European) and has a lot of white, Slavic blood, such as Tzipi Livni:
. 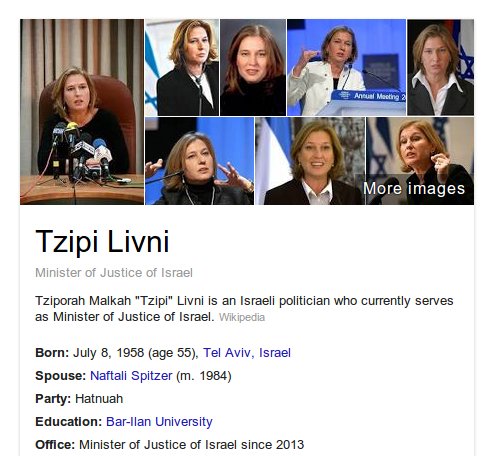 .
Obviously, they cannot pass as Arabs.
.
1) The killers spoke perfect French (because IMO they were French Jews who had moved to Israel);I knew quite a few French Arabs in the Marseilles/Aix-en-Provence area) and they all spoke French with a thick Arabic accent….and why not? They are around their fellow Arab immigrants all the time; the country is at least 10% Arab now; mosques and halal (= muslim-kosher) grocery stores are everywhere. 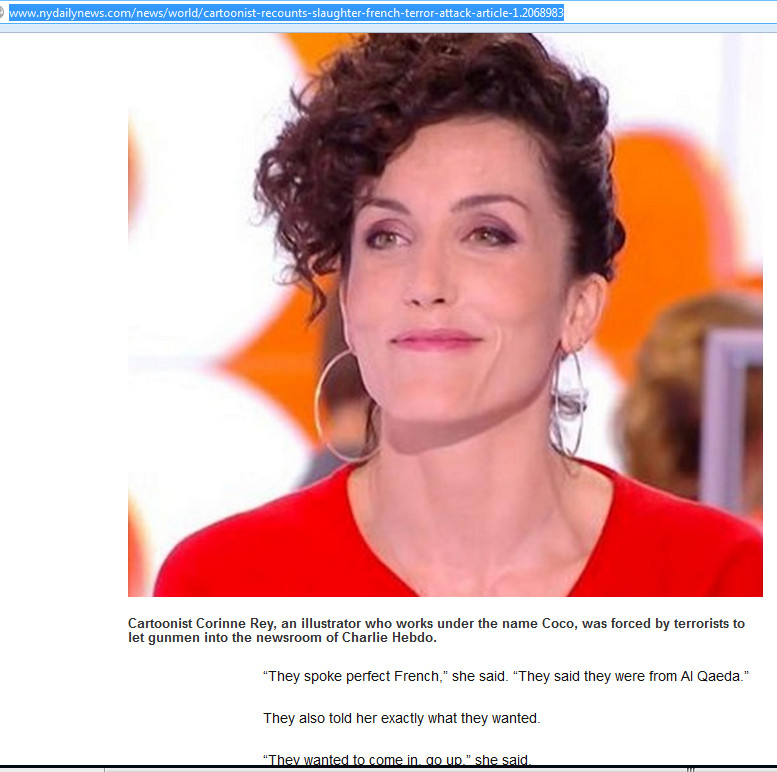 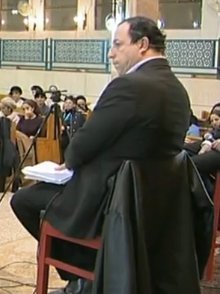 .
2) The “execution of the cop on the sidewalk” was doubly bogus:
-a) white smoke out of rifle barrel = blanks,
-b) the body did not twitch when the head shot was delivered.
What is also suspicious is that now they are blurring the details of this…..
https://www.youtube.com/watch?v=7ykZhXKYb8A 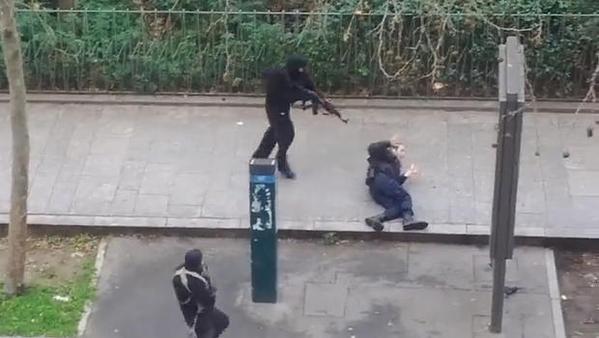 .
In a real head shot the body, the nervous system, makes a reflexive contraction. Look at the ISIS bastards executing captives. Every shot = the body twitches.

Bogus, bogus, bogus.
No matter whom they now arrest, it will likely be two or three MK-ULTRA victims, maybe Arabs, and total patsies, or it will be French sephardic Jews posing as Arabs (they look identical), who after being sentenced to French prison will be moved around the prison system, then disappear and reappear under other names in Israhell.
The real perpetrators (if anyone was killed at all) got away and they’ve stitched some MK-ULTRA patsies up big time, as so often before…..Boston Bombing, Denver cinema shooting, Bobby Kennedy murder with Sirhan Sirhan, etc,
Why wouldn’t they fake this also? And the Jews have 2,500 years of experience as professional con men.

The final bust: I thought the police officer shooting scene (the only shooting scene of any substance) was too perfect to not be staged. Now forum reader NT1 sewed it up nicely – moving markers, cue points, botched sound track, everything that could possibly be wrong if you only knew what to look for. Shooting was done in two or more Hollywood style takes that were edited together – all the proof is here:

NT1 posted the following to the forum:

I was unfortunate enough to see a film clip from the Biafran war on a late-night, BBC programme presented by Ludovic Kennedy many years ago. The victim had been stripped and was lying bound, begging for his life. A shot from off-screen silenced his pleas as his head and upper body were shifted violently due to energy absorption from the bullet. Another shot a second or so later produced the same head and body movement but by that time the man was dead. Shortly afterwards, the soldier who had shot him strolled into view, with a look of extreme satisfaction on his face. This was before the days of modern high-velocity weapons but illustrated all too clearly that the kinetic energy from a bullet has to go somewhere. There was no such movement on the policeman’s head and body during the attack and I have to agree with Stephan at Post #94 that the smoke emission appears to emerge from his hand.

However, that is not the only anomaly in this video, which appears to have been made in two takes. The video on the Liveleak site:

http://www.liveleak.com/view?i=bc6_1420632668 is the best version for this but the video linked at Post #97 is the next best. My comments are made with respect to the Liveleak video. You need to watch it in Hi Res (720). Someone needs to download that video before it disappears.

At the beginning, we see the two gunmen who have just emerged from their car – it would be even better if we had seen them driving up and stopping. Anyway, note that their car has stopped astride a black line drawn in the road. These are the clues you have to look for and, if you have read about the Woolwich ‘murder’ of Lee Rigby, especially the excellent, in-depth analyses by Chris Spivey: http://www.chrisspivey.org you will know what to expect. For the moment I’ll just concentrate on the main part of the action but just try to think of a reason why the trainer has been placed carefully in the road when, as you can see from the rest of the video, both men are still wearing boots.

The right hand gunman (looking at the video) disappears behind the van and the sound of shots is heard. The first three are presumably from one gun and the following five are supposed to be from another. There is far too much echo and there seems to be too much low-frequency content. This action is taking place with a park area in the background, with nothing to reflect the sound – not in a canyon. After this the camera tracks to the right and we see the policeman just finishing falling to the ground, facing in the direction of his attackers. This is not the right direction for the smoke effect.

The policeman then goes out of shot (no pun intended) as the camera tracks left, waiting for the men to appear. As it follows the men, the policeman comes into view but has totally changed position and is now facing away from his attackers – but further to the left and looking over his shoulder to see where they are. He seems to synchronise his head turn-back with the progress of the man on the pathway. The ‘fatal’ shot is fired, with no apparent effect on the body and the shooter moves back into the road to join his companion. Both run back to the car – but something has changed. When we saw the car at the beginning, it was astride a black line. On their return, another line has appeared in the road at right angles to the first and facing out from the left-hand front wheel (looking at the video). How did that get there?

No one is going to walk out into the road to mark the position of the car when there are two rampaging gunman in the area. We have to assume that it was necessary to retake part of the action and the line was added to enable the car to stop in exactly the same place before the scene was repeated. The view we see is not the only view that would have been taken at that time.

There is also a short black line in the road by the front wheel of the nearest rental van. If you now look carefully through the footage again, you should be able to see various cue marks in the road and on the pathway. Note the two white marks level with the front of the car between the rental vans, for example. Can you see the white mark at the base of the vegetation, roughly in line with where the policeman collapsed after being ‘shot’ the first time? Note the two black dots on the pathway where the policeman fell initially but became exposed when he turned over and moved to the left. Look at the white dot on the pathway, just to the left of the green pillar and check the timing of the shot as the gunman passes it.

There seem to be other marks at various points. See if you can find them. There should be much more for this video to reveal and more questions to be asked.