Dearest Comrade Carlos Porter [the troll whom the Jews at Google put at the top of page one, because you call me a con artist and lunatic],

Now here you live in the European Union, where our comrades go to jail for the mildest racial observations, and yet you, out of all the comrades, get away — over and over and over again — with doing posts using the epithet “nigger.”

Now, just why is that, Carlos Porter? I have asked before and I repeat my question:

Are you allowed to post the word “nigger” (and even on Andrew Anglin’s major WN site, which is under ADL and EU surveillance and just lost Paypal and Dreamhost hosting), because you agreed to attack and defame me? Is this your get-out-of-jail card?

I got this email notice regarding an Anglin blog on which I had posted:

A June 2014 post on your blog blasting me for wanting a black-white alliance against the Jews:

Four uses of the word nigger and once “niggerbridge”: Why has nobody arrested you, Carlos?

I have blasted black atrocities against whites for literally decades, and called for white power. I did so in 1978, on my college campus at Georgetown. 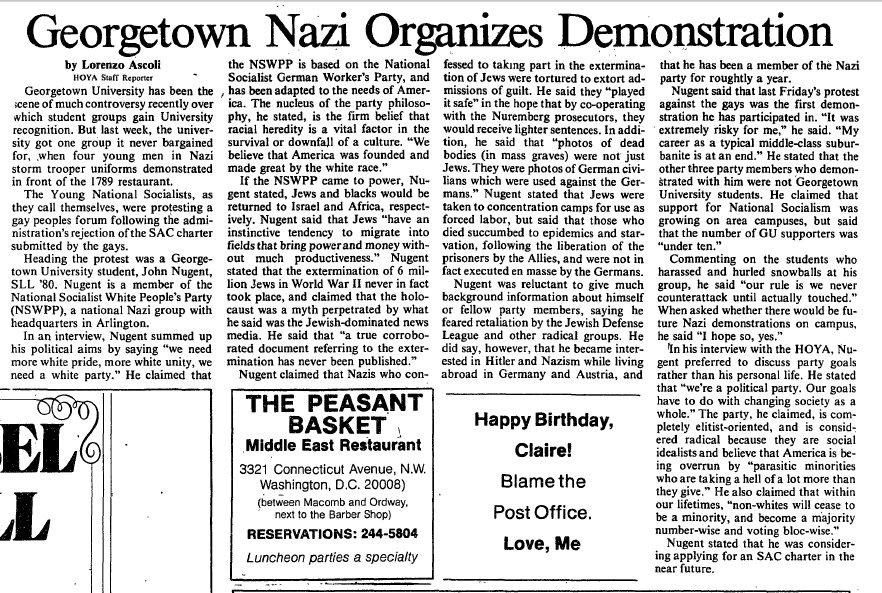 But YOU want the Blacks to keep siding with the Jews.  The Boers thank you, Carlos.

No way we want the Blacks to rebel against the Jews. They need to kill more Whitey, right, Carlos?

And I repeat my question:

WHY are you the only WN in Europe who can post the word “nigger” to your heart’s content, on major websites, and never be arrested?

—– Forwarded Message —–
From: Daily Stormer <goodday.andre@gmail.com>
To: john_denugent@yahoo.com
Sent: Friday, 12 December 2014, 13:32
Subject: There is a new comment to Young White Girl Burned Alive From the Inside Out in Black Infested Area

These brave Britain First comrades are being arrested and hauled off to jail for far less. All they do is oppose pedophilia in Rotherham and muslim gang rape, never using one racial epithet, and they are hauled away….. The leader is facing trial on in January and the second-in-command, Jayda Fransen, has been repeatedly arrested as well, on charges of “hate” because they object to muslim rapists and pedophiles roaming the streets of Britain free! Imagine if they used the word “nigger”! Britain would reinstate the death penalty for that!

Britain First has released a shocking video showing the police brutality and aggression used against our activists, and contrasts it with the way they treat ISIS-supporting Muslim extremists – it is a real “eye opener”.

This is a “must watch” video.

Please click below and watch this video then read the message below:

The persecution and sabotage of our movement is proceeding with increased intensity.

The latest outrage is the sudden and scandalous closure of our YouTube account, containing up to 50 videos and reaching hundreds of thousands of people worldwide.

Then, to top the multiple arrests I have faced for combating Islamic extremism, our deputy leader, Jayda Fransen, confronts hate preacher and terrorist manufacturer Anjem Choudary and finds herself arrested too.

By all accounts Jayda was assaulted, pushed, verbally abused and manhandled by the Muslim extremists but managed to get in Choudary’s face and tell him he’s not welcome, before the police grabbed her and took her away to a stinking cell.

Unlike other political parties, we are facing a persistent barrage of police, local authority and media hostility.

We are also receiving credible intelligence that none less than the Home Secretary has had emergency meetings with “anti-fascist” groups to discuss how to combat the inexorable rise of Britain First.

Here is some of the sabotage and hostility we have faced recently:

– I have been arrested no less than 5 times this year and have also been pulled in for questioning on a further occasion.

– I am currently the subject of two separate investigations and have a trial coming up on January 5th in which I could be sent to prison.

– Several of these arrests have seen the involvement of “SO15 Counter Terrorism Command”.

– Our offices have been raided and equipment seized and taken away, including such innocuous items as dongels and office phones, all intended to shut us down.

– Our website is subjected constantly to intense and worsening cyber terrorist attacks.

– In the last 6 weeks, two of our HQ office addresses have been closed down.

– Several of our high ranking leadership officials have been subjected to unwarranted and un-welcome visits by Special Branch officials.

– Our leadership officials have received thousands of serious death threats.

– Various media outlets have thrown money at our activists to get them to turncoat and betray us.

– We have had various meeting venues closed down, culminating last week in our Conference being forcibly closed down by the police half way through.

– Local authorities have cancelled bookings illegally just days before the event not leaving us enough time to drag them into court.

– Government agencies such as the Cabinet Office and the phoney Advertising Standards Agency are intent on causing us problems and using taxpayers’ money to hinder our progress.

– The Met police has leaked details of its “investigations” to journalists before we have even been informed.

– The Royal Mail, contrary to electoral law, refuses to distribute our election literature.

– When we have taken to the streets during legal democratic activities the police have blocked our routes and subjected our activists to violence and aggression.

I am afraid to say, that unless we start fighting back against this sabotage and bias we may as well “hang up our hat” and throw in the towel.

Behind the scenes, we are feverishly working out strategies and new tactics to overcome the increasing number of obstacles the police and politicians throw in our way.

The police brutality and bias towards our activists in particular is becoming insufferable.

I would not be doing my job if I do not ask for your help as a dedicated Britain First supporter.

Now is the time that we fight back both legally and intelligently to secure our democratic rights and entitlements.

If you don’t help our sacred and noble Cause, then the “Establishment” will continue to trample all over us.

Our children and grand-children and the unborn millions of Britannia are depending on us to make a stand against those traitors who would deprive them of their future.

Yes, the increasing attacks and pressure shows we are hitting the “Big Time” and are frightening the traitors in the corridors of power, but they will win, pure and simple, unless we stop showing restraint and make a determined stand.

If we don’t make plans right now, we will continue to be walked all over.

We need to take urgent action now, before it’s too late.

I am appealing to you my fellow patriot, to help our movement today.

Without you, nothing can be done and we will “hit a wall” and make no further progress.

I need all genuine and sincere patriots to “step up to the mark” and chip in with contributions of £50, £30, £20 and £10 – whatever you can chip in, please take action right now.

I would like to thank you in advance for your generosity and commitment to our noble Cause.

Our ancestors would be very proud of you all.

At least we are the ones who are doing something.

Please click below and chip in whatever you can straight away: